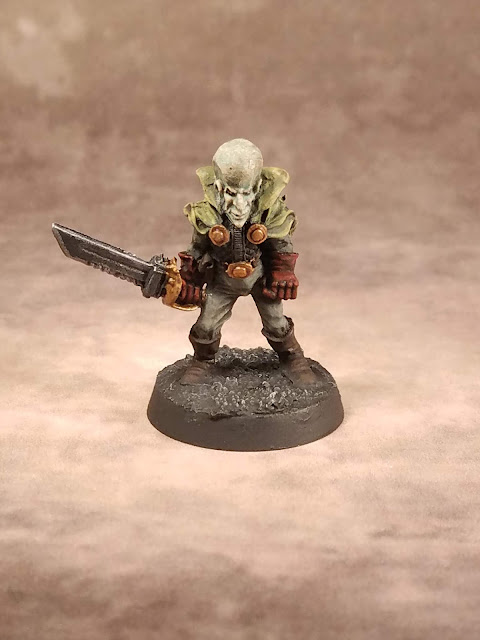 I just wanted to share with you the figure I painted for the #paintabob challenge on the Oldhammer Community on Facebook.

I had intended to also paint a second Psyker and the Keg tappers from Reaper's Dwarven Brewmeister set, but I put the "pro" in procrastinate again. So I onlty finished the one figure.

I still need to work to get things ready for Monolith, and it looks like I'm going to be spending all day next Saturday roleplaying, so we'll see how much I can get done in October. Also know as Olleytoberfest here on the blog.

Back to map making and world building

We're back in the middle of Cross Country season and my daughter has started doing more extracurricular stuff as well, but is not quite ready to drive herself. So I somehow haven't had the time to sit down and blog.

Hobby stuff has been happening, but it's been a fair amount of noodling around with not much completed to show for it.

I thought I would share how my mapping of my old Mighty Empires campaign world has progressed. Like a lot of things in life, I find myself waffling about and abandoning and re-engaging in projects all the time. 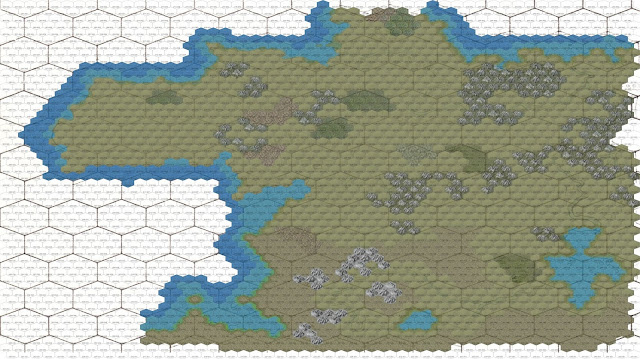 Above is the map with reduced opacity so that I can trace the coastline and see where the terrain goes. Below is the opaque version which does a better job of hiding the polygons I'm using to trace the coast. 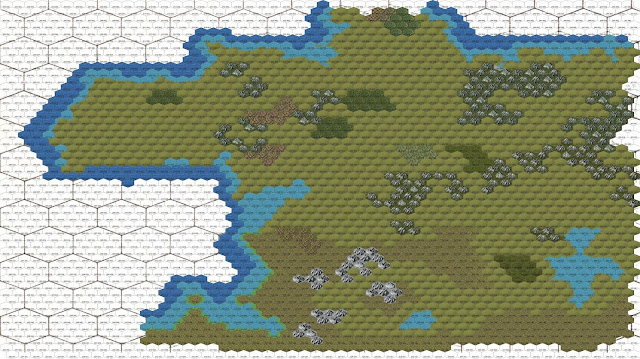 If you have been following my map saga, you may remember I have been struggling with how to scale the Mighty Empires map and make it part of a larger world map. I thought that Worldographer was the answer, and then ran into difficulties that I couldn't get my head around.

I then saw another software on Kickstarter that looked cool and plumped down a chunk of change for that. Of course now the bug was back and I reopened Worldographer and started noodling around with it. After a few calculations, and many failures, I think I figured out a scheme. I got on the forums and worked out a little of the things I needed to understand better to work around.

I am currently redoing the coastline, fixing which hexes are land and sea and then adding a polygon to make the coastline. My rule of thumb is the hex has to be at least half land for it to be a land hex. I then make either a land or a sea polygon to make the coast. I will probably adjust the shapes of the other terrain with polygons to make them less angular as I progress. I also need to adjust the terrain a little bit and play with the hex stats, such as elevation.

I ran the auto generated coast tool on it, but I am deleting most of those polygons so that I can match my original map.

PS - Each hex is 6 miles, bath tubbing the size of Mighty Empires I think. I went with the convention of 4 sub hexes per large hex. So going up to the Region level will give me 24 mile hexes, Continent will be 96 miles, World 384 miles.
Posted by Sean at 4:52 PM No comments:

A new Comic from photo method

So I've learned a new method for making comics from a photo. I watched a video from the Photoshop Training Channel on Youtube and I liked the results.


To try it out I took my favorite picture from Monolith Con last year and tried the new process on it.

Above you can see (From L to R) original photo (tweaked in light room), Old comic method (Poster Edges Filter and Exposure Adjustment Layer +0.33), and the PTC method. 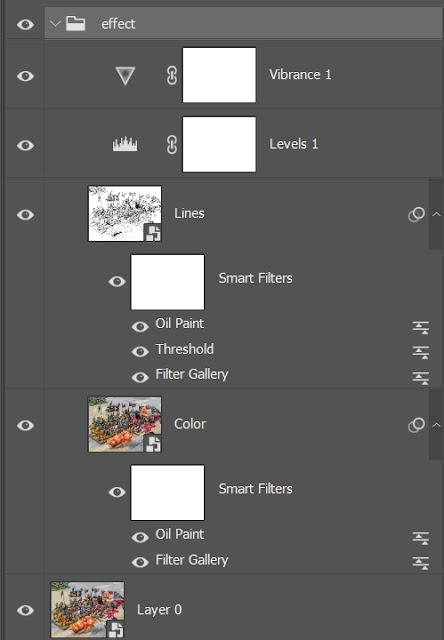 This is the Layers panel showing my workflow. It was interesting using the Smart Object feature, I don't know how long it's been around, but it was my first time really using it. Very useful. The Color and Lines Layers are just duplicates of Layer 0 that were renamed and then the various filters applied. Lines and Color are essentially the same. The Threshold filter is adjusted to make it line art and then the Layer Mode is set to make only the lines show (Multiply).

I was able to use this file as a Template to create the Termintor:Apotheosis comic by editing the Layer 0, click on it to open it up and then paste in a new image. The one thing I haven't figured out yet is how to get rid of the rescaling of the original image. I had rescaled the Dragon rider a little just to follow the tutorial. I seemed unable to get rid of that scaling once back in the main image. I'm not totally sure why that is.

Just a note. The Vibrance adjustment is what made it really pop. A great way to easily pump up the color in your image.

I hope you found this useful and/or informative.

Thanks for looking.
Posted by Sean at 5:00 AM 4 comments:

My last report from BOYL 2019. The Sunday game was a relaxed affair as we were all winding down from a tour de force weekend. Cheetor ran this game using the rules from some boxed Terminator game. I can't keep it straight which one it was, but the figures and terrain were great and the rules pretty straight forward.

After a quick explanation we were off to save the future, or was that the past? Who knows? 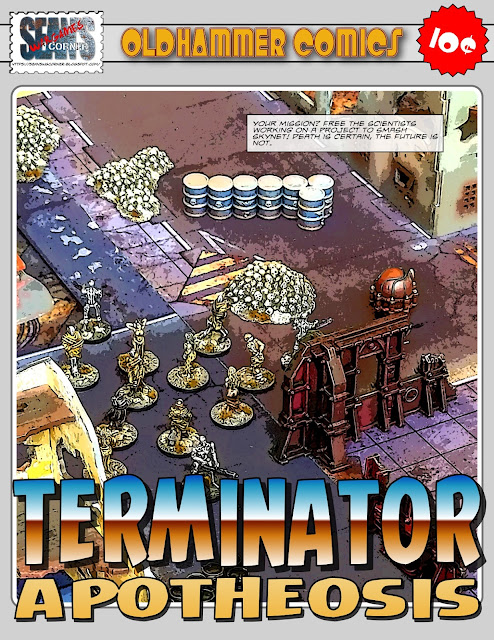 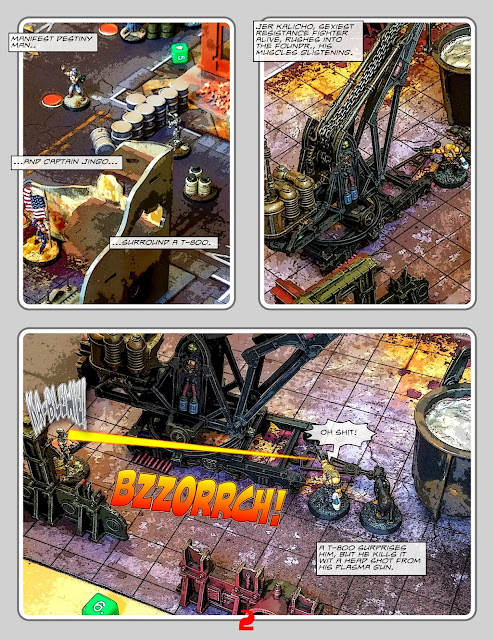 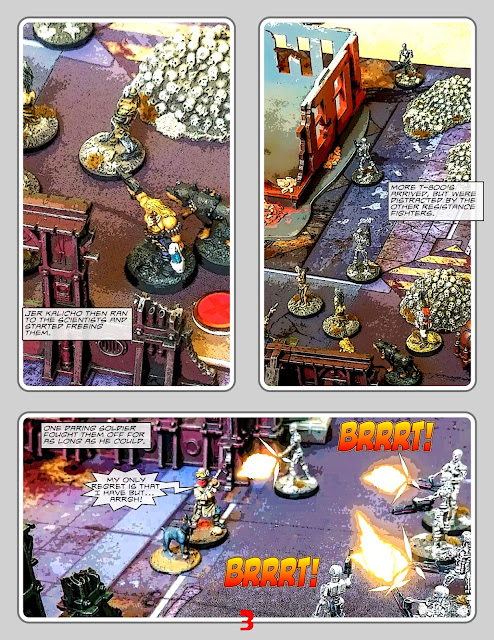 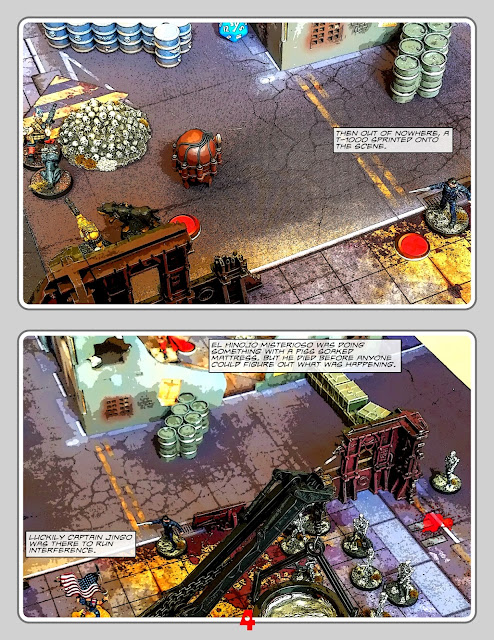 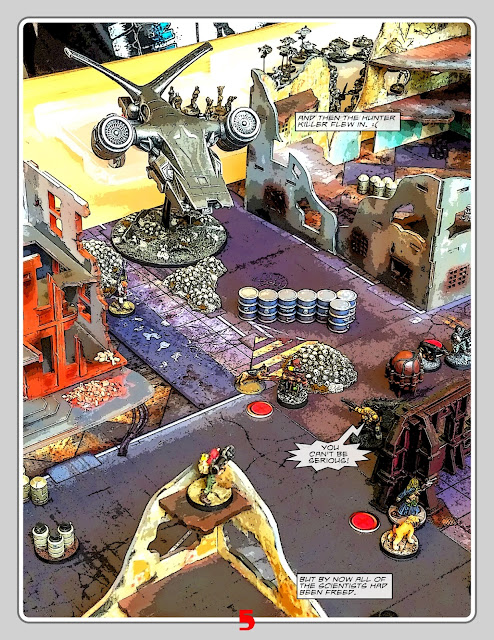 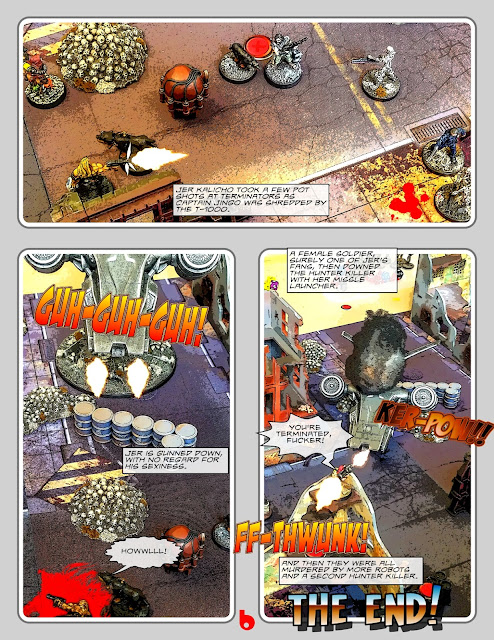 On a technical note, I did all the comicifying and special effects in photoshop. I think I need to work on the technique a little more, but I like the results overall. All the text was added when I did the panels in Comic Life 3.

I'll most likely post a little bit about my new comic process and then hopefully about stuff I'm working on for upcoming games.

I thought I'd just take a moment to talk about how I modeled my Ash Waste Racer for the game at BOYL 2019.

For me it started with the fact that I knew I had some damaged Flagellants somewhere in the lead pile from an EBay purchase. 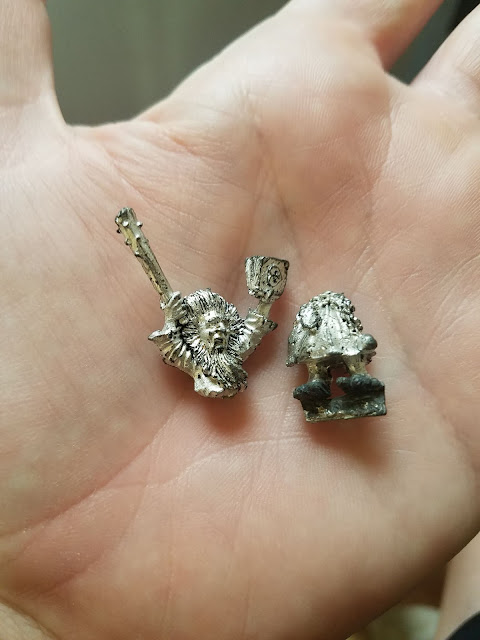 After stripping the figure I took my jeweler's saw to the bottom half and split it up the middle. This was actual more difficult than I thought it would be. 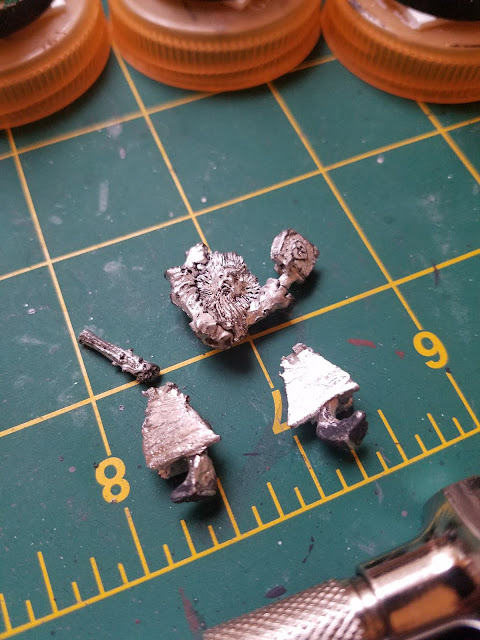 Next I had to source a mount. Terror Birds, Giant Insects, Dinosaurs had all sort of gone through my mind. I finally settled on a Basilisk. Who doesn't love a giant, 8 legged, lizard? I narrowed it down to two, but there was really only one option. The Reaper Basilisk sculpted by Bob Olley.

So some snipping of back spines, a few pins to hold things in place, and a weapon swap to make him "sci-fi" and Bob Olley's your Uncle! 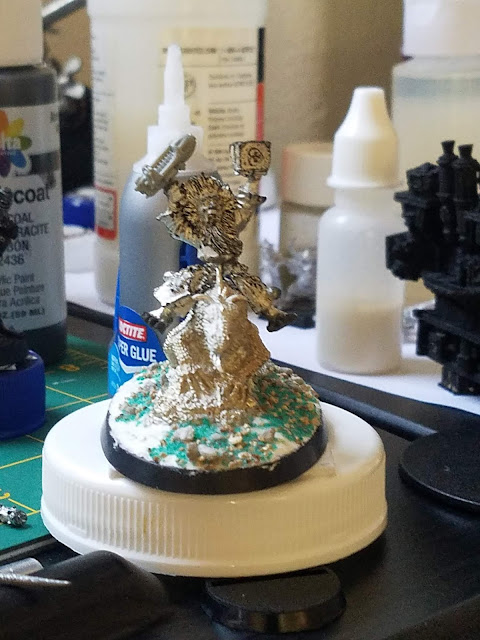 If you were following my progress in the run up to BOYL, then you know that I procrastinated a lot and was very pressed for time. I quickly abandoned elaborate ideas about stowage and ended up fashioning his saddle from some cut up popsicle stick. I still don't know where I put my plasticard. 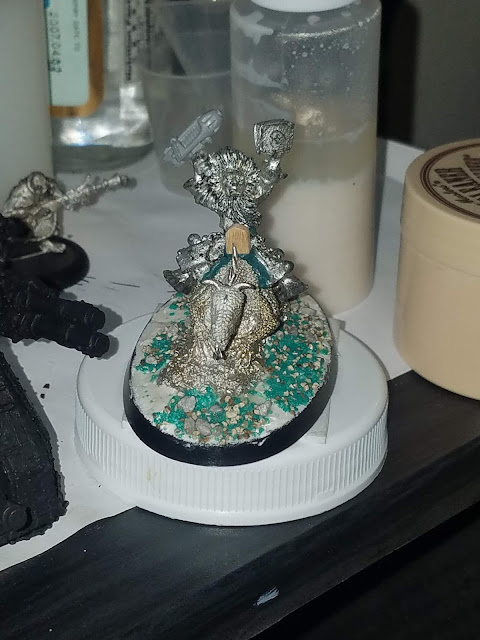 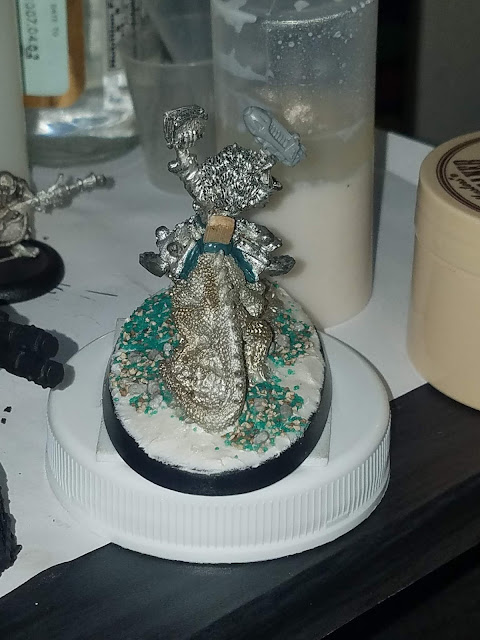 Anyway, a little greenstuff to hide gaps and hold him on a little firmer. I may have gone a little overboard. Then black primer and paint to look weird and grubby. 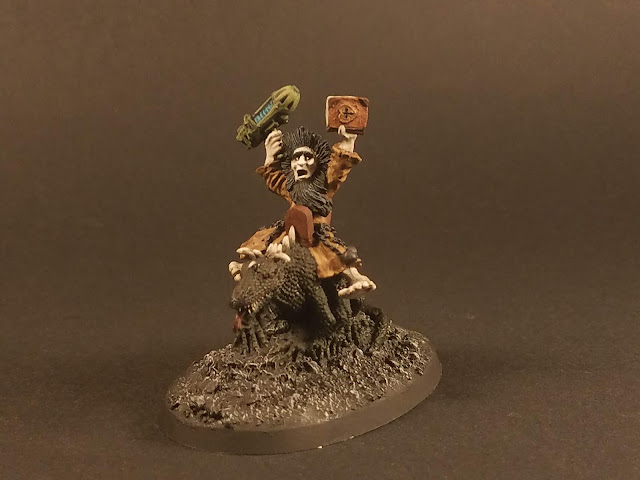 I don't know why, but painting the eyes black (or dark brown) and dotting them white always goes much better for me than white with a dot of black.

Thanks for looking. Happy hobbying!
Posted by Sean at 5:00 AM 2 comments:

For the final game of BOYL Saturday we were treated to a race run by Axiom of Magpie and Old Lead. Each player converted up their own rider and mount for some apocalyptic wasteland mayhem.

What follows is my somewhat sketchy account, in comic form. I hope it comes across as fun as it was. 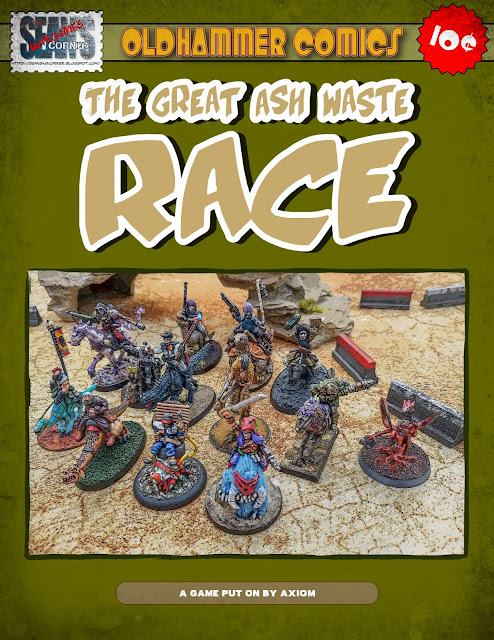 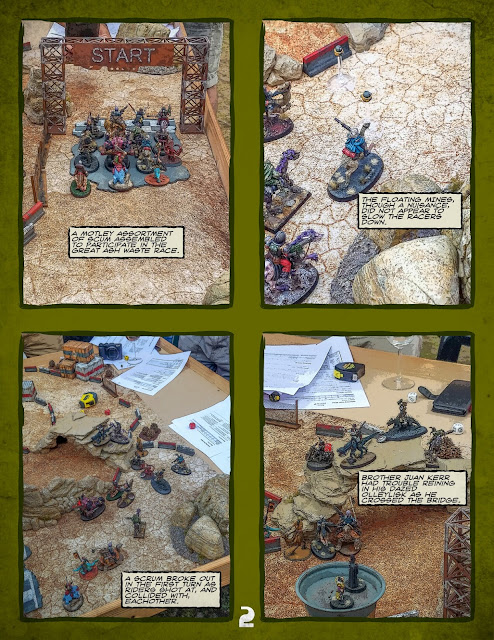 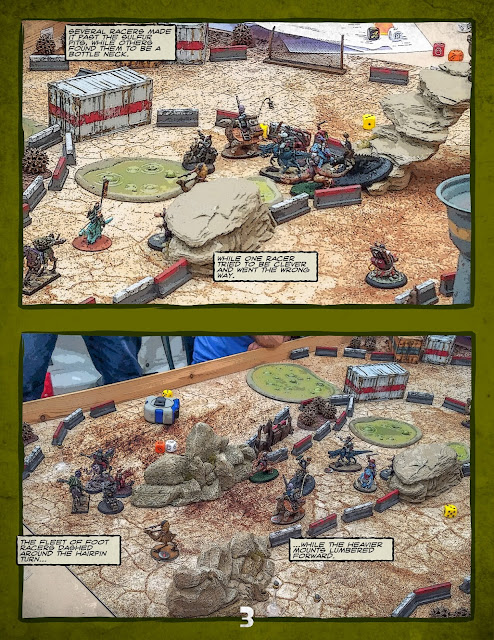 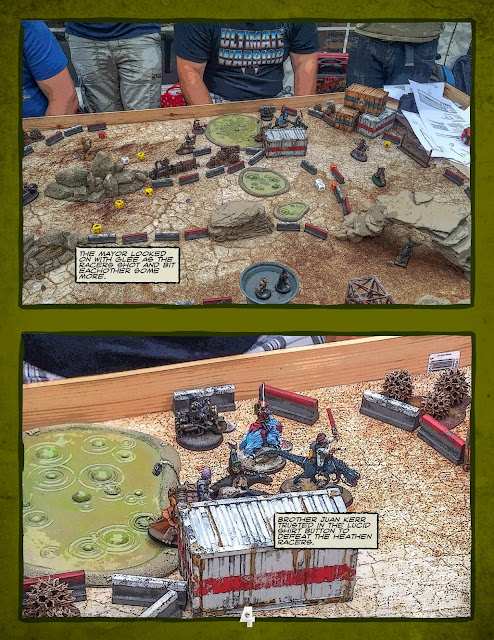 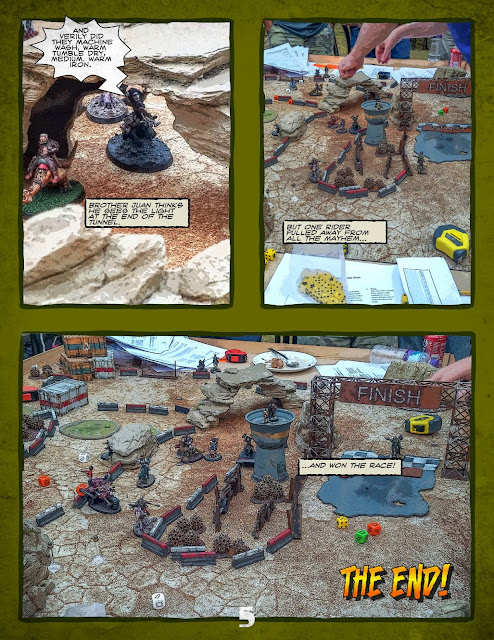 Well done to Whiskeypriest on winning the race. Poor Mr. Saturday came in second because everyone was taking pot shots at his award winning figure, even yours truly.

Anyway, Axiom is a cat herder extraordinaire, and kept a huge game running smoothly. Next up I'l probably do my Racer build log and then a talk about a new method for comicafying photos that I've learned. This will give me time to try the new method out on my last BOYL report, Terminator: Apotheosis.

Thanks for looking.
Posted by Sean at 8:52 AM 4 comments: