A quick one before I make dinner and get ready for trick or treaters. 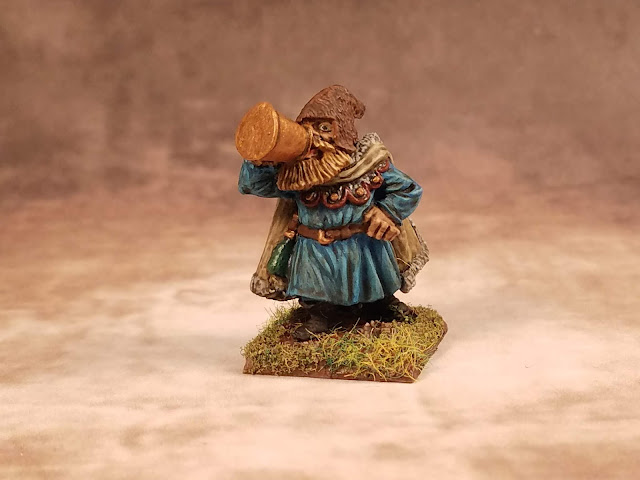 A little bug eyed, but the first time in ages I've actually painted a black eye dot with a brush. The apes, with their white eye dots so successful, gave me the courage to try this time. 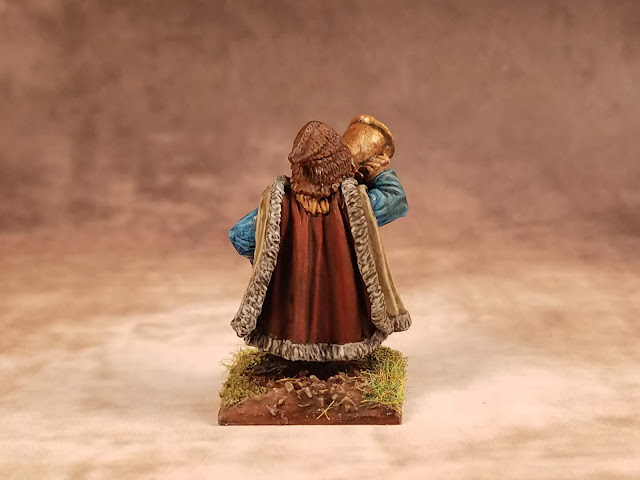 Perhaps I dirtied him up a tad too much with the grunge wash. All the paints were reaper except for craft paints on the base.

It was fun to work on a single figure and get him finished. I probably could have done him in fewer, longer sessions, but it was nice to just work on him a bit at a time as time allowed over the month.

You can still purchase him, and his barrel toting compadres here.

If you painted any Olley's or found any painted ones in your collection that you want to share, let me know.

I'm trying to push out the Oldhammer in the New World Zine #3 in the next day or two, in time for Oldhammer in the Jerz 2. I'm just polishing the last bit of the work I did and then abandoned at some point last year.

Thanks for looking and commenting.
Posted by Sean at 4:04 PM 18 comments:

Close to being finished on the Dwarf Brewmeister. 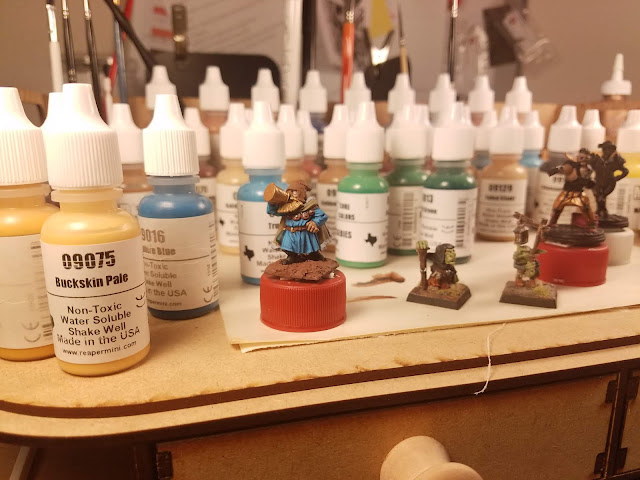 The goblins are figures that I finished a long time ago that needed their bases touched up. Then a couple of hero forge figures I have on slow burn.

Aidan had his final regulation Cross Country race of the season. Ran an unofficial 11:29 3K. Came in first place with a 9 second PR. Building off a great track and field season.

Thanks for looking and commenting.
Posted by Sean at 3:11 PM 8 comments:

Been super busy the last 10 days or so. Saw the new Halloween movie with the kids, we loved it. Ate a pretzel the size of my head for Oktoberfest and went to a Badminton lesson with my daughter.

In the mean time I did finish the Umber Hulks/Ambulls. The varnish was acting weird, and I kept finding tiny spots that were missed. Finally I just gave in and called them done.

So here they are. After three times painting varnish on I'm leaving the shiny spots.

For fun I put them around Ape force, which was finished earlier. I submitted all of them to the OWAC Sprint challenge. No real reason, just because I could. 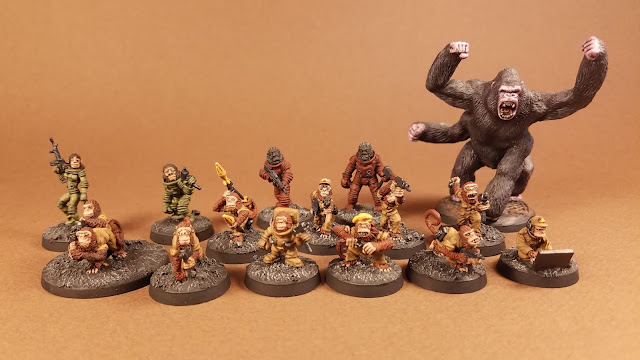 I then thought it might be nice to do an ape family portrait.

Thanks for looking and commenting.
Posted by Sean at 4:58 PM 21 comments:

Late again for Saturday, but it's been a busy week. The boy had a band performance during the week, then played with the High School band during halftime at the Football game. Then we ran a Cross Country race in the pouring rain Saturday morning. 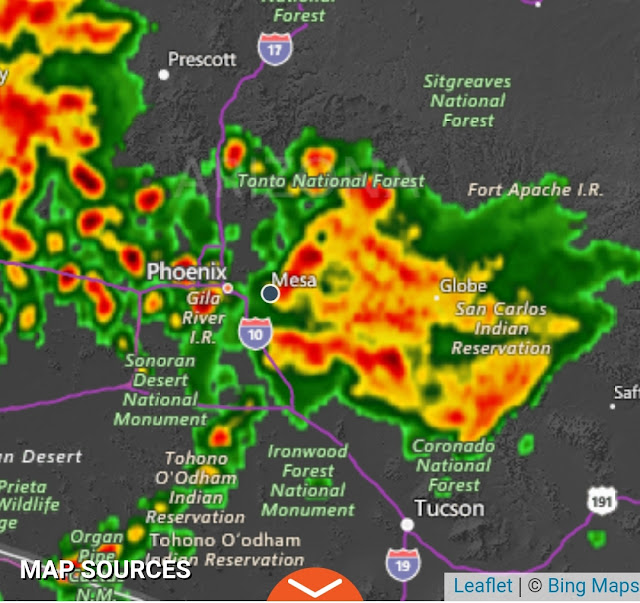 I've gotten several layers of drybrushing on the Umber Hulks. It's not looking quite where I want it, but I'm not going to worry about things too much. 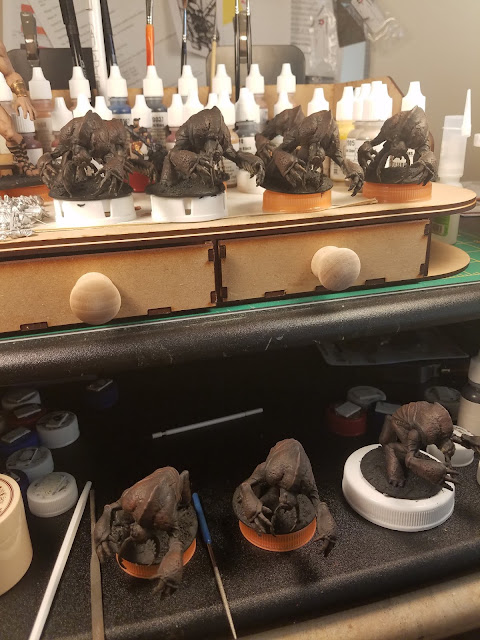 I also got the Olley Dwarf Brewmeister on his base and used a spot of Squadron Green Putty to try and cover the mold line in his tankard. 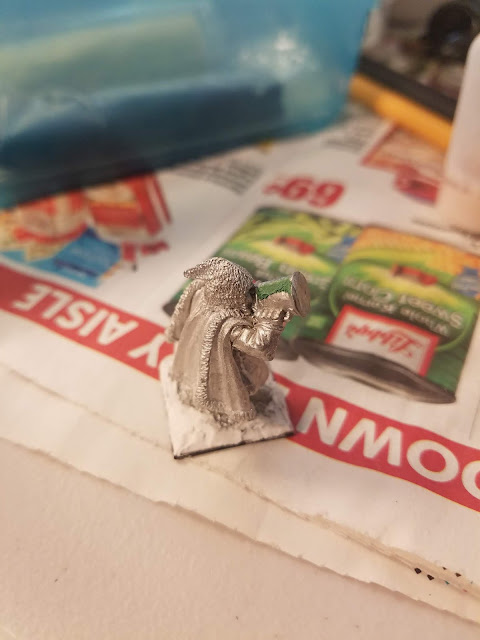 I've since filed the putty down and added sand paste and grit to the base. Should get the paint on him this week.

Welcome to Dave Brewster, if you have a blog let me know and I'll link to it. I'm guessing you may be the daveb that commented on the RoC post.

As always, thanks for reading and commenting.
Posted by Sean at 5:31 PM 9 comments:

We rolled up some RoC war bands

So my son has been read the Realm of Chaos books here and there for a few weeks now. It's interesting the things he is picking up on and showing me as he looks through them. I have never really sat down to read them but just picked through the books at various times when a question occurs to me and then forgetting what the relevant information may have been.

What follows is how we rolled our war bands. Did we do it right? Probably not, but the process once you have the two books in hand is somewhat chaotic. ;) 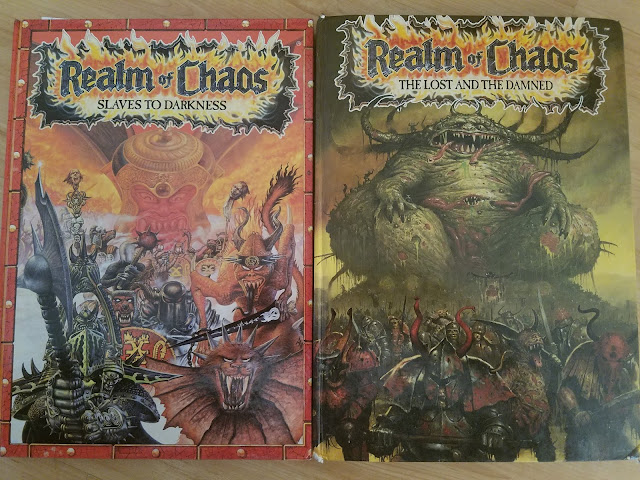 Slaves to Darkness has this handy dandy chart, but it's still not really a guide to how to roll things up and the "instructions" in various sections have you jumping round the book. 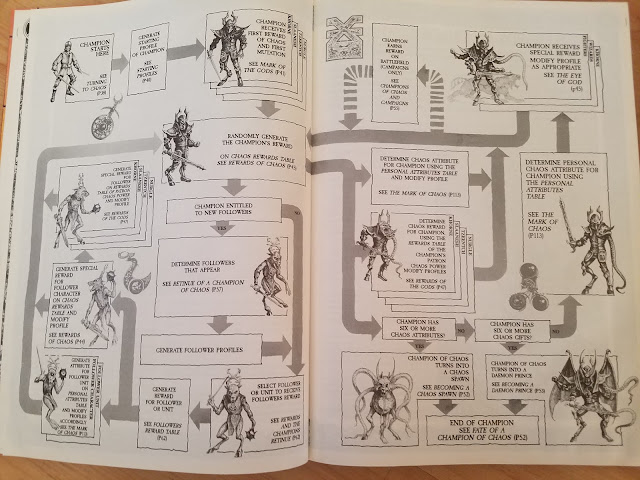 In the back of the Lost and the Damned they have all of the charts you need to roll things up. 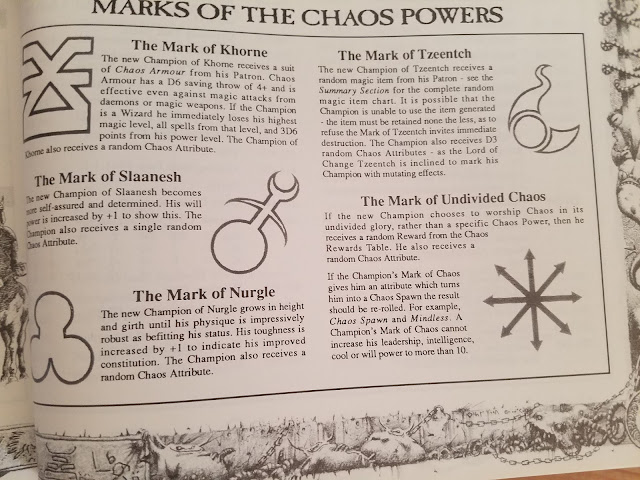 One of the things that confused me was this blurb about the marks of Chaos in the back of Lost and the Damned. It appears to be more specific with "Mark of Chaos" one receives.

Here's what we did. It may be horribly wrong, let's look. Shall we?

First we need to select our champion. The Road to Power section on pg 38 of Slaves to Darkness seems to be the place to start. On pg 39, in How the System Works it states "A Champion of Chaos begins life as a randomly generated profile." and later "immediately receives two rewards from his patron Chaos Power: one Chaos gift which depends on the god, and a chaos attribute." I'm getting slightly ahead of myself here.

On pg 40 (StD) we have the starting profile table. One chart each for Chaos Dwarf, Dark Elf, Human and Other. If you had a plan in mind, ie a figure ready to convert or use, you might just pick one. We like to put our fate in the hands of the dice gods, so we rolled. We both rolled Chaos Dwarves. Fitting I think, as I have zero Chaos Dwarf models. He rolled a regular Chaos Dwarf, I rolled a Level 5 Hero.

The next step is where I got a little, and still may be, a little confused. StD pg 44 Rewards of Chaos reiterates that you give each champion on attribute and one gift from his patron. Then further rewards can be earned during a campaign. On pg 45 is the Chaos Rewards Table. The same table, in a slightly different format, can be found on pg 50 of LatD. Then there are the "gifts of the various powers. In StD they are still called rewards, in LatD they are called gifts. StD Khorne pg 47, Slaanesh pg 50. LatD Nurgle pg 51, Tzeentch pg 54. LatD also has them all together in the Summary on pg 284.

I think we started by rolling up my son's champion and then that Marks of the Chaos Powers box from pg 281 of the summary in LatD got my attention. My son wants to follow Tzeentch, so I chose to Follow Khorne as an obvious adversary. So if we look at what it says for Khorne and Tzeentch we get that my Chaos Dwarf has Chaos Armor and one random attribute. I rolled 033 Beaked. I then also rolled for a gift, I see now that the Chaos armor is probably the gift, but I got 54 Frenzy. Aidan's champion received a magic rod of Tzeentch and 3 (rolled on a D3) Attributes. He rolled 452 Headless, 279 Cloven Hooves, and 319 Crystalline Body. His gift was 22 Face of Horror. So again, I'm not sure if rolling for the gift after taking the item was the right thing to do, but since we both did it  they come out in the wash.

With the Champions covered it was time to figure out our retinues. This can be found after the Campaign section in StD, Retinue of a Chaos Champion pg 57. The specifics are on StD pg 58. It says "For every two rewards (attributes or gifts) ... consult the following chart. It's a D6 roll you have a chance for 0-2 rolls on the retinue table. My son rolled up 2 Minotaurs. I rolled up a Chaos Warrior. So then I had to give him Chaos Armor (Khorne) and then I did some thing weird again. I rolled on the rewards table and got 61 Gift, I then rolled 92 Eye of God and got Collar of Khorne and a Fleshhound since he had less than 6 rewards. He then also got another roll, which was 71 Gift, and rolled 51 Chaos armor. So now his Armor is fused to his body and he has a 3+ save. I then rolled 28 Attribute and got 506 Invisibility.

So the question here is, did I do the retinue guy right?  As I look at it now, probably not. I think it should probably be Chaos Armor and roll an attribute. I feel like rolling on the Chaos Rweards table is what you do after a battle in a campaign. I see it states that on pg 55 of StD.

Any thoughts? Have you rolled up a Chaos Warband? Do it differently than I did here?

Thanks for looking and commenting.
Posted by Sean at 9:22 AM 7 comments:

Primed the Umber Hulks with craft paint and brushed it on. If I added water to thin the paint it would bead on the plastic. So it took a long time to get good coverage on each model. I still have to go back in with a small brush and hit all the little spots that somehow didn't get paint in them. 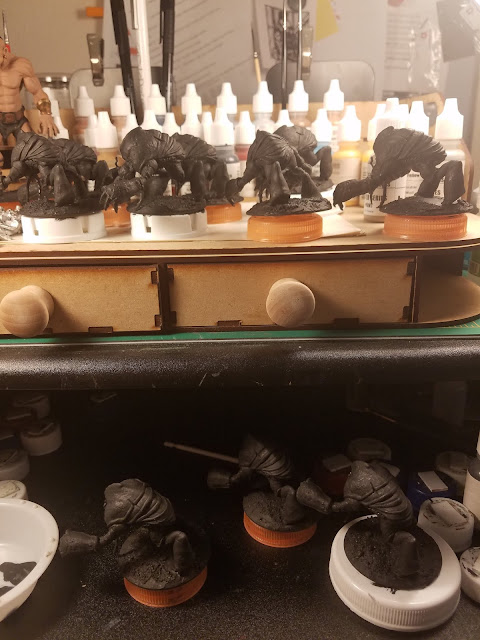 I intend for these to be rough drybrush along the theme of the other monsters I did, so not the exact color as the Knightmare Ambulls. We'll see how it goes, I have to look back at those posts to remind myself of the paints used.

Thanks for looking and commenting.
Posted by Sean at 8:25 AM 7 comments:

Time to get serious.

One of the many topics that I tend to chat about with facebook friends are Bob Olley figures. Some people love them, some people hate them. One cannot deny that many of the Iconic Oldhammer figures were sculpted by Mr. Olley and he has been super prolific as a sculptor.

It took me awhile to find it, but here is the link on CCM wiki that puts links to all of his stuff in one place. So it got me thinking. Wouldn't it be fun to celebrate the sculpts of Bob Olley in the month of October? I know, there's already Orctober, Zom(b)tober etc, do we really need another themed project in October? No, but so what?

I feel like I have more goblins, but I'm not sure where they've gotten to.

Next? Pick an unpainted Olley in your possession and paint it. Old, new, doesn't matter. Just give us the low down on where you got it, especially if it is a newer one still available for purchase, and why you want to paint it. 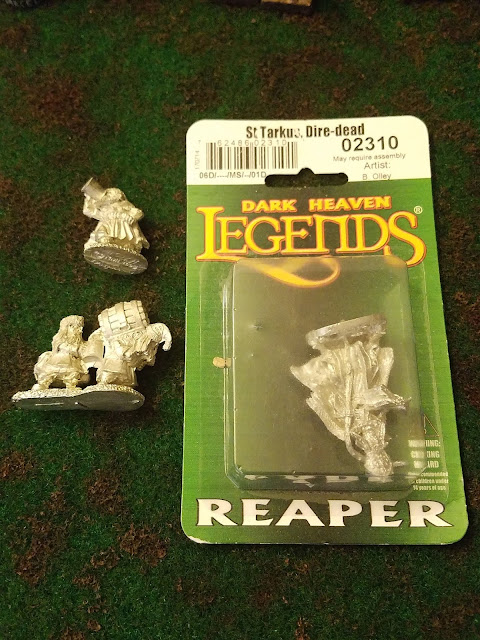 Reaper Dwarven Brewmeister and St Tarkus. Here is a link to a search of Olley sculpts on the Reaper website. My inention is to paint the Brewmeister, hence the de-blisterification.