So the upshot is if you want scale rulers buy them from here http://www.rulers-of-the-world.com/index.html

I think I will since I seem to be having some kind of issue with how big to make terrain for 1/72 scale.
Posted by Sean at 1:29 PM 2 comments:

Email ThisBlogThis!Share to TwitterShare to FacebookShare to Pinterest
Labels: scale

As I flail about, trying to play my first raid, I made this map. As usual I am trying to learn several things at once and not fully accomplishing any.

Eorund had decided that in order to test the mettle of his band he would perform a raid along the coast of England.
So the trip is successful on a roll of 3+ and I rolled 3 (+1for Norse sailing, +1 for Gautar's Navigating skill. The trip thus costs 25, 1 for each man and so the band has 44 left in it's coffers.
They will attack the sleepy Saxon hamlet of Eadagbrycg (to me sounds like Eat a Brick). 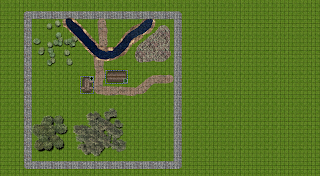 The idea is to be representing a 3' x 3' table (bounded by cobblestones). The rough patch at top right is a hill and the river is fordable at the road. I used THW (Two Hour Wargames) terrain table to roll it up and then added the two buildings. Each square in the grid represents an inch of table top.
Posted by Sean at 1:57 PM 2 comments:

As requested by Paul from the mancave, here is a generic version of my Age of Blood Campaign map. Feel free to use it for your own campaigns. It is still a little rough but not too bad if you don't look too carefully.
Skal! 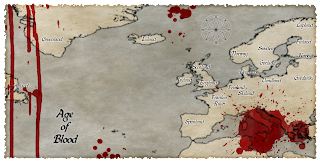 Got back from LA last night with an interesting drive. Hit a small dust storm with about 15ft visibility and some rain which dropped the temp from 103F to 80F by the time we hit Phoenix. The West bound I-10 was not as uneventful. Saw two big rigs overturned and another that had rear ended a tanker.

So have a happy and safe 4th.