Paint Table Saturday 225 - Ever closer on those Bretonnians

I would love to post more, but seem to only be able to post once a week. Here's what's going on on the painting desk. 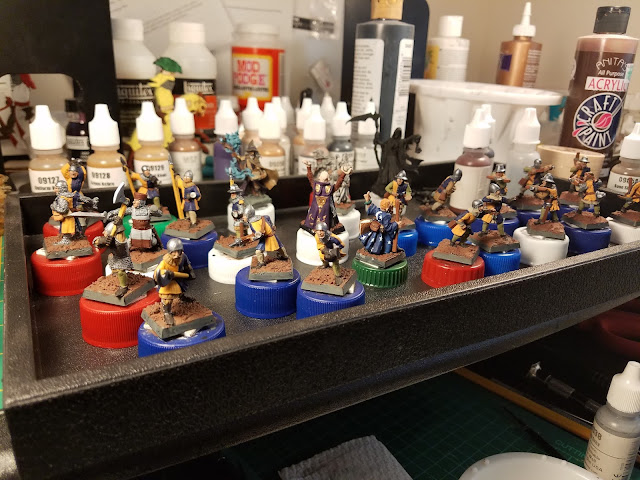 Still the retainers and wizards. 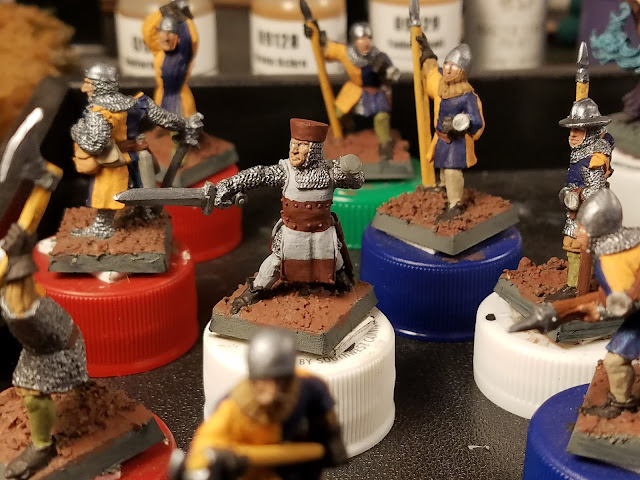 I finally got all the base colors on the Baron. 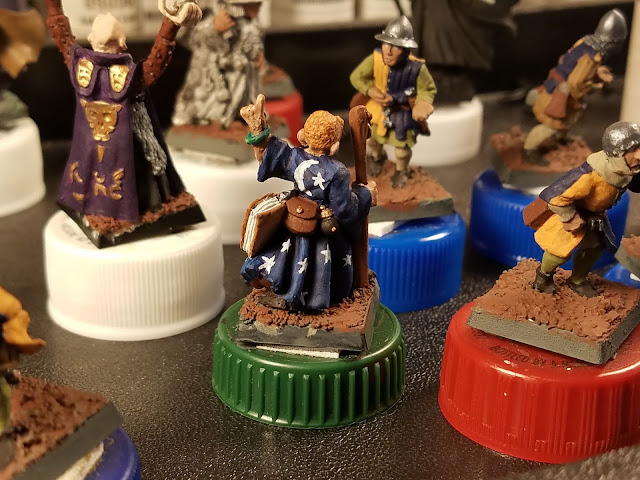 Decided to free hand some stars and a crescent moon on Holbon to make him more wizardy. 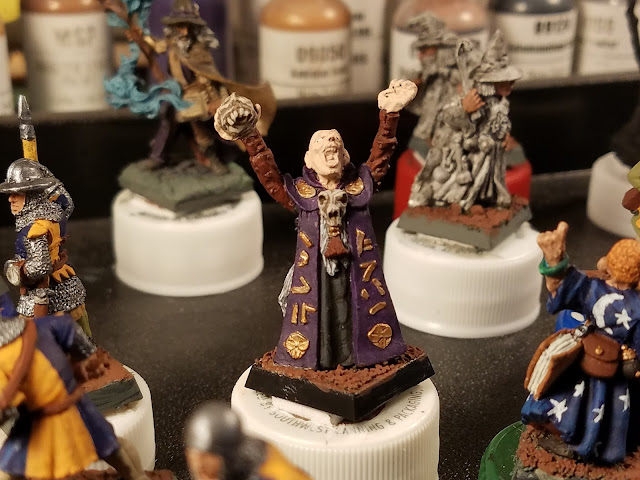 Mazda need some highlights and his mouth painted, but he's pretty close to done too. I'm just slogging through these today as I want to finish them up so I can post them to the challenges by Monday.

Also a hearty welcome to Scott Templeman. I saw you a few weeks ago, but forgot to welcome you in the last post. As always, if you have a hobby blog I can link to, let me know.

The weeks seem to be flying by. I'm getting a little bit of hobby time in the evenings while we watch the Winter Olympics. I've never really been very engaged in the Olympics in general but I'll follow on occasion.

Anyway, put paint on a few areas here and there. 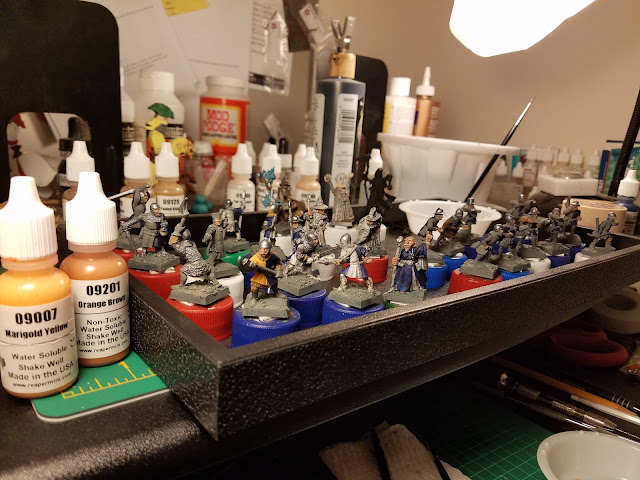 Did all the base flesh, base and highlights on the padded leather and a base coat for the Blue. As you can see I went with a Blue outer robe for Holbon Toddlebrew. What may not be as clear is that I over painted the old flesh on all the retainers and wizards with Reaper Tanned Shadow, partly to be challenge compliant and partly because I feel like the old flesh color is a caricature of itself. For Mazda I tried the Fair flesh tone. I want him pale, but I didn't want to do more Vampiric flesh.

The other thing I tried just yesterday was putting down a layer of Orange Brown over the Grey primer and then putting the Marigold Yellow on. I think it works better than multiple coats of Marigold Yellow that just leave me frustrated.

I just realized that I forgot to share the finished Ape pictures on the G+ page, so I'll do that.

Happy Year of the Dog. We went out for Lunar New Year dinner last night with friends, it was great.

I think I've passed the 24 hour window so I can share my four armed Ape with you. 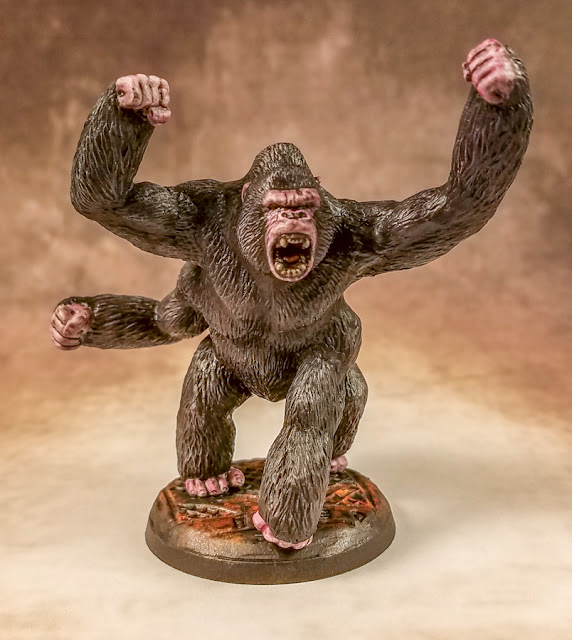 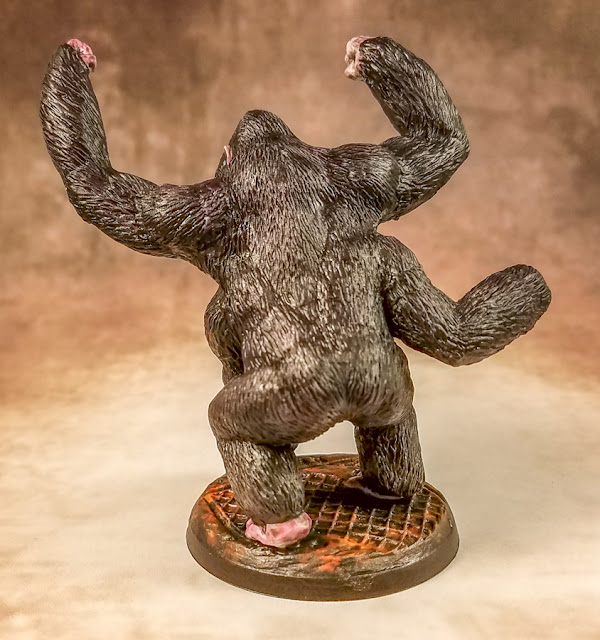 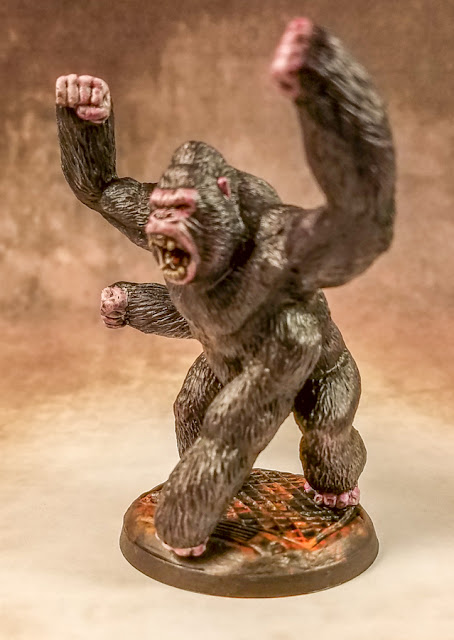 He is a resin affair from Bombshell miniatures that no longer appears to be available. I took the opportunity to use my Mesh roller from Green Stuff World for his base. I thought the whole roller was one contiguous pattern, but it is multiple different mesh patterns.

As I said in the original post here, I always wanted him purple as an homage to Grape Ape, but had thought about him having whiter fur. I chose not to do that as that is a very common scheme and I wanted his flesh areas to contrast more.

I don't know what happened with the varnish exactly. This is the first problem I've had with Galeria. Perhaps I don't keep my varnish bottles mixed enough because a similar thing happened to my Liquitex matte varnish where it just seemed too shiny. I'll keep you posted on any developments.

I forgot to share this with you yesterday, track season has taken up a lot of my time and energy. We had to drive an hour for yesterday's meet, but I think my son got another personal best in the 3000m. I'm glad, because I had to drive around town to exchange his new track shoes for ones that actually fit. It seems we misjudged and only bought a half size bigger for this season.

Any way on to the minis. 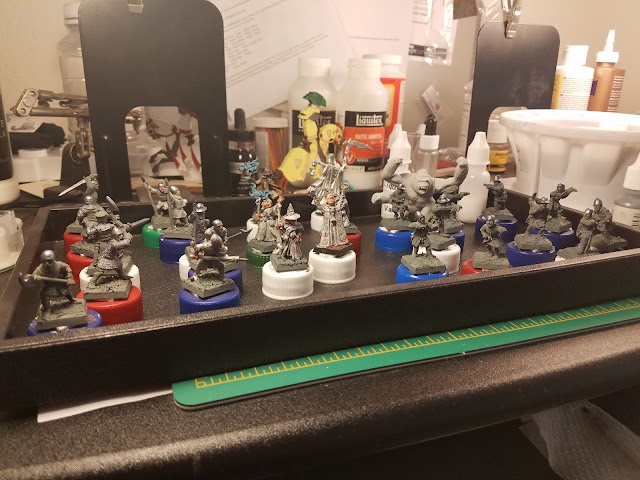 Still prepping and base coating figures. I gave all of the C02 wizards an ink wash to bring out the detail. I'll probably be painting them up randomly. I will be painting over their flesh, so I am just pretending it's flesh primer for challenge purposes. I've already repainted the metallics over the 5 or so retainers that had metal painted. I also glued together the resin Ape from Bombshell miniatures (I think). I used some runnier super glues and almost glued my fingers together, twice! 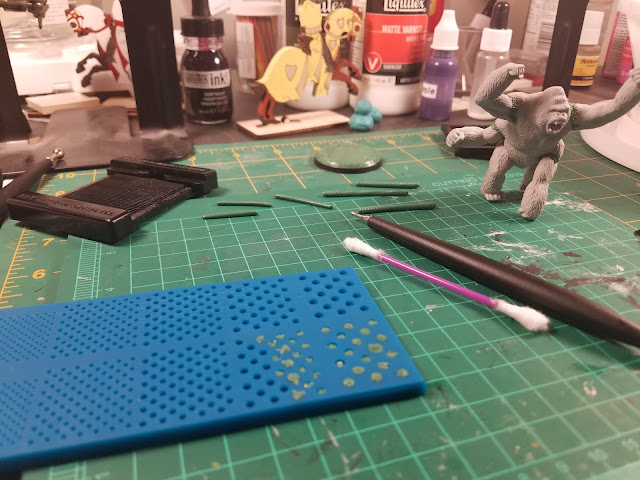 As usual I made way too much green stuff for filling gaps on the Ape and making a green stuff base for him. Not pictured is the Greenstuff World Roller I used for that. Also you can't really see the mesh pattern. I then tried to make more hex rivets and use the roller to make cables/worms. I think I didn't evenly coat the roll maker with vaseline, it seemed to stick on one side. So I need to work with these things more.

Anyway I hope to get this Ape finished today or early tomorrow. I've got a simple scheme in mind for him.

Happy painting everyone.
Posted by Sean at 10:37 AM 9 comments:

I showed you what was on the table yesterday here. I wanted to share the finished Knights with you all today. Since there was some discussion of editing photos, I'll show the edited and unedited versions. I took these with my cellphone. 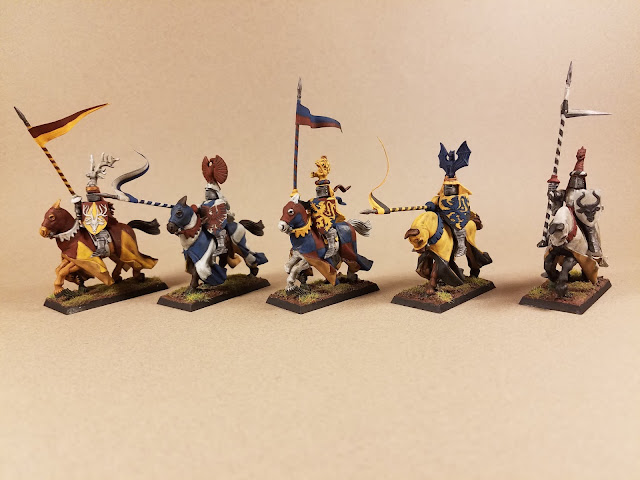 We were also instructed to share a picture of our army thus far, since we are at the midway point in the challenge. 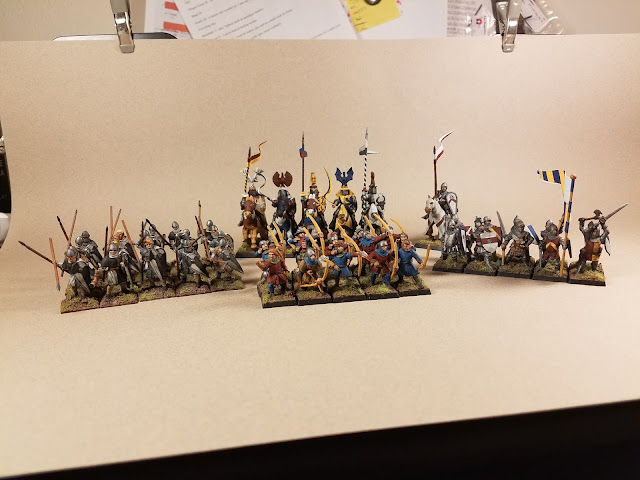 So there you have it. My editing is mostly cropping and then adjusting highlights and shadows to reduce the contrast. Lightroom is the fanciest thing I use. Otherwise these are just a cellphone and some desk lamps.

A lot of stuff to tell you all about. I did end up finishing those Knights, but I can't show you until tomorrow. So I will do that with Paint Table Saturday. After we run our 5K in the morning.

On the desk right now are the old Citadel Men at Arms/ Retainers, a couple of old Bretonnian Crossbowmen mixed with Foundry Crossbowmen, and 3 C02 Wizards. Dormur, and in the back the Grim Reaper from Reaper are also there, but just as filler. 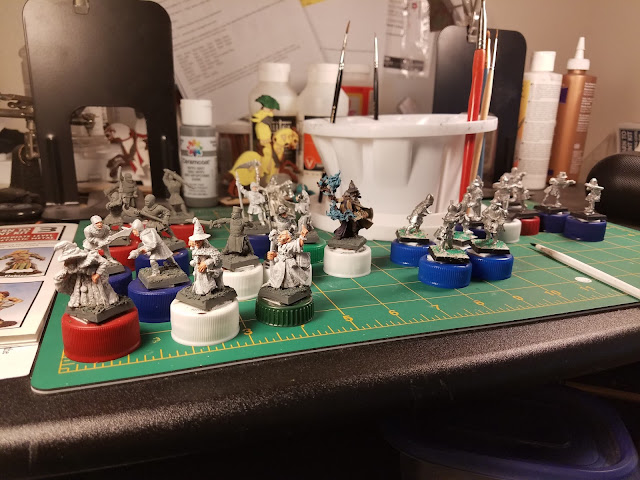 Now I've had these Wizards since the 90's, but obviously never got very far with them. I was looking at them the other day and noticed something hanging from the third guys belt. So I thought I'd do some research.

So you can find pictures of them on Stuff of Legends here. 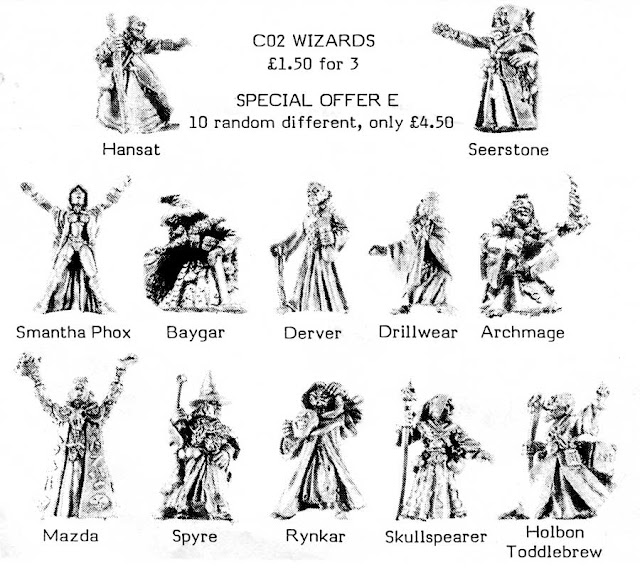 So I have Baygar , Spyre and Holbon Toddlebrew on the desk right now and Mazda packed with my Undead somewhere. What got me curious about researching them was the thing that looks like a calculator hanging from his belt.

Sure enough it's mentioned on his page on the Collecting Citadel Miniatures Wiki, here.

Although I've barely been able to get anything painted for it, I'm also doing the Analogue Hobbies Painting  Challenge. I just missed getting the Knights finished on Monday,  so I couldn't submit them there this month. One of the things that's new this year is that you can submit terrain for scoring. Since I have precious little terrain I thought that would be a good thing to do. I bought the Pegasus Chemical Plant last Summer, but didn't get it in time to take it with me for gaming Shadow War: Armageddon. 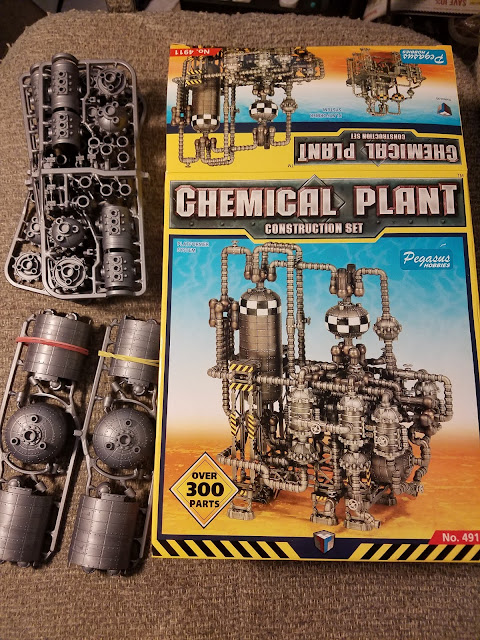 Lastly I refound the band BabyMetal to listen to while I was powering through the finishing touches on those knights.

Chocolate is the main song that pops up, but I like Karate better. They sort of remind me of Melodic Metal bands like Avenged Sevenfold and Dragon Force. I feel like I'm listening to the music for the end credits of an Anime. If you go through their youtube playlist, the one where they sing Breaking the Law with Rob Halford is fun.

Also mixed in their playlist was the group LadyBaby. It's also fairly demented, Ladybeard is something else.

Thanks for looking.
Posted by Sean at 6:47 PM 3 comments: