Very little painting progress as I wrestled with installing some cabinets and a workbench in my garage. 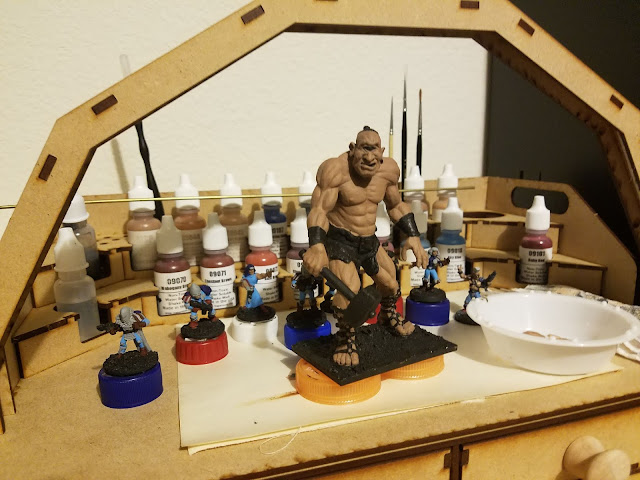 The Cyclops got a couple of base coats of Reaper Tanned Shadow. It was a relatively easy and mindless thing to do while we watched Post Nuclear Holocaust themed movies. Team Terra is giving me pause for color choices, mostly the diminutive leader. There is a lot going on around his head and neck. 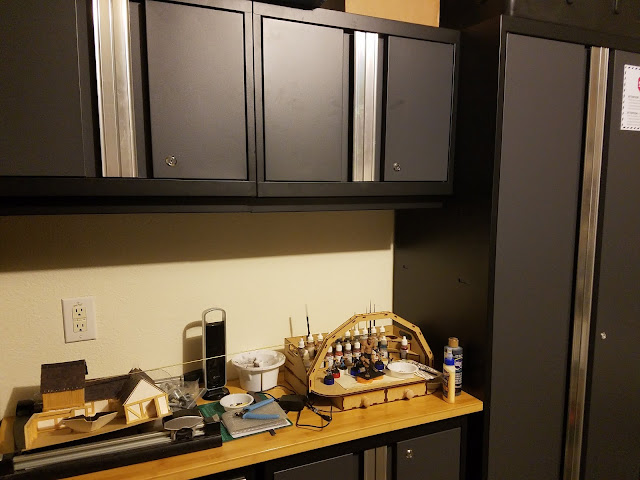 The cabinets I ordered, that came early and I had to leave my son at swim lessons while I raced home to receive the palette. Never fails. Mostly level and square. I also finally put the insulation in the metal garage door. Now all I need is some more lighting, a portable A/C unit and some shelves to help me organize all the junk still in the garage.

Still quite a bit of sorting and cleaning to do. Wish me luck.

Thanks for reading and commenting. Happy hobbying to you.
Posted by Sean at 6:43 AM 8 comments:

After seeing Mario's post I realized I had forgotten to share this weeks painting progress with you.

These are mostly Foundry old Rogue Trader sculpts. On the right you can see my Hero Forge Shadow Run inspired Half Orc Street Samurai, a Judge Dredd Psy Judge and Psycho Sam, who I named Dahn Alt Rump. He's there as a color guide. As you can see we have a Red, White and Blue theme going on. Their job is to find Xeno scum and eliminate them. They're not very nice.

In the close up it may be hard to tell, but the photo is taken on my new gamecraft paint tray with the led attachment light providing the lighting. I adjusted levels in Snapseed, but it came out pretty well.

Not too much else to report. I'm finally clearing out my garage, so hopefully I'll be able to have more game reports from home soon. Amongst the finds? 3.5 computer disks, piles of old power supplies and computer cables and an emerging termite nest that was boring up through a crack in the concrete into a box of books.

Still a lot of work to go, but I feel pretty good about getting over the inertia that comes with looking at a big room full of junk and not knowing where to begin.

Any way, thanks for looking and commenting.

Just before heading off to Denver for JO Regionals; I received my Gamecraft Painting Station, Drawer Add-On and LED Light Add-On. You can see them here. 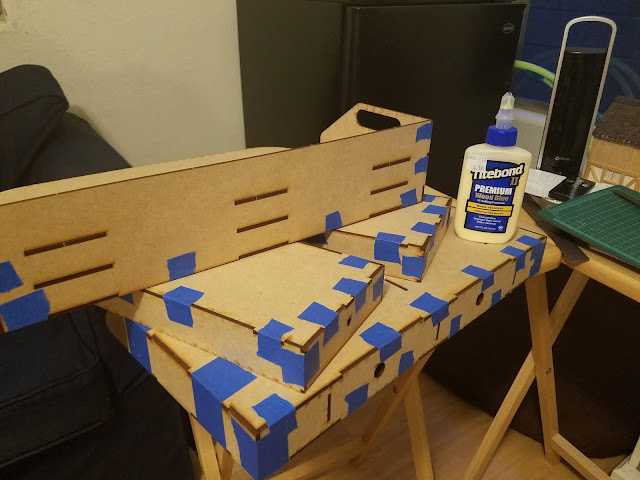 I had dry fit them together before flying out and had an opportunity to watch the assembly videos here. For some reason I could not find any masking tape around the house or at the grocery store, but we still had some painters tape and that did the trick. The nozzle on my wood glue was a little unwieldy at certain points, but I made sure I had a damp paper towel to wipe up the glue overage. I probably made things more difficult for myself by assembling it on my lap while sitting on the couch watching a movie with the family. 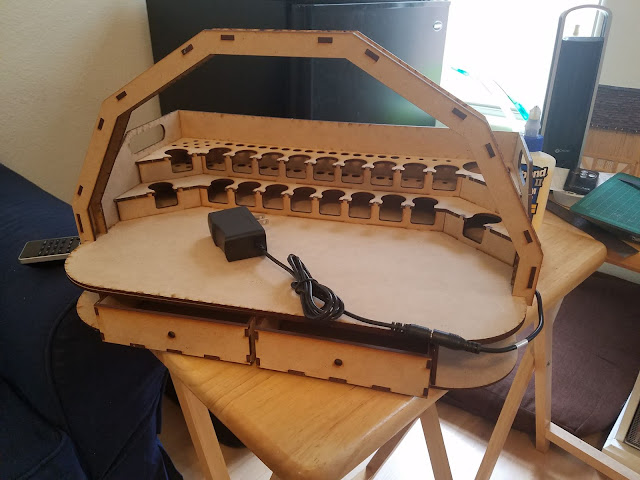 So here it is all assembled and stacked on top of each other. I just have to put the drawer knobs on. This is the 26mm Vallejo bottle version, since I mostly paint with Reaper paints. You can get one that has all 32mm slots for GW pots or a mixture of the two sizes even. The only thing I noticed I didn't do 100% right is the back of the paint tray is not fully flush on there, totally my oversight. Fairly straight forward to assemble and looks like it will help me a lot in keeping projects self contained and easier to transition to different places or speed up set up for things like my WFRP sessions, which I usually do seated at my paint desk.

I bought the three together off Amazon, but I don't see why you couldn't just buy it off the site. I'm very satisfied with the product and service thus far.

Anyway, hope to be painting on it later today. Thanks for looking and commenting.
Posted by Sean at 9:25 AM 6 comments:

A quick one before the lad and I jet off to another track meet. Rochester NY last week, Aurora CO this week. If he places we have one more meet, but it's going to be tough. The competition is super fast and he doesn't usually run his best at elevation. I think the experience of making it to USATF Nationals and Junior Olympic Regionals has been good though.

Anyhow, I finally looked in a box that I had pulled from storage, prospecting for stuff that I believed I had, but hadn't seen in almost two decades. 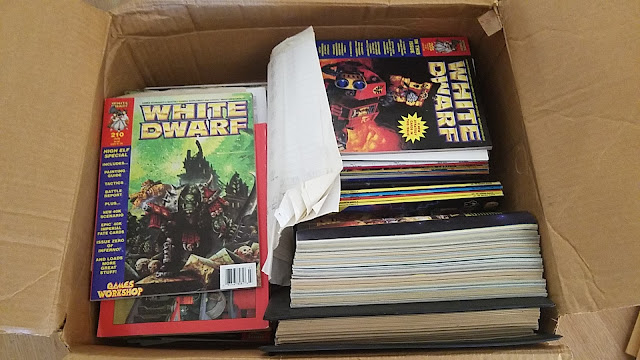 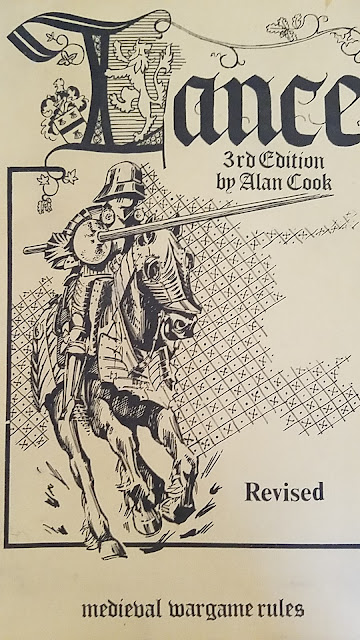 Also found this, I could never remember the game that Charlie and I played before I delved into Warhammer. I remember one massive battle we had on his living room floor with plastic army men. 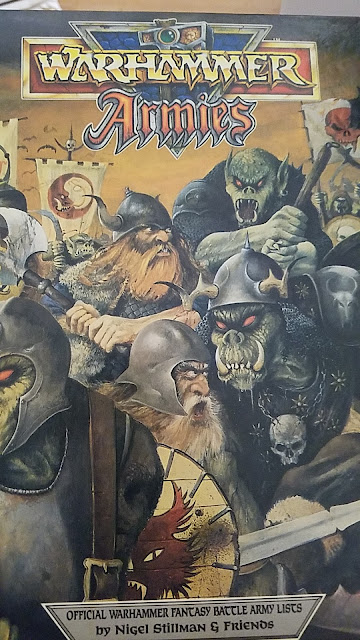 Finally found my hard copy of Warhammer Armies. I knew I had one, just could never remember where it was. Inside were copies of army lists I had made for Bretonnians and some other lists I made for my friends I was trying to rope into the hobby. 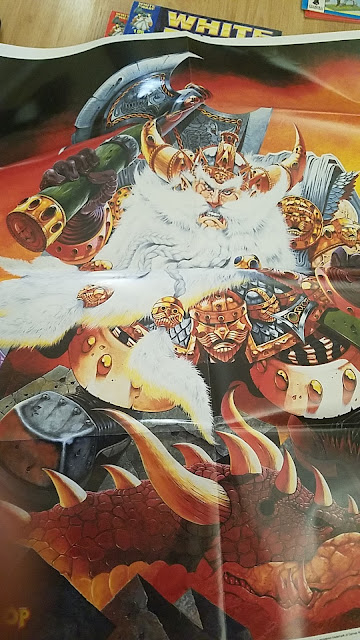 I don't remember this poster at all. 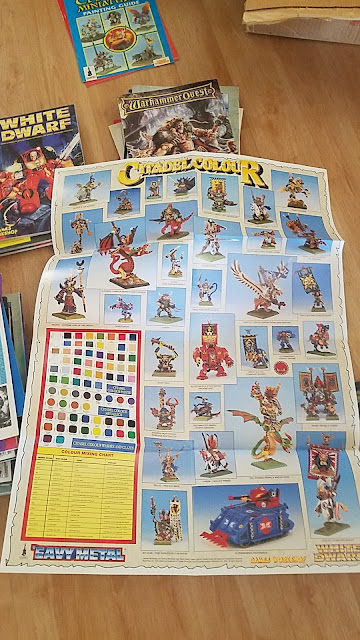 I also found this one. So I'll have to get frames for them and hang them up in my Garage game room. When I get that set up.

Also inside were letters from my friend Charlie detailing his moves for our Mighty Empires campaign, more color xeroxes of my had colored map, and a bunch of notes on another "continent" I made using the Mighty Empires tiles.

It also shows how faulty my memory is. I seem to have been still getting White Dwarfs as late as 1996 and ordered stuff in 1995 for sure. Funny, I thought I had completely given up by 1993 at the latest.

Anyhow, I received some stuff to make a painting tray from Game Craft Miniatures. I'll let you know about it in a future post.

Thanks for looking.
Posted by Sean at 8:22 AM 8 comments: