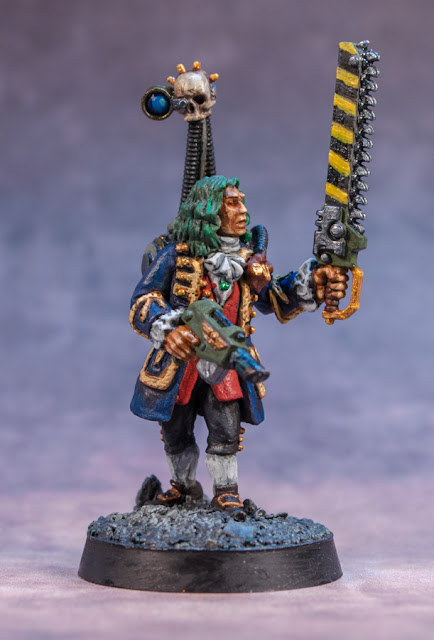 As usual a few good things and a few bad things but I'm very pleased with getting him done. 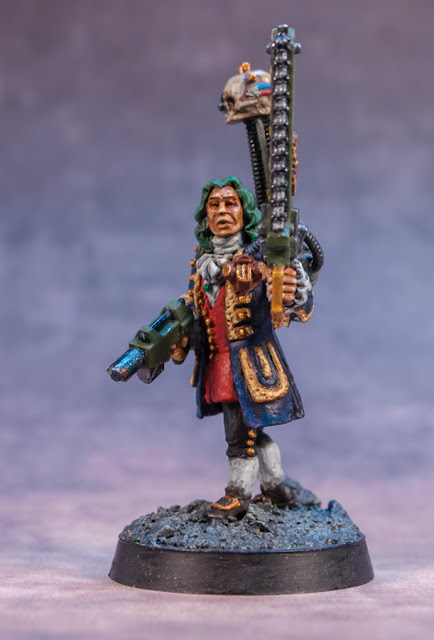 The majority of the figure is Eureka's Voltaire figure. I'm more of a Rousseau guy, but I don't think anyone makes a figure for him. The weapons and servo skull are from the Cadian trooper boxed set, as well as the respirator mask. The backpack and extra tube for the respirator are from Dragon Forge. 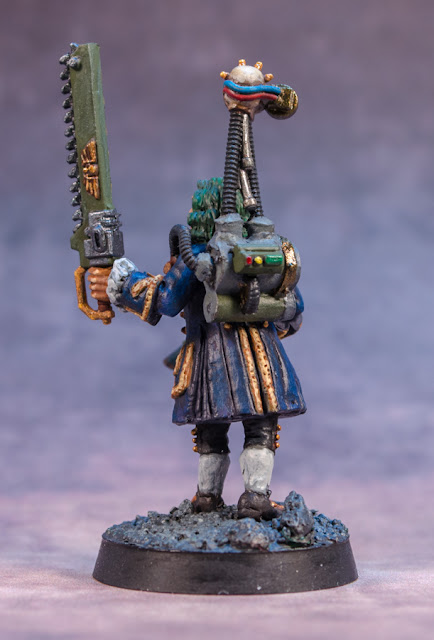 In addition to being happy with how he turned out I am really happy at how the photos turned out. I used all of my gear and knowledge from the photography course I took and processed the images in Lightroom. I'm really proud of them.

Here is the back story and stats for him that I'm posting in the Album in The Emporium of Rogue Dreams. Be sure to check out the others and see whose Rick Priestly picks as the ultimate Rogue Trader.


Abdul Goldberg! The name conjures up fear and loathing. No one knows the true origin of this Rogue Trader, he has been seen in many systems, never with the same crew. There are many stories about Abdul, this is one.

Before arriving at the fringe of the Empire, Abdul was a very zealous inquisitor. He enforced the Emperor's will with a vengeance but carried a dark secret, he was a psyker. At first he was able to hide his budding power. His power was revealed as he unleashed powerful wind blasts against the heretics who had killed his beloved acolyte, Brother Yorick. Abdul now travels with his loyal companion forever at his side as a servo skull.

Although Abdul is equipped with a full compliment of weapons, he is most often seen with his trusty bolt pistol “Fatima” and his Chain Sword “Te Absolvo”.

In game Abdul has the following stats and equipment:

Finally had a moment to take and edit a couple of pictures of what I'm working on. And on a Saturday no less!?

Five of the Boar Boyz that Don sent me. The other five have had some paint applied but I'm trying to figure out the sweet spot for keeping the ball rolling on them. I've seemed to have a hard time getting myself to sit at the paint table lately.

You'll see that my entry into the Abdul Goldberg contest on the Emporium of Rogue Dreams is coming along. I have until the end of the month to finish him. I'm fired up because they have just revealed that Rick Priestly will be the judge. I'm as giddy as a schoolgirl. 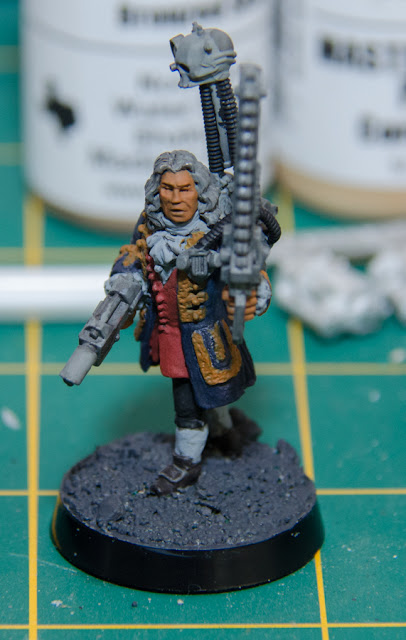 My Abdul is mostly Eureka's Voltaire with a few bits from the Cadian box added and a back pack and respirator cable/tube from Dragon Forge. Be sure to check out the other entries in the Album.

Hopefully I can get more done on this guy today.
Posted by Sean at 11:17 AM 14 comments:

Oldhammer in the New World T-shirt

Just trying to let people know about the Oldhammer in the New World T-shirt I'm printing up for us. 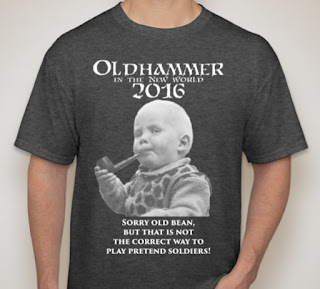 I'm in the process of taking #'s and sizes. You don't have to be a member of the facebook group, but I would encourage you to look on there once in awhile. You could also look at "the" Oldhammer in the New World blog or one of the other blogs by people active in the North American scene.

The price of the shirts is coming down as we order more. I think were poised to get another price break, bring them to under $8 per shirt. I am only attempt to cover my costs for printing and shipping these out. So I have a ballpark estimate of $2.50 for postage anywhere in the US, I might tack on 10 or 20 cents for labels etc when I figure that out. You can also opt to pick it up at the event in October. It may not be free, but it will defray the postage cost I think.

Sorry if it seems a little byzantine. I don't do this stuff for a living. You can contact me on Facebook or find my gmail in my profile if yo want to order some. I'm trying to finalize things by the end of the week.

I'll probably handle all payments through PayPal, I'll let you know what that address is when you contact me. It's not my gmail.

Oldahmmer Day USA will be Oct 1-2 at Huzzah Hobbies in Ashburn, VA and here's the Facebook event page.

Forgot to say thanks to Editor Mike of The Wargames Website for allowing me to use their "Old Bean" meme. It definitely fits the core group from last years event. I couldn't find the original provenance of the image of the boy, but it's made the rounds on the internet since 2010.

I'll be posting the event on their site soon.

How to embed the Oldhammer Opponent Finder on your blog.

Since I had a question about how to embed the opponent finder on one's own blog, I made a little video.


I decided to have this one unlisted as the last video I put on youtube was not very well received, and it hurt my feelings. ;)

Anyway, I edited it down so that it's not quite as rambling. Hopefully you will find it instructive. If you already know how to do this you don't need to watch it and tell me how I did it wrong. :)

I'll try to summarize the steps in case the video doesn't make sense.


So hope that works out for you, and that you can bring more friends into the fold.

What's wrong with The Oldhammer Cummunity and Oldhammer Trading Company on Facebook.

I've been a member of both of these communities for awhile now and have been increasingly annoyed by how things are handled in addition to an apparent lack of relevance to my hobby needs.

The Oldhammer Community, perhaps because of it's size, has become a major bitchfest. I've done my best to just ignore the posts I find irritating and focus on the aspects I like, but I'm beginning to feel like it's not worth it. Rules seem to be arbitrarily enforced and appear to be targeting U.S. members for harsh penalties for "infractions". If it really is just a club for people who live within driving distance of Nottingham, then just say so. I can get shitty, underexposed, blurry pictures of minis elsewhere on the internet. Also, if moderating the group just gets your knickers in a bunch, stop doing it.

The Oldhammer Trading Company also serves little to no purpose for me. Due to the time difference I miss many of the offers and International shipping being what it is the cost is becoming not worth it, if sellers even will ship overseas. Also people tend to constantly ask for ID's and valuation instead of apparently doing any research. So it has me asking, what value does this group offer me?

That being said, I am a member of several Facebook Oldhammer groups that I really enjoy.

Oldhammer in the New World

The Bazaar of Crooked Wonders

The Emporium of Rogue Dreams

All places with no drama, clear and fair enforcement of rules and just zero asshattery.

I unfollowed The Oldhammer Trading Company yesterday, but I'm trying to decide if I should just completely quit both groups. The amount that they annoy me is far outweighing the positives.

I'm sure many will respond "don't let the door hit you in the ass on your way out", and perhaps rightfully so. I just had to vent on this issue because it's been bothering me for awhile.
Posted by Sean at 8:34 AM 23 comments:

So you've listed yourself on the Oldhammmer Opponent Finder...

Entered another person onto the N. America list and I thought it was time to do a follow up post. Like some of you, I missed the early adoption of the opponent finder. After asking around a little I got it re-instated but I think some of the same issues that caused it to fall into disuse still apply.

People who are already geographically close to one another or in a group that meets semi regularly don't feel the need to reach out to others. While my attempts have gotten some people to become more interested/ active it hasn't seen my invitations to play increase.

I still think knowing roughly where in the world people are is useful, but it is not the be all end all. It still requires effort on one's own part. You need to actively search out people on the interwebs, be it the forum, facebook or google and you need to be willing (at least in principle) to travel to play.

I'm not saying you have to be insane like Airborne and myself and give up hours to travel but just be willing to accept the fact that people are not necessarily going to be falling over themselves to drive/fly to your town to play with you.

So here's what I'm asking you to do. If you blog or have a website, social media etc. mention the opponent finder. If you're on facebook join a regional group. type Oldhammer in the search and hit the group tabs. I recently learned there is an Oldhammer New England group for instance. Finally, make a group if there isn't one. Right now I'm trying to decide if I should do a Desert Southwest one or  West of the Rockies one?

Good luck with your hobby endeavors!

Finally did my battle and report for Talomir Tales. You can read mine here and Ed's there. 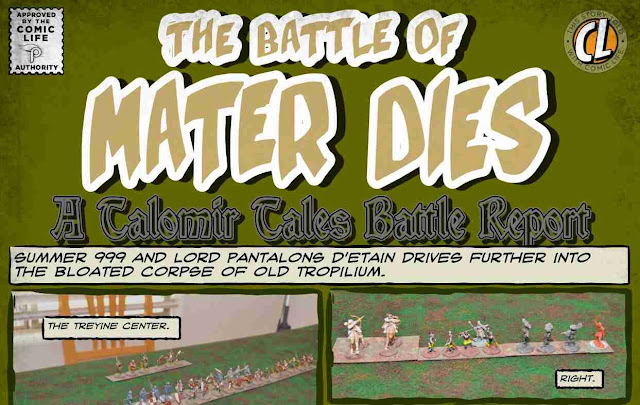 I used the latest update of Comic Life 3 and the Zombies template. I did have one crash, but didn't lose too much work. I can't stress enough, save early and often when using this program.

One of the things I need to do is finish off many of my 1/72 (20mm) figures. Too many are unpainted or half done. I also am still finding it difficult to get the photos I want. Right now it's a case of too much knowledge leading to frustration. I should be able to get well lit, sharp photos but I don't set myself up for success.

I'd also like to welcome Arjen. He appears to have a youtube channel which I'll let you discover in his friend connect profile. Arjen will be coming to the US soon and is on the opponent finder now. Hopefully he can find some people to get in games with locally and also come to the next Oldhammer USA event.

That's all for now. I've got to go to the gym and get back in time so we can do Mother's Day stuff. Call and/or kiss your mother.
Posted by Sean at 7:23 AM No comments:

Found out last night it was May-tallica!


His channel is here.

Sorry for the lack of updates. Various things wrapping up and home repairs have had me shifting junk around, burying and unburying my hobby stuff and generally randomizing things to the point of making the simplest of tasks a major project.

Stuff that needs to get done (still):


So a somewhat focused list. It doesn't even address the stuff I'm doing for helping to organize Oldhammer USA weekend. But I don't need to bore you with that.

I'll try not to freak out or implode. Probably good I had my last cup of coffee for the morning.

Here's to staying on top of projects.
Posted by Sean at 8:41 AM 4 comments: