It's been awhile since the last This Week In Talomir post and I've decided that this one must be #7. Never mind that there are 24 posts with the Talomir tag. I've posted the latest battle report over at Talomir Tales here. The title "Ager Dedecus" is my google translate attempt to get the Latin for Field of Disgrace. You might be able to get the gist of how it went for the forces of Tropilium from the title.

Ruarigh has informed me that the war continues, so I'll need to fight the battle with a dwindling Tropilium army. (Spoiler alert) I need to come up with a new name for a Tropilium general as Manlius Gluteus Maximus has been forced to take his own life so as to spare his family further humiliation and forfeiture of wealth to the Emperor. If you have any suggestions I'd love to hear them. I could just use the Roman tri nomina generator that I posted awhile back here. I had forgotten about my free google website completely. Looks like it may be time for a freshen up.

In looking for more Roman names I found a couple of good ideas. Ted's Roman Name Generator is pretty decent, but it is one that works off of an input name, and also not very silly. My name returns Aulus Vergilius Servilianus. Not bad. Paizo had some good ones on this thread and so I may look to Asterix for some good names and I can see from links here and here that there are some promising ones.

Back to the battle, the game was pretty good but was really over in about 3 maybe four turns. I played out an attempted retreat that took the game to 7 turns but the writing was on the wall. I may need to investigate a mechanism for calling the battle, just so as not to slog them out when that is really not all that fun. I have had a few battles down to the last man, but those should be rare. I'll definitely ask on the THW forum but perhaps you all have some thoughts on how a game should end. Realizing that I am playing these solo. Honestly I don't fret about things too much, but perhaps there is a rational way to come to terms when the battle is really decided except for the end game.

Highlights of the battle? Fladnag exploding in a ball of green fire as he attempted to cast a defensive spell. The Stygustan infantry going toe to toe with better armored foes and standing up to them. The ballista driving off one chariot with a precise shot. The Drums of Doom really did doom the Tropilium army with a -1 to reaction tests which was especially bad after the Amulet of Sorbrowane went out of action with Fladnag.

Low lights? Every spell was randomly a defense spell. The fact that the Axemen repeatedly failed a maneuver test after having a spell cast on them, there by losing activation and the spell effect.

A word about the figures. The Stygustani are all Egyptians from Caesar sets H47, H24 with four Nubians from H49 to help fill out the ranks of bowmen. The Priest(ess) is from the Caesar Fantasy Adventurers set F104. For Tropilium it was Italeri sets 6021 and 6028 with Zvezda 8052 thrown in. The Ballista was from HaT Greek Catapult 8184 and the Mercenary Skirmishing cavalry were Strelets Turcopoles 090. Fladnag is also from the Caesar Fantasy Adventurers set. 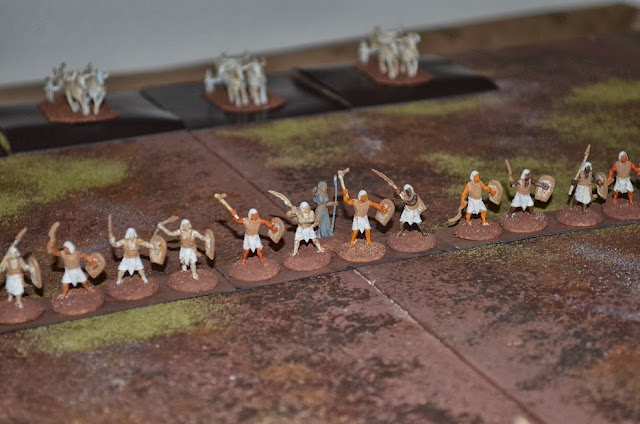 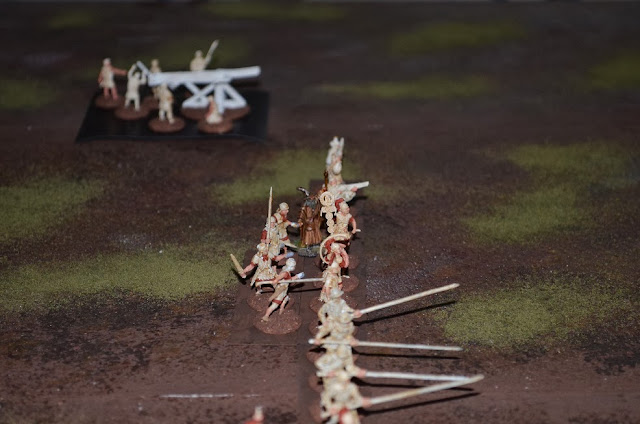 I thought that the Magnetic sheeting painted brown worked pretty well. I will add random blotches of earth and green and may experiment with a little flock. The 8.5 x 11 sheet that I used was thicker  and remained curved while the business card and 4 x 6 that I cut stayed flat. The only in game issue was the sheeting snagging on some of the sand I had put down on the terrain boards. I had been warned about that.

And welcome to Robin Sutton of Wargaming NZ and two other blogs I am less familiar with. He has some great 1/72 stuff and has been playing a lot of Spearhead and now Great War Spearhead.

There was another person to bring the followers up to 128, but I can't for the life of me tell who.

And a correction for Snickit's Tail.
Posted by Sean at 4:01 PM