Things have been busy and hectic, so hobby has taken a little bit of a back seat of late. But nerdery knows no bounds, so I started trying to figure out why my old Crosman 1077  (you can also get it from Amazon, here) wouldn't hold a CO2 charge.

While not really into gun culture, I am an American male of a certain age and I enjoy plinking beer cans and shooting the occasional varmint.

After wasting several 12 gram cylinders I decided to try and find out if it was possible to to fix this rifle that I think I bought in 1993.

So I found the manual and the parts list and watched a few videos.

I tried the Pellgunoil hack. It didn't work. Before I could try using teflon tape my brother saw the crack in the end seal. (Part #  38-128)

So a quick search revealed that EBay was my best bet for parts if I didn't want to wait a month. I got the parts from here.

The last thing I needed was a half inch wide standard screwdriver to open up the Guide Collar (Part # 338-041) from the Piercing Plug (Part # 1077A018). I ordered that from Amazon here. In one video a guy just ground the point off of a 1/2" spade bit. But I'd rather just have the tool. 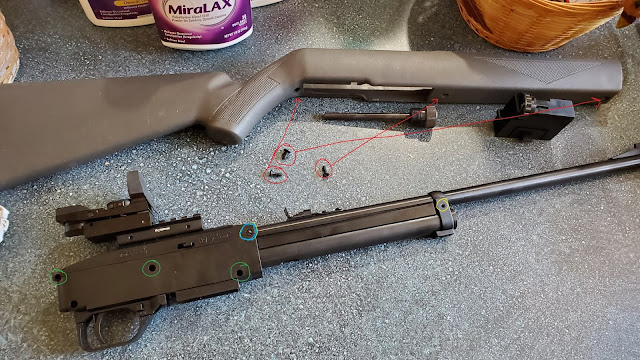 The stock easily comes off with the three phillips (circled in red) head screwdriver. Note that the one towards the front is larger. 2mm hex screw (circled in yellow) that holds the CO2 tube to the barrel. The four screws that hold the body (reciever?) are 3 phillips (Green) and one Standard (Blue), although I had to use a standard head driver to get the last green one out. Top tip, take the scope rail off first. It holds the two halves of the gun together if you don't. 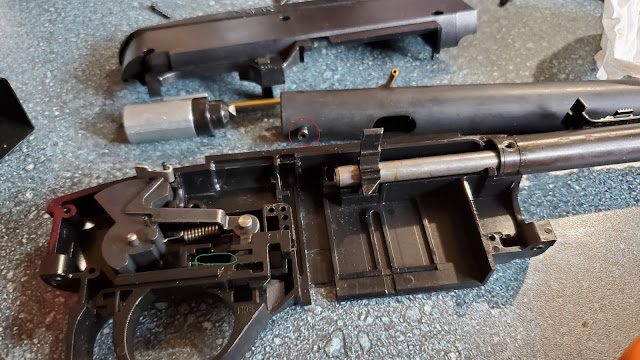 If you push the trigger down sideways you're not supposed to have the trigger spring pop out. I failed (Green Circle). The  Tube Pin (Part # 1077-031 circled red) holds the Piercing Plug in place. Just lock some vice grips on it and twist and pull. 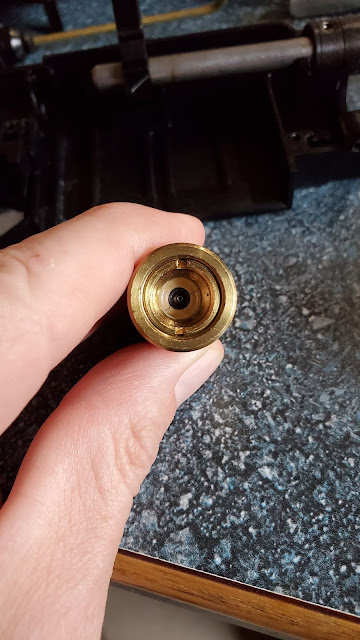 And now you have the plug out and can really see the crack in the End Seal. The slot in the Guide Collar is about 2mm and of course my 1/2" screwdriver blade is about 2.3mm thick, so I ended up having to grind it down anyway. 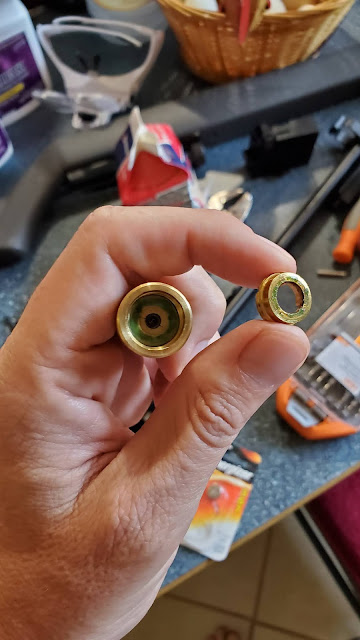 I'll try to take better pictures of how it all goes together when I button it back up.