As usual I am running around like a chicken with its head cut off. I thought I was in a space between Cross Country and Track Seasons and could get my hobby together. Turns out I got myself elected to the Band Booster Board, say that five times fast, and am more or less designated photographer for the band moving forward.

I attended my first HS basketball game this week and it was pretty good. I forgot how fun it can be to watch a game played by athletes who know what they are doing. I've been watching too many years of really horrible elementary school lunch recess basketball.

Anyway, I just wanted to share with you a few pictures of a game we played of the 2014 reboot of Dungeon put out by Wizards of the Coast. We had had the game for years, but apparently had never opened the box.

The art is nicely updated and some of the tokens have been streamlined. For instance you now have a token to show whether your magic sword is +1 or +2.

They also updated the classes to be more in line with current D&D. You now have Rogue, Cleric, Fighter and Wizard. No more Elf as a class. They have also provided male and female playing pieces for each class. I thought it was a nice touch. 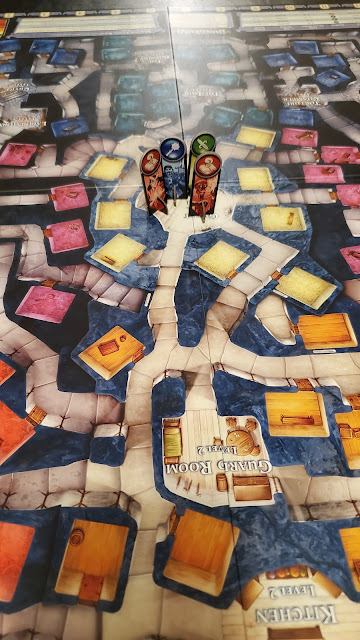 My wife chose to play the Rogue. I took Cleric, and the kids both wanted to be a Wizard. In the new game mechanic you roll to determine how many spells you start out with and then you pick cards for the spells you want. There are enough for two Wizards, it turns out. There is also a mechanic for replenishing d6 spells if the Wizard goes back to start. 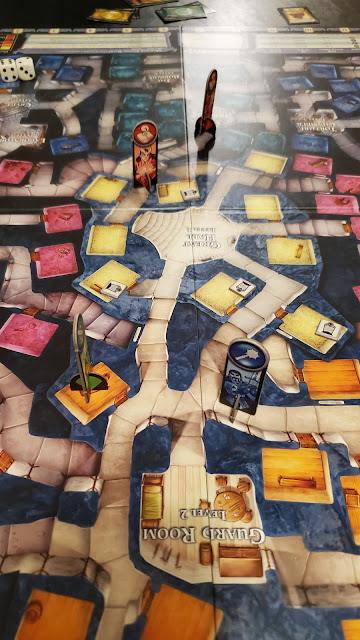 We actually read the rules for once and more or less followed the suggested levels to go to for each class. The two Wizards went the same direction because they both need the big money. 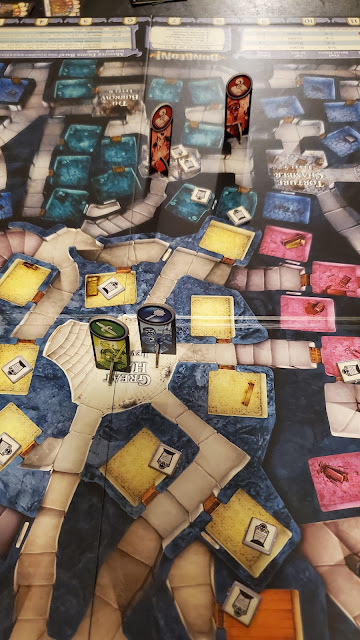 The Wizards got bogged down in the 6th level. There was a Red Dragon in that chamber leading to most of the rooms. That is my wife in the Great Hall having to respawn after being killed while I win the game after plundering half of the 2nd and 3rd levels while making a daring escape back to the Great Hall through the 4th level.

All in all the game still holds up. It's frustrating, but fun.

Hope you are getting in games with friends and family.

Email ThisBlogThis!Share to TwitterShare to FacebookShare to Pinterest
Labels: boardgame, Dungeon, wizards of the coast