I'm still plugging away at the Formigny figs, but we had an opportunity to have a family game night with my daughter home for Thanksgiving.

The ladies of the house chose Junta from the selections on offer. It is definitely a product of its time, 1985 and is in the genre of games that encourage you to lie, cheat and steal your way to victory.

The ultimate goal is simple, have the most money in your swiss bank account at the end of the game. I've only ever played this game with 4 players, but it can support up to 7 and there are rules for less than 4 but with a separate mechanism to accommodate not having enough players.

The roles available for the game are: President, draws the foreign aid and proposes the budget; Generals of the 1st, 2nd and 3rd Brigades each have their own troops and barracks in the city; Air Force Commander, controls the paratroops and has access to three airstrikes; Admiral, commands the marines and can call in gunboat bombardments; and the Minister of the Interior, controls the police, has a free assassination attempt per turn and can seize the chamber of deputies to force through the budget,

8 bills are drawn from the foreign aid deck each turn. Only the President knows the denominations they drew. The president then proposes how much they will distribute to the players and the budget is voted on. If it passes you get the money, if it fails the President keeps everything.

Players can start a coup if there is a coup excuse, like the Minister of the Interior seizing the chamber and ramming through the budget. 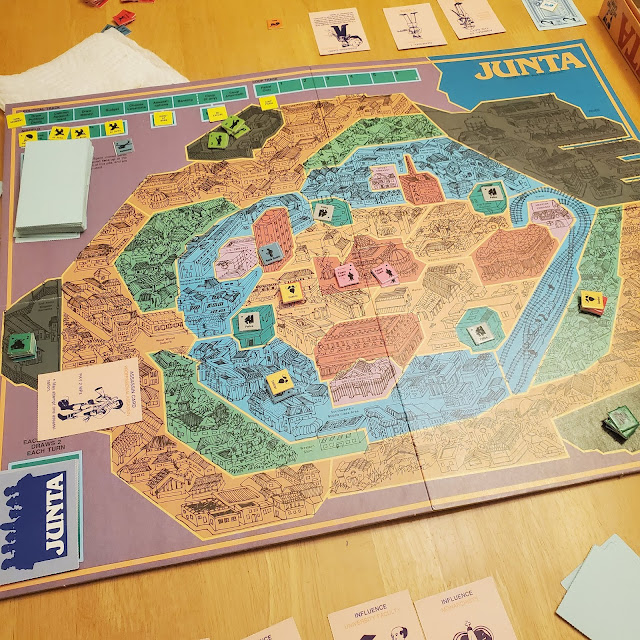 I believe the above picture is just after I had assassinated my daughter and taken all her money. In Junta you play a family, so you're never out of the game, you just lose cards and money in hand. My son (with the fancy beard control markers) has amassed a strange political between the Church and the Radicals. He has Christian Militia, Rioters and Student Protestors in the streets. 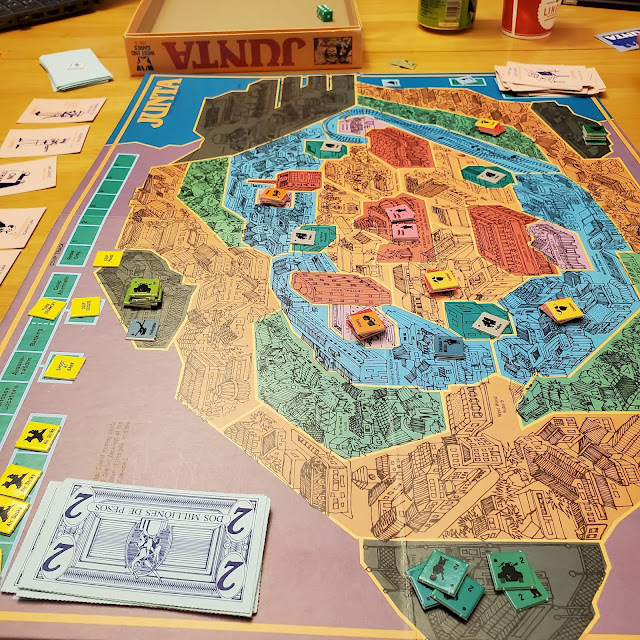 I'm not totally sure what all is going on here, but we had used up all the money. Bribes are placed face up on the bottom of the money stack. We called the game here. 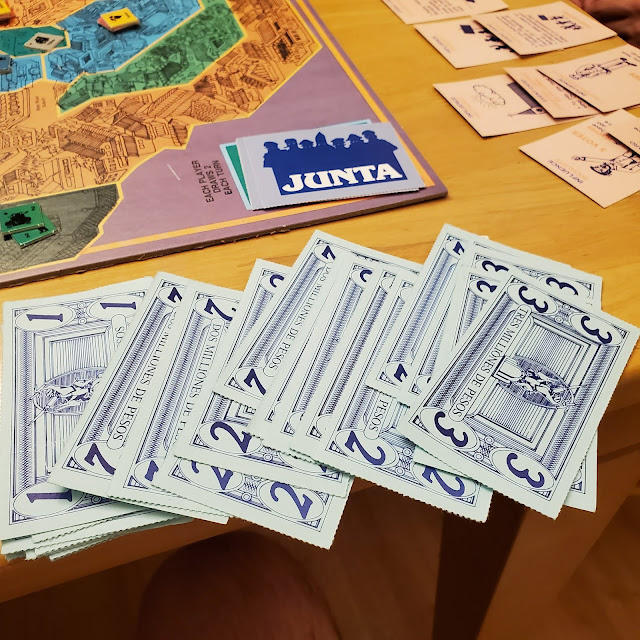 Here is my winning account with about 43 million Pesos in it. I was lucky in my assassination attempts and caught both my daughter and son with piles of cash in their hands. Each turn you pick one of five locations for your faction leader to be. Assassins have to guess correctly where the player is in order to have a chance at success. The Secret Police always succeed, but they can only show up at the bank on alternate turns.

Anyway it was a little diversion over the holidays. A silly game that plays a little dated, but if you like backstabbing games it's got a lot of that.