Back to the drawing board - Mighty Empires Campaign Map

Sorry for not posting regularly. Life and stuff. As is usual for me this time of year, I realize how lazy I've been the past year and get grouchy about all the projects I've let slip through my fingers. Both hobby and real life.

But anyway, this post is to tell you about the action I'm going to take to fix that.

That's right, I said it. Again. I've always had a thing for sweeping campaigns.Of course I've also had very scattered and grandiose ideas about them that ended up falling apart because I couldn't stay focused long enough to work it all out.

So you may recall the campaign I started with my gaming buddy from High School. I still hate the name, but he won the battle that got to pick it, so there it is. We set it up as a way to stay in touch after I went off to college and it ended up fizzling after a year or so. But I have two binders full of stuff for it and you may recall that I found a lot of the letters and paperwork from that campaign.

I have several maps of the campaign lets see where it all started. 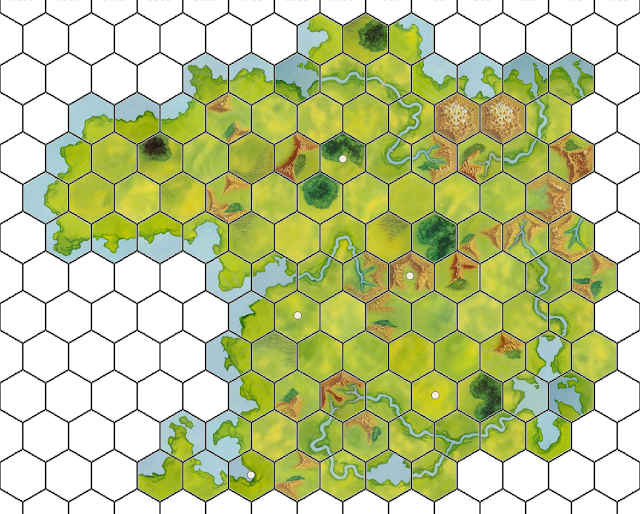 This one was reconstructed from my hand sketched map of our tile placement. I then scanned in my tiles and placed them into a hex grid in GIMP. It was a royal pain in the ass. 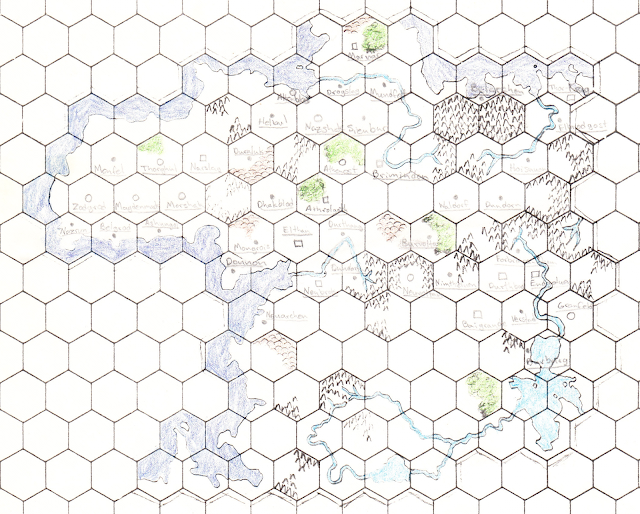 Here is the sketch version. I made many copies of this so we could show changes in territory easily. 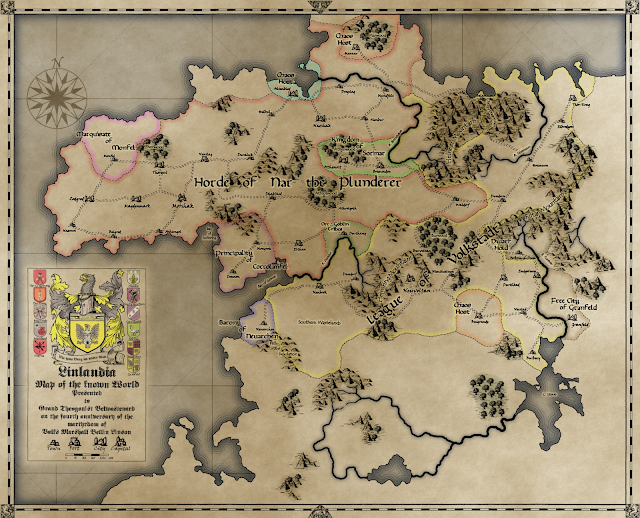 Lastly, here's the "fancy" hand drawn version I made as a present for my friend and to rekindle interest in the campaign. It didn't really work. But it was fun to make.

I hear you saying "I see what you've done in the past, what are you going to do to actually get this project moving?"

Welsh Piper is one of those sites I've found and forgotten about multiple times. It has great resources for hex mapping and a great program for calculating Fantasy populations. So I'm going to be printing out his hex templates and figuring how to scale my map into  his templates.

The main problem is what scale are the Mighty Empires tiles. In the original game the time scale is supposed to be one season, and banners move one hex. Years ago I read "The Logistics of Alexander's Army" (I think that was the title) and 10 miles a day march for an army seems stuck in my brain. I think I fudged about a months worth of travelling in one season, so roughly 280 miles. I then dropped that to 250 to make it easier to divide by five, because that's how the Welsh Piper templates are set up. Of course the Welsh Piper mega hexes are 125 miles, so I will figure out if I want to just make my map scale 125 or translate my one hex into two in Welsh Piper.

The ultimate goal is to create this map in Hexographer, but I've found it difficult to get started or manage the aforementioned scaling issues so I'm going to do it by hand with colored pencils. Oldchool style.

I'm going to print out templates and copies of the maps and start hand drawing the new maps over the Christmas break. As I get going I'll fill you in on how it's progressing and ultimately how you can get involved if you want to participate in the ultimate battle of good versus evil.

Thanks to Airborne Grove of Give Em Lead for re-re-kindling the idea for this and Bulldog Lopez of  He of Three Names for reminding me that I can use headings in a post.
Posted by Sean at 7:12 AM