This was the epic battle we played on the Saturday. 10 hours but it didn't feel long like some 3rd ed games can. Lots of action all over the table. You may be able to read other accounts or the lead up to this battle on the other participants blogs. Give 'em Lead, Governor General of Sector Six, He of Three Names, Blue in VT.

On a technical note, I used my cell phone and then processed the photos in lightroom. To get the "comic" look I wanted I decided to use the photoshop Poster Edges filter and bumped the exposure as needed. Anywhere from 0.3 to 0.5 of a stop.

It was a little more work but I think it achieved the look I want without overpowering the figures. 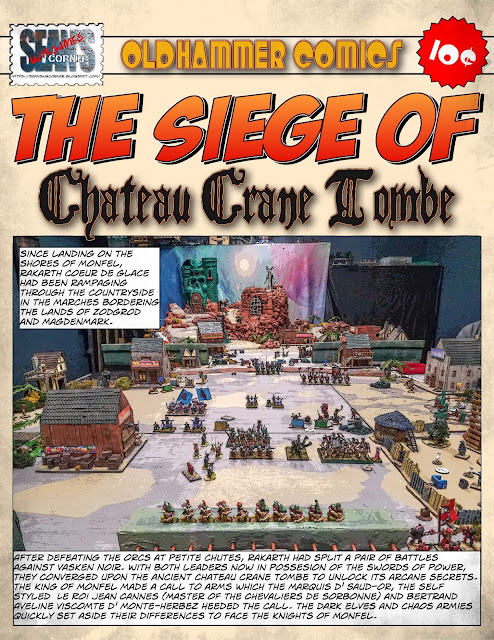 We have all decided to not be overly concerned with adhering to each others fluff. We try to use the appropriate character names to give credit but where it goes from there may be totally different. 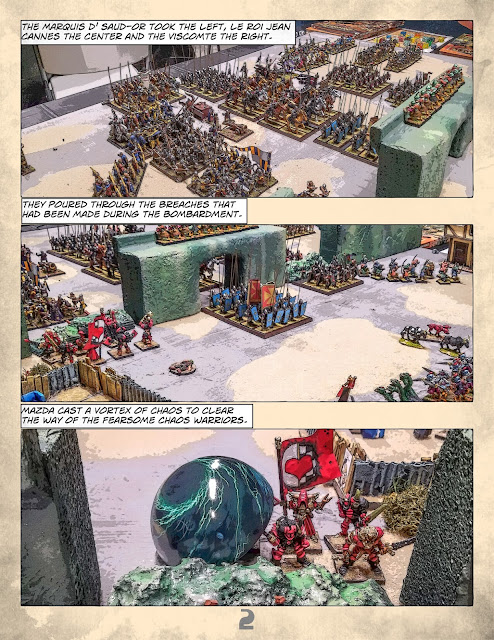 Airborne commented at the time that he hadn't anticipated Lopez setting up so far forward in the defense. We had a slog from the outset. 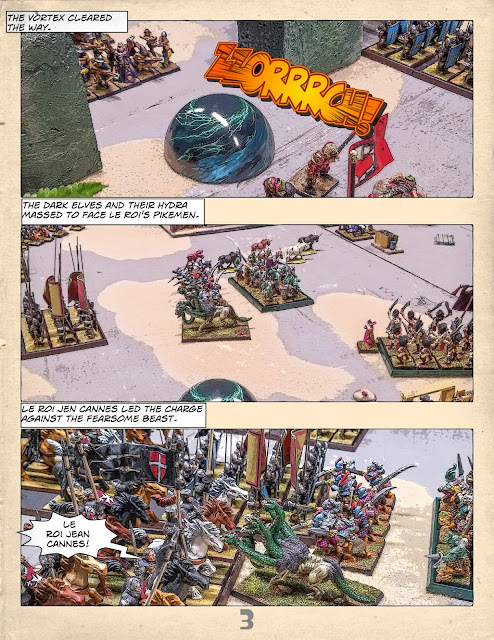 I rolled for spells during the set up Friday night. Mazda got some great spells, Holbon Toddlebrew ended up not having any that really made a difference in the battle. I was really ecstatic about getting Vortex of Chaos. 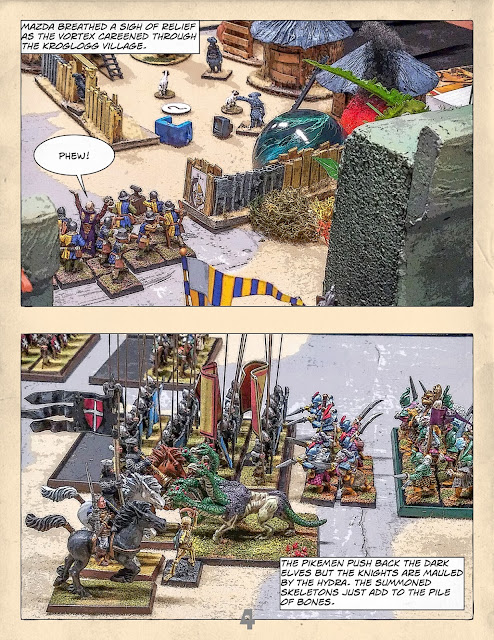 After casting it though I was terrified that it would randomly come back down my line of march or cut straight across our line of advance. 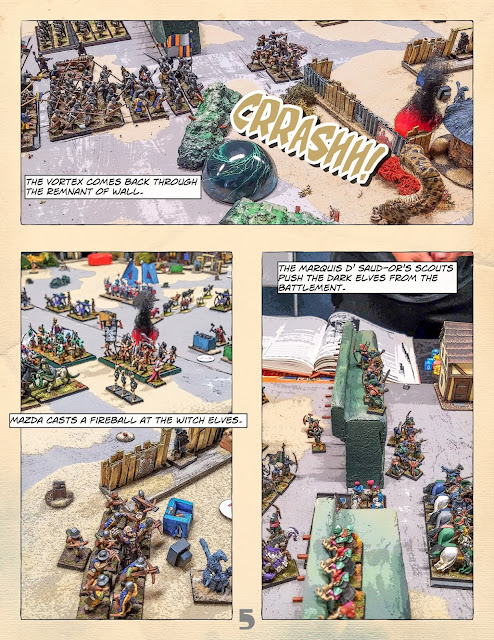 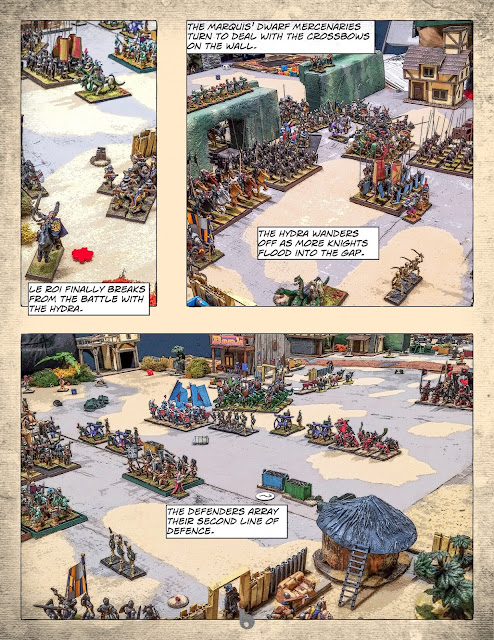 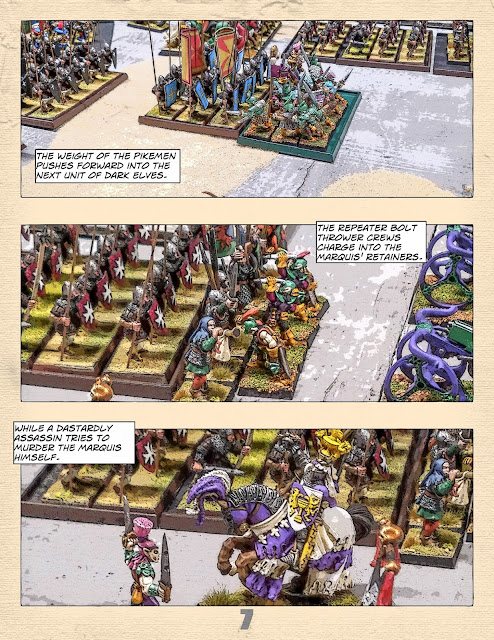 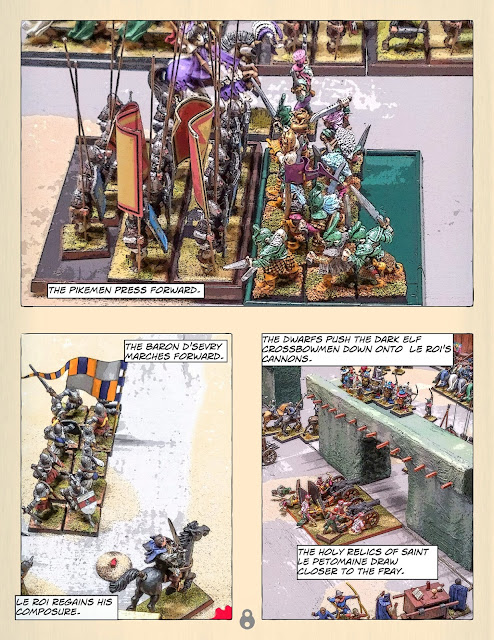 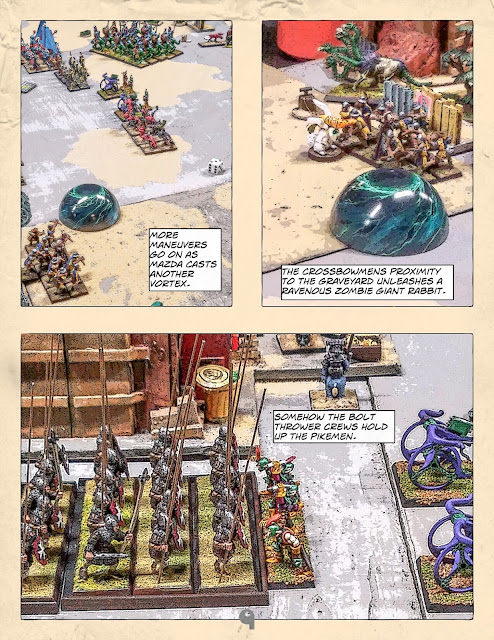 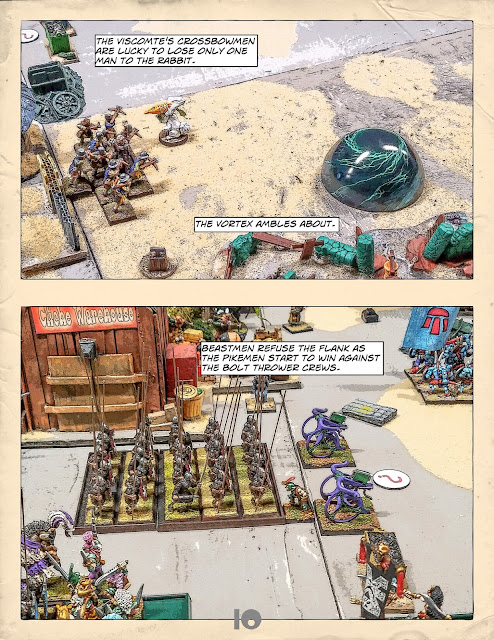 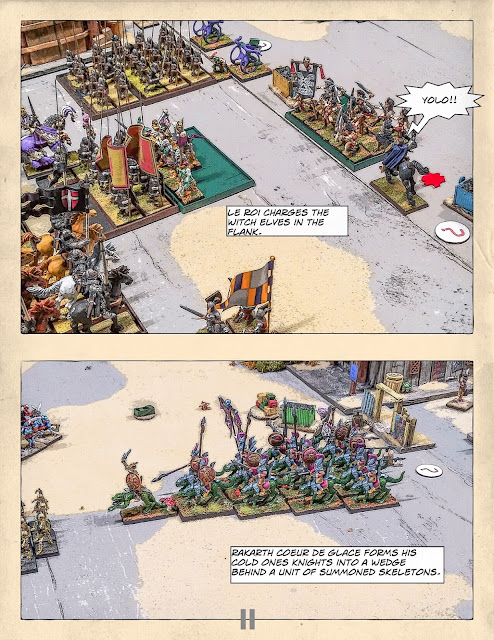 Airborne mentioned it on his blog. Lopez formed and reformed his Cold Ones every turn. It was kind of funny. 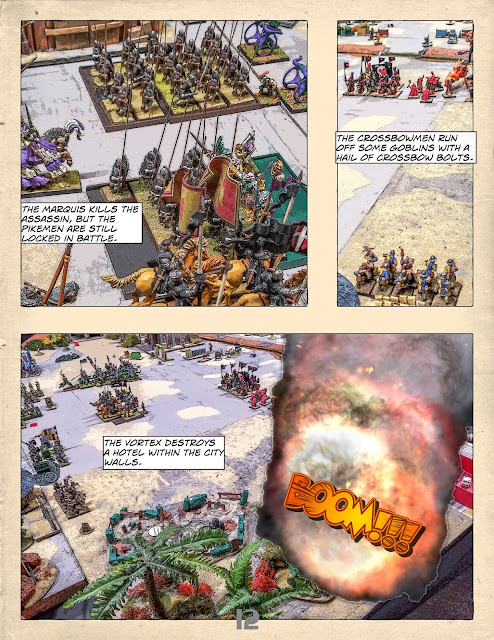 We were all sort of hoping that the Rabbit and Vortex would collide, resulting in an epic explosion. Instead they both wandered off. The Vortex did take out one of my objectives, I had to blow up three buildings. This was the only one I got. 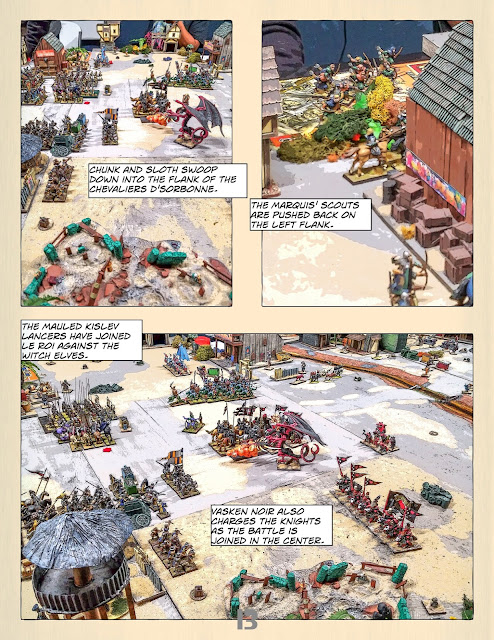 The Hydra was bad enough. This Dragon messed us up. My Foot Knights couldn't pass a fear test to charge the bugger. 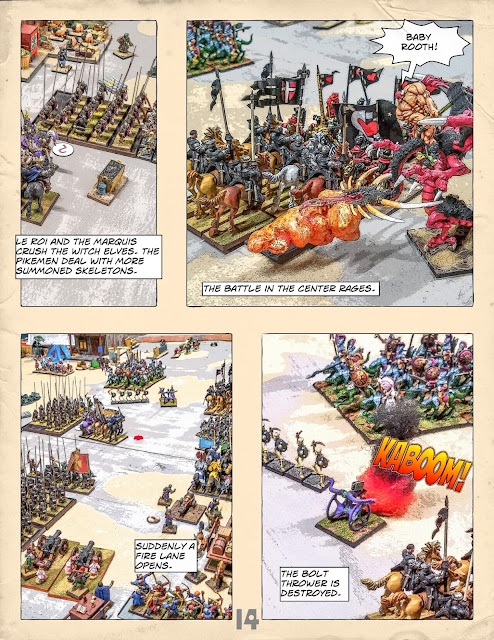 Panel 2 on page 14 is probably my favorite picture from the battle. 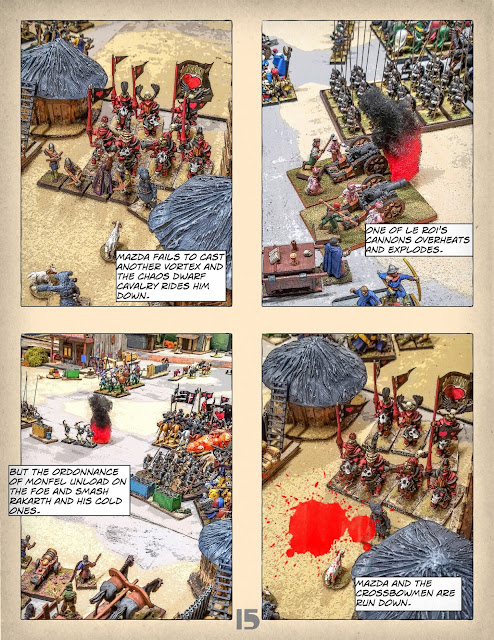 When the cannons finally had a clear shot it was glorious. If Maj. Guiscard's second cannon hadn't exploded we might have demolished the Cold Ones and Rakarth Iceheart. 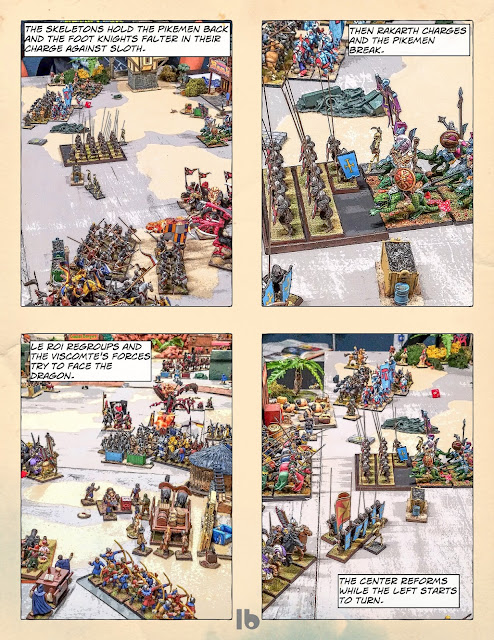 When the Cold Ones did finally get stuck in their fear attribute started a tide of routs that essentially ended the game. 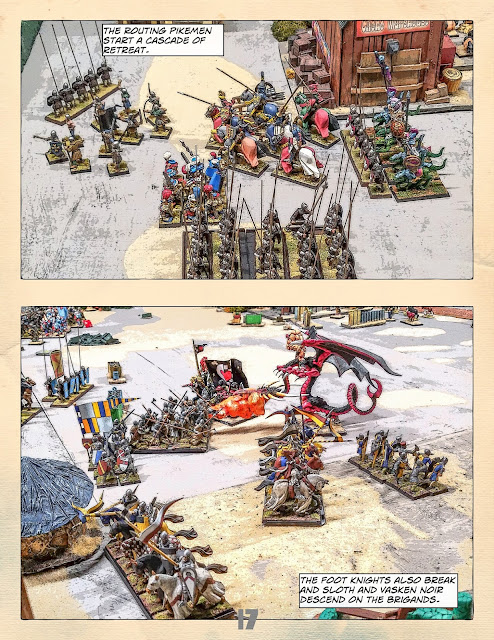 Same for the Dragon, Sloth. He started flying around and decimating my units as they tried to form up and actually get into the battle. 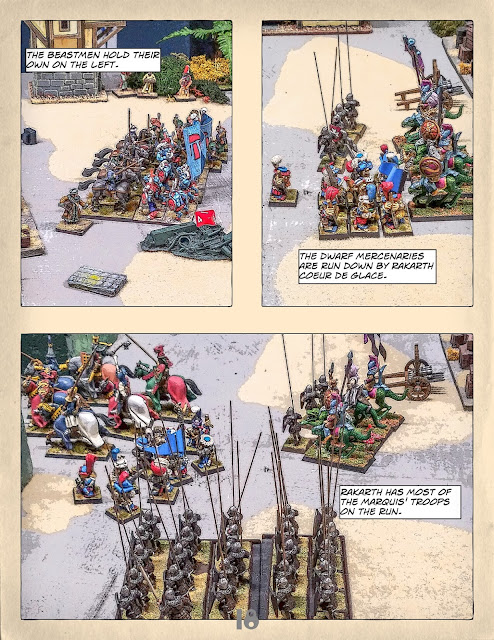 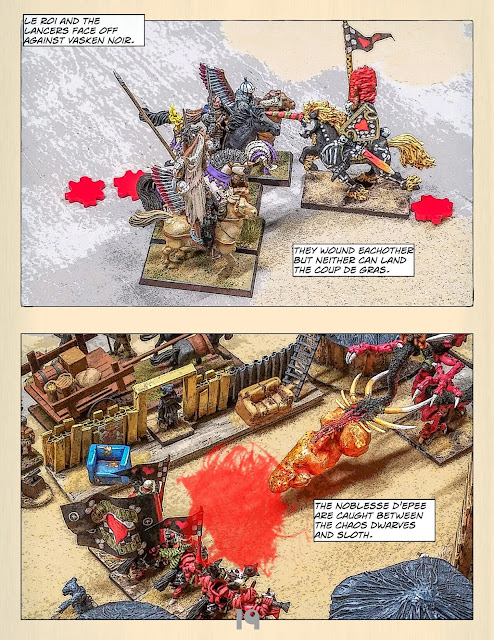 My +1 Elite Knight unit damaged the Dwarf Cavalry but then was destroyed when they got caught between them and the Dragon. I hadn't considered that the infantry would all evaporate and free up the Dragon like that. 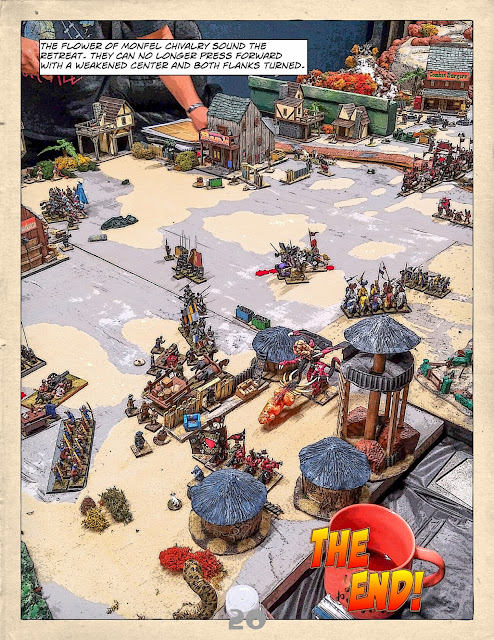 Although we still had a lot of units left our line was in a shambles and there were more chaos reinforcements arriving. So we shook hands and called it a game. It was fun and seemed achievable right up until the Cold Ones got on a roll. Fear is a very potent attribute. As usual I had a stratagem  that I left unused, but at the time I felt like I didn't have a good space to use my double move. I either didn't have room or would have left my units open to a charge.

Any way, tons of fun. I highly recommend getting together with  a group and just throwing down some armies and not worry about points too much.

Oh, and perhaps I should have said. My Bretonnians were the ones from the Old World Army Challenge. I'll be doing it again in 2019. Undead this time.

Thanks for looking and commenting.
Posted by Sean at 6:52 AM