I've been blogging for 8 years?

Well it's the blog's anniversary, bloggiversary if you will, and I had no idea that I've been writing this thing for 8 years now.

Seems like I should have more to show for it. Oh well.

So perhaps a trip down memory lane is in order:

My most viewed post was Post Apocalypse 28mm which was talking about a Ganesha Games release and some figures from Lead Adventure. Looks like I hot linked to the images (sorry) and they are now gone. I never ended up getting those figures. This post has 3376 views, probably because of the title. It's not a great post.

My most commented on post was Welcome Followers, with 7 comments. Early on I decided that I wanted to welcome my followers and try to respond back to all comments. Of course it looks like I forgot to respond back to most of the comments I got. Anyway, I like to try and make my blog like we are having a personal conversation. Just not too "personal", if that makes sense.

Most viewed was Another Post Apocalypse err.. Post. I was still blathering about post apocalyptic gaming, but not actually doing any. No clue if Apocalypticum became Mutants and Death Ray Guns.

Most commented upon was 10,000 hits prize draw. Makes sense, you had to comment to win something.

Most viewed was Sexy (Sexist) Miniatures debate, and it still gets hits occasionally. I think this is a "problem" that is never really going to go away. I also am probably showing my age with my likes and hangups, but there you have it.

Most commented upon was 2nd Bloggiversary Giveaway. Surprise, surprise, another giveaway. Coincidentally, I think Asslessman of Leadplague won the prize.

Most viewed was New Talomir Tales post and Welcome, the post itself is just a link to a report I did on Talomir Tales. Perhaps I cross posted it on TMP or something. I had a lot of fun playing in that campaign, although I did fall into the trap of never completely painting my forces.

Most viewed was To the Strongest, Dragon Rampant - News you can use. I have played neither of these rule sets and have misplaced Dragon Rampant almost as soon as I got it. I really want to play TtS. I need to just do it, as the kids say.

Most commented upon was 4th Bloggiversary for Sean's Wargames Corner, sigh, another giveaway. Although I do have some Oldhammer Orc Archers I finished posted up.

Most viewed was  Abdul Goldberg, the most infamous Rogue Trader. Thank God! This figure is probably the single most thing I am proud of since I got back into the hobby. I didn't win the competition, but Rick Priestly said nice things about my offering ans it was something that I had an idea for and was able to execute. Yay me!

Most commented upon was, wait for it, Obligatory Year End Post Pt.1 - Painted in 2016. I'm just as surprised as you that it was not another giveaway. It beat out the Abdul post by one comment. It's actually a pretty good post as it shows what I painted for the year. I didn't paint a lot, but I liked most of what I painted.

Most viewed was Shadow War: Armageddon - 3 Way Loot Battle, this was the year that my views ballooned, many posts in the thousands. I wonder if it was some kind of bot traffic? Anyway, putting the title of a rule set in your post title seems to get a lot of hits. It's also a good comic report.

Most viewed was Paint Table Saturday 219 - Chevaliers D'HHonneur metal blocked. Still on the weird uptick of views, over 3000, they would fall back to normal 100's later in the year. This post is pretty meh.

Most commented upon 1000 point-ish Bretonnian Army. I'm glad this one made the list because this was a big part of my 2018. I felt quite a sense of accomplishment getting this army finished. I then got to use it in a massive game here.

Most viewed is Banners by numbers - The tutorial no one asked for. A decent post, if I do say so myself.

Most commented upon is Amburger Hill a comic report of a game I had here in Phoenix where I had my ass handed to me. We have a game coming up here in a couple of weeks and I'm way behind the curve on getting my list together for that.

Anyway, thanks for looking. Although this blog is sort of a catchall for my random train of thought, it's the interaction with you all that makes it interesting. So thanks for putting up with my ramblings.

Is it time to be terrified yet?

I'm wrapping up the OWAC2 but also madly trying to prepare a bunch of figures for BOYL in August. My timeline is a few days shorter than until the actual event because I have so much travel time to get there. Something like an 11 hour flight, followed by a 2.5 hour drive. Ugh.

Any way, here's some stuff. (Sorry for the bad pictures.) 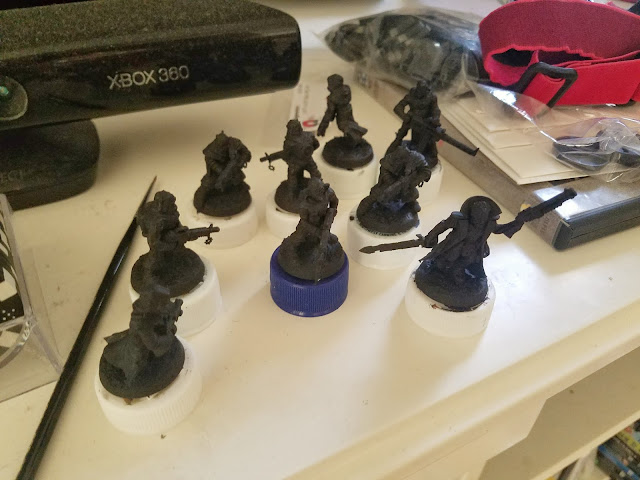 9 Humans. I realize now that they had the extra arms attribute. Whoops. I'll pretend they have baby T-Rex arms under their jackets. I also really need to dust. 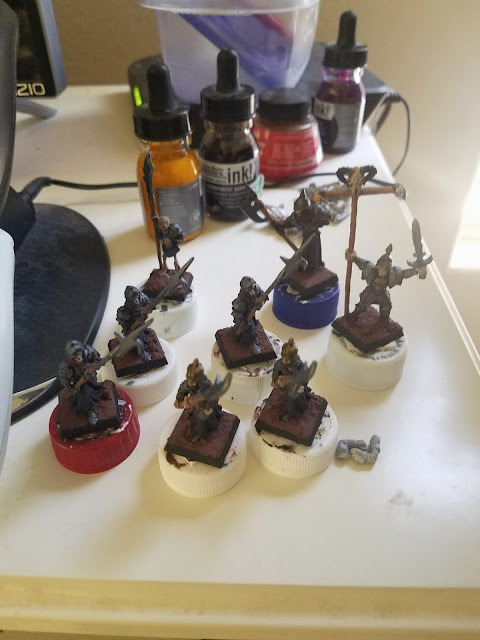 The grave guard, or whatever, that I'm using as Grim Reapers for OWAC2. 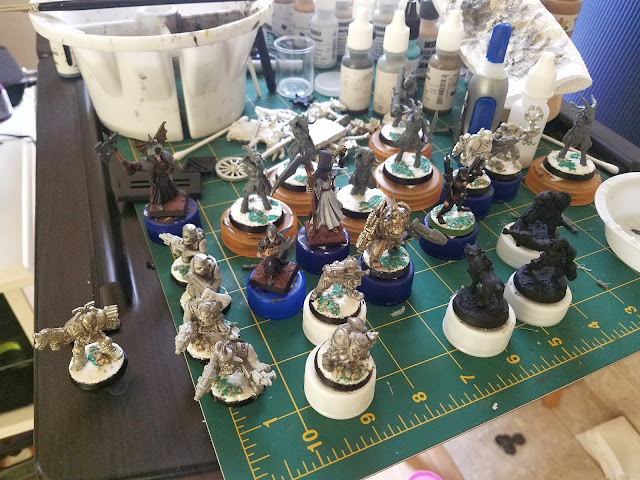 The Renegade, Orks (Extra Joints), Beastmen (Irrational Fear [color]), Assassin (I like the way he came painted, just trying to fix him and texture his base.) Two candidates for the Terminator Game/ Strontium Dogs if I can weasel my way in. And some skellies mixed in. Also the Zombie plague cart that needs to be built. Not shown are the Ash Waste Racer, Great Gargant and Space Marine Terminators that have yet to be built. Right now I'm also thinking I will assemble my adventurers for the Temple of Rigg from already painted Fantasy stuff.

Sorry for not posting in awhile, life has a way of getting in the way of hobby stuff. I've been meaning to share this list of youtube videos from our WFRP campaign. Michal has given me permission to post them here and I will set up a page to post the links for easy reference. I joined the group somewhere towards the end of the "Heralds of Woe" campaign. I'm not sure which session yet. The sessions are about 3 hours each. I've toyed with the idea of stripping the audio and editing them down to 1 hour chunks for a podcast format. But honestly I don't know if I have the stamina for that.

Thanks for looking and tell me about your gaming if you're doing some.
Posted by Sean at 11:02 AM 4 comments: