Combining my love of Obstacle racing and Zombies

I just got email notification of this race in San Diego. 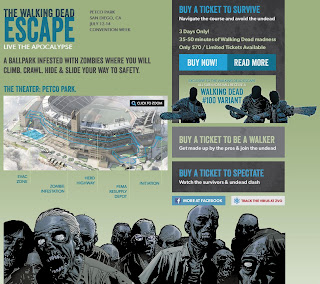 It looks like you can try to race it or volunteer to be made up as a zombie and harass contestants. I wasn't going to race anymore until the fall, but I am sorely tempted.

Oops! I also forgot to welcome Shelldrake. His friend connect doesn't mention it but he has a couple of blogs. The one I like the most is his Play By Blog (PBB) one Shelldrake's Zombie Wargame Blog.

Email ThisBlogThis!Share to TwitterShare to FacebookShare to Pinterest
Labels: Zombies

Following in the footsteps of Shelldrake  I took the gamequitsu zombie quiz and got this result. Longer than I'd thought. I'll have to test it out in a game of All Things Zombie.
Posted by Sean at 6:37 PM 3 comments:

Games that define us.


Well, a day late as usual. But I thought that this was an interesting one to try. So, here goes.

1.Risk:
I played many, many games of this over the years, quite a few solo when I had mono in the 6th grade. I still love this game, but can't get my family to play it. I bought Lord of The Rings Risk when it came out and am tempted to buy Risk Legacy

2. Advanced Dungeons and Dragons:
What else can I say. Started playing this around 12 or 13. I had seen the basic boxed set when I was 10 but did not understand it at all. Played all through high school but drifted away as the group went their separate ways to college etc. I got a chance to play two games of Elder Sign today and it was fun but very tough. The first I played solo with one investigator at a time. I took some pictures, but of course I can't find the one cable I have for an upload.

Anyhow in the first game I drew our old friend Nyarlathotep, what are the odds? (They are 1/8 or 12.5%, but I digress.) I drew Ashcan Pete as my investigator. I'll spare you the details and just say that a combination of terrible dice rolls and forgetting special rules at key junctures led to Pete's demise. I then drew Harvey Walters and continued. Harvey's attribute of strong mind comes in very handy, allowing you to change a horror result to a scroll result, saves on nasty terror effects. It's of course hazy now but some miscalculation had me run out of stamina, perhaps it was a mythos card effect that I forgot to take into account. Suffice it to say, one investigator by themselves has a hard time making it.

Cue game two. My wife and daughter are off at some reward activity for selling a ton of Girl Scout cookies. So boys at home alone, my son wanted to play the game. He picked Monterey Jack and I shuffled the remaining deck and picked ... Ashcan Pete (^$#@^!). The ancient one was Yig. He takes only ten elder signs to seal, but has only eight spaces on his doom track, five of which are monsters.

We did pretty well, coming close to death a couple of times. My son got a little frustrated and bored when he wasn't rolling well and I had to finish the game for him, but he did pretty well for a six year old. We struggled a little bit with locked dice but also got an otherworld adventure card through a magic item. It took me quite a while to realize that we needed to be there to collect the Elder Signs to seal off Yig. I did have to take one mulligan for Monterey Jack, as I just wasn't paying attention and would have gotten him killed foolishly.

We started rolling hot and using the focus die a little bit more and got nine of the ten signs needed before the hammer dropped and Yig appeared. Among the many things I misread, we each needed a common item unique item and spell to not be devoured. Neither of us had any items. I also forgot to remove elder signs for each Cultist we killed, but i'm not sure if that came into play or not.

So great fun, but very hard. If any of you have played solo and have any tips, please let me know. JF on Solo Nexus has a review of Elder Sign that is good and I think fair. I totally agree that the fonts are way too small to read easily. You can find his review here.

Welcome to Matt, he has an interesting blog about desktop wallpapers. I think the cow is saying "nice udders".

I'll try and put up some pictures when I find that damn cable.

It's true, I have no shame. While we were out and about on Mother's Day I some how convinced my wife to let me take the kids to Barnes & Noble while she shopped for shoes.

So I came away with Conan: The Frost Giants Daughter I decided to buy the Conan title mainly because it was the only one available. The story so far is good but I don't care for the art as much as in the other two of the series I have. (Born on the Battlefield and Free Companions). The coloring seems washed out, the line drawing a bit messy/ sketchy and the inking also light. Perhaps I'm just ruined by the Roy Thomas et al works where everything was very crisp marvel drawing.

I haven't had a chance to play Elder Sign yet, but the rules are only twelve pages and it seems pretty straight forward. Seems like it will work well for solo play.

As an early birthday present I received a Kindle Fire. We are planning a trip to China this summer and my wife thought it would be nice for me to have it on the plane.

I spent some time agonizing about whether to get a Droid tablet or the Fire, but decided that since I do a fair amount of business with Amazon already it was worth it to buy the Kindle.

It's light, and fairly sturdy. I have a case cover for it and have so far dropped it once with no effects. The battery seems to last pretty long, a few hours at a go if watching video, a little longer if reading books or web surfing. Ease of downloading and installing apps, books etc. It is very easy to load things onto the kindle. Most of it is done through Amazon, but you can do it as an external drive. I have loaded all of my Two Hour Wargames titles and now have a way to bookmark where I am in each rule set easily. Watching movies on Netflix. I have taken to watching Netflix in bed with the headphones on. A 7" screen on the belly is about the same as a 42" screen across the room.

So far neither of the browsers work with blogger. Some of you may have received notifications of comments from me only to find no comment. It will let me comment on a blog, it shows up on the blog in the browser, but is never seen again. The included browser "Silk" is a little slow and most people seem to hate it. Dolphin HD and Maxthon are two recommended replacements. I've been using Maxthon now and it seems a little better than Silk. Of course when I tried to post this using it blogger said the browser was not supported and I could only type the title and not the body of the post. Which leads me to the last issue which is the App store. Why oh why does amazon limit the apps? The choices for things like browsers is really limited, Maxthon was the only available browser, for instance. I was also hoping to be able to buy Elder Sign: Omens for the Fire. No soap. You can apparently side load from another android device but get a glitch that messes with the clock turn making the game un-winnable.

So I think overall positive, just a few things that are annoying and perhaps would be issues with a Droid tablet as well.

So this leads me to what is the deal with blogger. I know it's free and all but there doesn't seem to be any way to address this browser support issue. If I could load chrome onto the fire I would. Why does google make all this stuff that doesn't integrate? Seems like it should.

Javier just posted this link on the THW yahoo group. Neat little video. I'm not 100% sure why they felt the need to blur out the miniature bases.

(Doh! The video won't show up in the blogger upload feature.)

Anyway, you should watch it. Nicely done.
Posted by Sean at 1:48 PM 2 comments:

Over at Chicago Skirmish Wargames they have been doing a lot of post apoc gaming. This post here is a report of the game they ran at Little Wars, straight out of the Road Warrior.

The cars look amazing and it looked like a fun game. Even better, they put up a link to the rules they are using here. I've downloaded them and they look pretty cool.

I'm still working on those ACW posts and am looking into a post about paper modelling. I have a bunch of things to do today for a Brownie meeting my wife and daughter are hosting here tonight and I just got a call from my Mom about a death in the family. So, as usual, it may take awhile to get these ideas posted.

And in other game related news, it looks like I might be joining a Play by Blog with my brother and his gaming group. So many projects, so little time.