Two days, two reports!? I must have a lot of time on my hands. I forgot to mention, all of my photos were taken on my cellphone this year.  The Space Hulk and Woodenstadt photos were edited on my phone using snap seed. The Mordheim, Necromunda and Axles & Alloys photos were all done on my computer using Light Room. Scrolling through photos on the phone to edit them was a pain. Perhaps organizing them into Albums first would be the way to go, but honestly file organization is much easier on the computer.

On to the report. 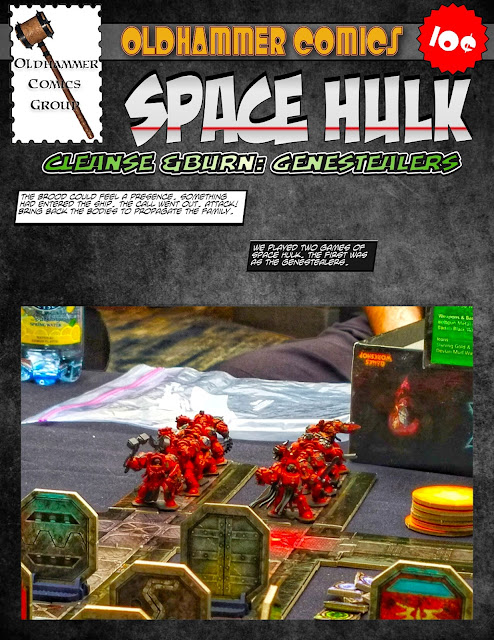 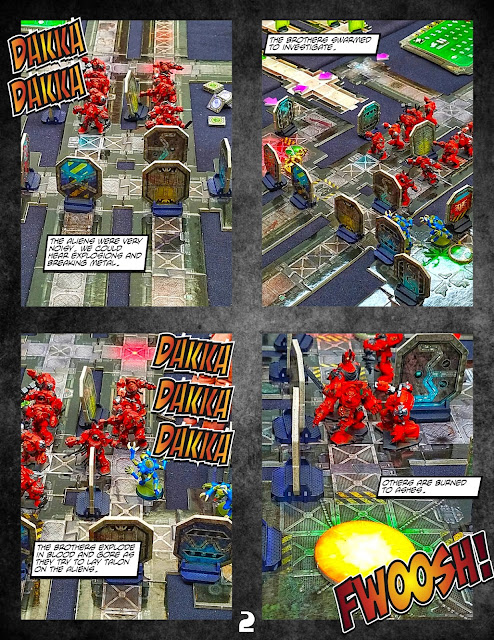 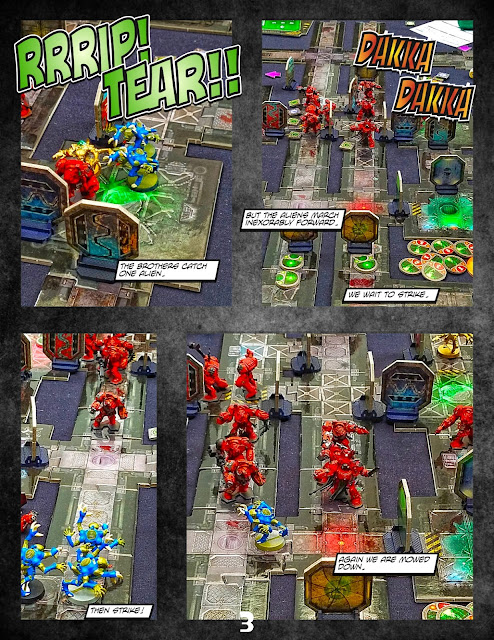 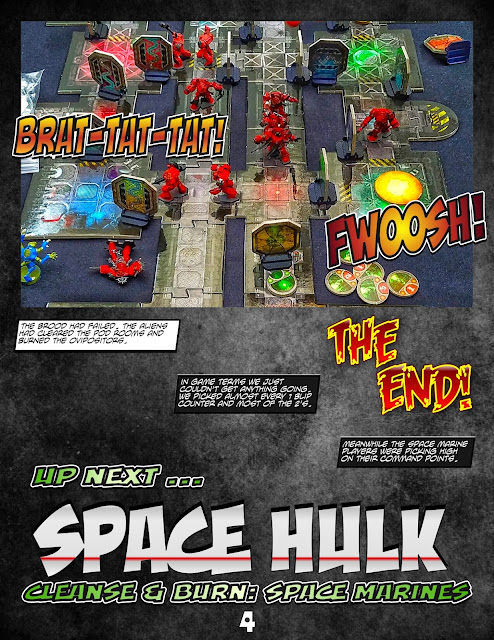 I'm experimenting with a more saturated style.  Let me know what you think. Thanks for looking.
Posted by Sean at 8:34 AM 5 comments:

Just thought I'd try to do a quick comic report on Kublacon to give you a taste of what caught my eye and the games we played.

Comic Life 3 was used but it didn't make it easy. An update to the software, crappy internet and a hard to use bluetooth travel keyboard have seen it take most of the day.

I know, Grove. I should revert to Comic Life 1. Anyway. 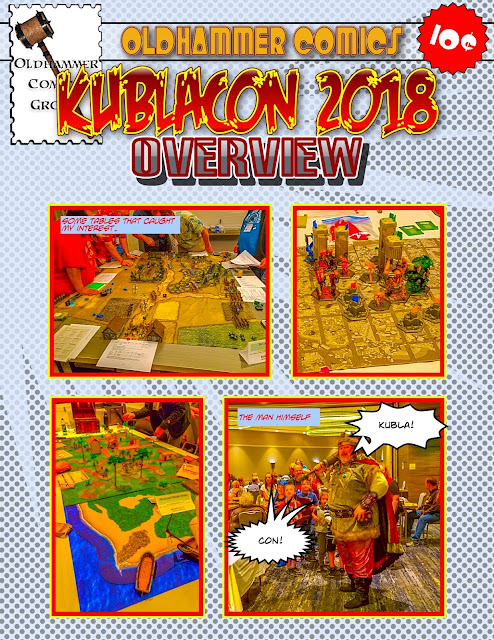 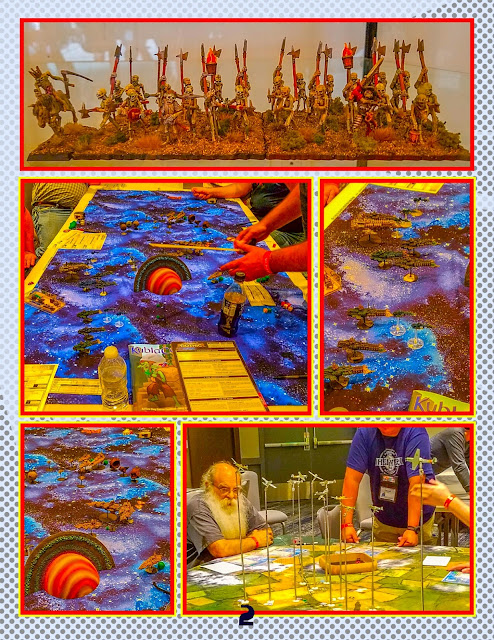 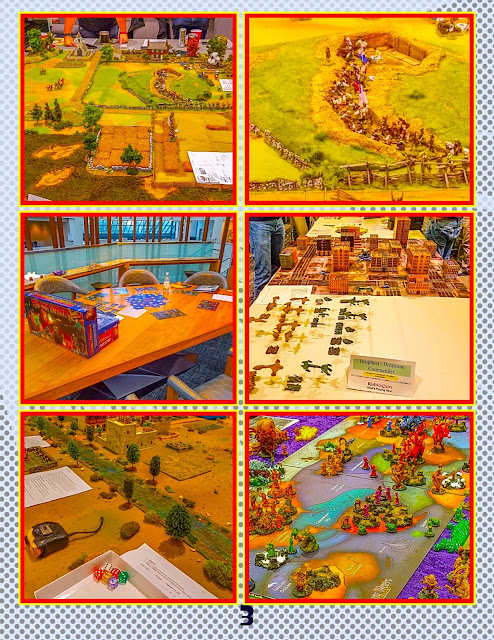 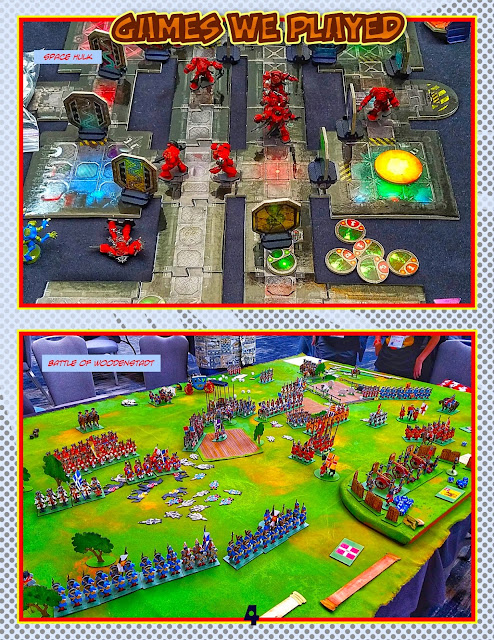 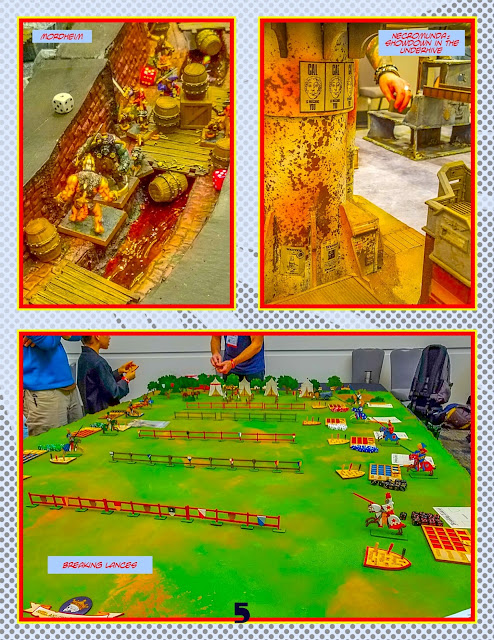 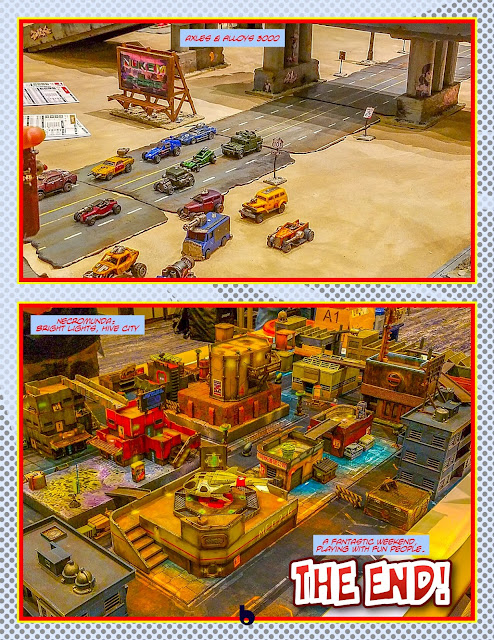 Thanks for looking.
Posted by Sean at 7:22 PM 9 comments:

So I finally finished those Bretonnians I was working on for the Old World Army Challenge. If the article isn't at the top of the page anymore, you can read it here. I suggest you go over there if you want a full break down of the points cost. When I gave actual points to the various bonus figures I painted it came out to more like 1200 points. I think I will make a list of about 1500 points as I think that is more playable.

Had some lighting issues, I probably should have pumped up the ISO more. Had to have the aperture wide open, so it's a little blurry in spots. 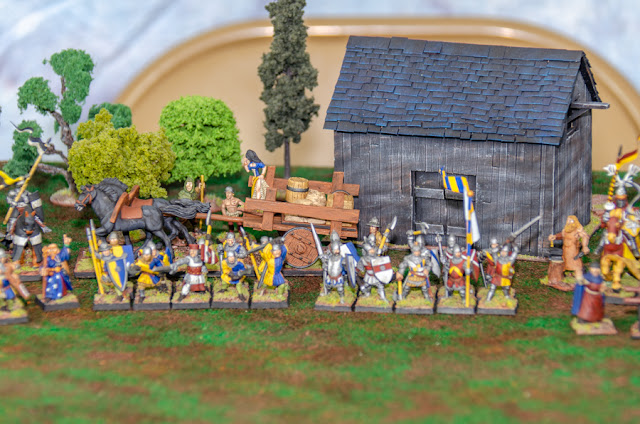 Closer up shot of the Baggage. Stupid me, I forgot to move the chair. The cart was made from balsa and bamboo skewers with the addition of GW plastic horses and cart wheels. I put it on a Litko 3mm thick 50mm x 150mm base. The baggage are some plaster Hirst Arts castings I bought of someone on the internet. I glued them to a 40mm x 40mm Rendera base. So it is removable. The followers are 3 Reaper Villagers and two GW Laborers.

The War Altar is made from Balsa, Bamboo Skewers and card. The relics are resin, from Max Mini here. The figures are from Reaper.

So there you have it. I'm frantically trying to get ready for Kublacon, I totally missed the mark on getting new gangs ready for Necromunda this year, so I'm trying to pull something together last minute.

Things are winding down as I get ready for Summer Vacation and Kublacon. It occurred to me that I hadn't updated how our WFRP campaign has been going in quite some time, so I'll try to do that in dribs and drabs over the coming months.

If you ever want to hear the games as they happened, the GM has them as a screen capture video on Youtube here. If you don't remember where the story was before this, I blogged about it here.

Here are a few drawings by Jason B. depicting some of the events of the previous sessions.

On to the next adventure:

(I think Jason B. took the notes here.)

Vincent shook Leopold and Sally awake. The sun was starting to rise and it seemed that the Skaven activity was much less. We inspected a corps of a dwarf and found a Dwarven hammer and a small pouch of silver which Leopold ended up claiming. The temple of Sigmar seemed quite enough so they decided to move indoors. Leopold had a strong opinion to find the dorms of the warrior priest to re-equip and treat the wounds they had. Sally led the way making sure to remain as quiet as possible. They made their way down to the dorms without drawing too much attention. The dorm was a good find. Armor and weapons were plentifully and the group did what they could to address their wounds. Lukas and Genaro were still lost but Vincent, Leopold and Sally were hoping they were still on the upper floor of the temple.The party finished with their preparations, very well equipped but still hurting from heavy wounds. The Temple was still abandoned and the party progressed towards where they hoped to find the Lukas and Genaro. A loud crack of a gun shot rang out as Vincent passed an opening in the wall. They kept their heads down and proceeded to the top floor. The scene was horrid. Bodies of Skaven and Talabhimers lay everywhere. Even more worrisome was the streaks of blood showing that some bodies have been removed, dragged away for some unknown purpose. A subtle grown came from a blood stained heap on the ground. It was Lukas barely conscious but alive. Genaro on the other hand was not there. Perhaps he made it out on his own. A hopeful thought, but the more likely explanation is much worse.It was clear that at least Gods Row was taken from the enemy. Vincent suggested we get a better view of the situation from the top of the temple bell tower. The city seemed quiet, until from out of the Law district a strange beam projected into the sky and illuminated the clouds! The strange colors projected on the clouds start to move and created shapes. An image begins to appear. The image in the clouds revealed a large horned rat which begins to speak.The rat’s screeched, the speech was simple and to the point, “Listen and you shall live, resist and shall die.”With a crash, the obsidian obelisk shattered and fell to the ground. The Skaven were in possession of the countess and the city was theirs. It was time to escape Talabheim. Another shot rang out as a Skavens bullet nearly struck Vincent’s head. At this point, the party decided to make haste to the North East towards the Taalgarten and then over the walls.The path was clear, the sounds of patrolling Skaven faded as the party made it over the wall and into the plains of crater. It was very cold, and the going was hard as a fog turned the group around. It was starting to look desperate until the hoofs of a Pistoliers mount clattered up one of the roads. Fortunately, the hail of the rider was friendly and the message was ever welcome: “Rally at Dankerood!” With directions from the rider, the party continued on their way and reached the town. The town was surrounded by a sea of tents, more refugees from Talabhiem. Once a Nobles retreat town, Dunkerood was now a refuge of all those displaced from Talabheim; unfortunately most inhabitants have been wounded.The party was met by a Corporal and they informed him that they had information in regards to Talabheim. The Corporal took them straight to the General in charge of military operations in absence of the countess. Vincent gave a full report to the General and the nobles that were also present. After Vincent’s report, the General ushered out the Nobles in order to talk in private to the group. The General enlisted the group into the Talabhiem army granting Vincent a commission as a Lieutenant, Leopold as a Sergeant and Sally and Lukas as Privates. The mission assigned was to create a resistance within the walls of Talabhiem, and send back regular reports of what was going on back to the General. With that, the General released them to the Corporal with then supplied them with necessities for the mission then left them to plan.Gear Split between Group:Storm LanternOil for 3 NightsishStudded Armor Full Suit (Lukas)Military Grade Writing KitBow, Quiver with 10 Arrows (Lukas)Gear Supplied to Each Individual:Soldiers back packSleeping bag (good)BlanketRations for 7 daysWater CanteenLong Cloak with HoodAnti ToxinsWater Tablets2 TorchesHealing PotiseHealing DroughtXP: Base Char Birth Relig Star Doom Halflg Ideas TotalVincent 50 10 0 10 10 5 - 5 90
Sally 50 10 0 10 10 5 5 - 90Leupold 50 10 0 10 10 0 - 5 85

So there you have the next few episodes, I'll try to dole them out until we get caught up.
Posted by Sean at 7:47 AM 2 comments:

Still working on cleaning up the hobby lair and trying to finish up some things so I can take my final army pictures for the Old World Army Challenge. If you haven't already you should really check it out.

All the tree bases are finished. I just need to put foliage on the three bare trees and then spray them with hairspray or something. The clump foliage ones are shedding pretty bad.

I also finally started blocking in colors on the peasants and monk altar guards. The monks are wearing funky ceremonial robes in the red and blue of Monfel. Mongeaux, on the right is getting the fair skin tone. Blanche Neige will be getting the rosy skin tone when I unbury it.

That's all for now.

A quick one before we rush out the door to go see Infinity Wars.

The trees just need flock and static grass on their bases and the metal ones need some foliage. 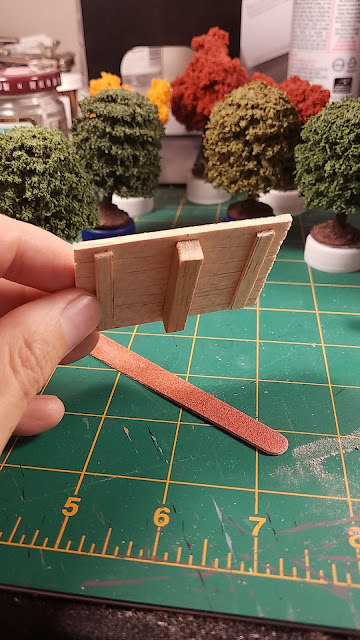 I started building my wagon out of balsa. I want to use Bamboo skewers for posts and axles, but can't find my bag of them. It's annoying. 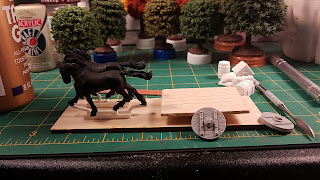 Here's a general layout with the plaster cast baggage in the background. I'm probably going to clip the horses off their tabs and pin them to the base. I can't decide if I'm going to base the baggage, glue the pieces together or leave them as individual pieces. I like the idea of being able to put figures or other stuff in the back.

Oh and the teachers strike is over. We went back to school Friday and will not have to extend the school year.

Upon some reflection and the realization that I was starting to acquire multiples of the same model, I decided to try and sort out my collection and tally what I had and what I had painted.

I got the idea from Anthony at the Lead Collector in his post here.

After my last post Anthony told me that he got the idea from You Magnificent Bastards. The link to the label of 100% painted Challenge is here. I only watched the first two videos to get an idea of what he was on about. Mainly I wanted to see what his spread sheet looked like. 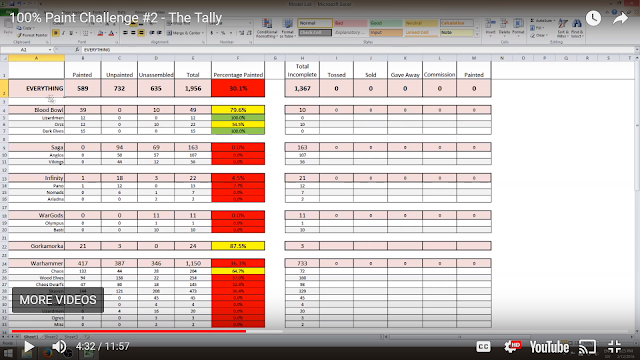 Here is his. Part of his plan was to shift his percentages by selling off some of his stuff and commissioning others to be painted. It appears he also just did a strait model count, no "this counts as two" accounting. 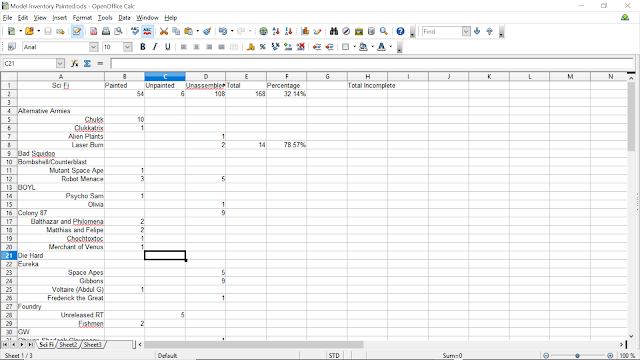 My rough start to a spread sheet. My intent is to not only catalog painted but also models and manufacturer. Not sure if I'll bother to update with codes and sculptor information, though that would be nice. I don't want to get so bogged down in minutia that I completely stall.

The idea right now is to make a sheet for each genre and then break out by Manufacturer. So far I'm starting with Sci Fi themed stuff as it is a much newer and smaller part of my total collection. I haven't sexed up the sheet with colors and formatting yet. That will come later. I'm using Open Office Calc because I refuse to pay Microsoft extra for a suite of programs. I'm still stuck in the mindset when all that shit was bundled with your computer and it pisses me off to have to buy it separately.