Merry Christmas to all. I hope you got a lot of gaming toys this year. 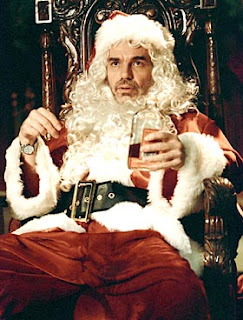 Welcome to Shaun of Shaun's Wargaming with Miniatures. An interesting blog that I had stumbled upon and recently re-found. I like the idea of comparing rule systems with set battles from history. I look forward to looking back at his posts during some holiday down time.

Unfortunately it looks like my big gaming plans with my brother have come to naught, but I suppose that is pretty minor. At least we got in one game. It will give me more drive to actually learn all these rules I have in the coming year.
Posted by Sean at 5:35 AM 3 comments:

Email ThisBlogThis!Share to TwitterShare to FacebookShare to Pinterest
Labels: followers

Got a chance to play Zombies!!! again, this time with my brother as well as the kids. The mechanics are pretty simple, but having another adult there helped to smooth things out. I forgot steps a whole lot less this time around.

As per last time I only took a picture of the endgame (sorry for the crap pic, it's from my cellphone). 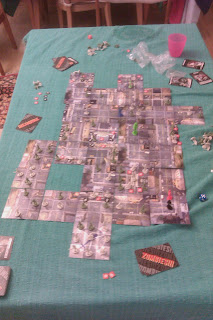 Final positions. Light green at top (me), blue near top (my daughter), red near bottom right (my son), black near bottom right (my brother). So the game went similarly to the previous. My daughter puttered around killing zombies with no discernable plan. My son similar but once the Lawn & Garden center was revealed he went there as he had the Chainsaw card. My brother went towards the bottom and right and had some success killing zombies. I headed up to the Police station at top left, where after initial success I rolled a series of one's and was overwhelmed by zombies. So after losing half my kills and being thrown back to the town square I moved to the Fire Sation (top center) which had been cleared of zombies by my son, to try and get some extra lives to the max of 5. That's when the helicopter pad came into play and it was up to me, with the lowest kill total to place it. As you can see I placed it farthest from me but at the time it was also farthest from everyone else. (Although perhaps I should have played it on the extreme left). My brother seemed poised for the win. My daughter ambled back to where you see her near the town square and I proceeded to roll one's for movement, shuffling along like a zombie, it seemed all too familiar. So the action came down to my son and brother. My son had "The keys are still in it!" card which gives you a move of ten spaces. He started in the Lawn & Garden Center at the top right and stormed down the boulevard to where you see him. My brother played the "We're Screwed!" card and placed 10 zombies directly in my son's path down the street. Now normally one would think he might be upset at being blocked from the goal of the heli-pad, but he loves killing zombies so much he was happy to wade through them. Sure enough he rolled mostly fives and cleared the street. In retrospect my son should have also played his "Chainsaw" card but it made little difference. It was at this point we realized that my son had killed 25 zombies and won the game.

Good fun but I sense a pattern here for my performance.

Well we're baking and preparing for Christmas with the in-laws tomorrow and hopefully getting in some Warrior Heroes from THW today.

Oh! The big green space man is Major Tom. My son thought he should be on the board.
Posted by Sean at 7:06 AM 2 comments:

Email ThisBlogThis!Share to TwitterShare to FacebookShare to Pinterest
Labels: Zombies

After my last post and musing on the term bloggering I thought I'd do a search for a family favorite quote about the traditions of the Royal Navy. What I found here surprised me. To quote the article "According to Montague-Browne, Churchill responded: “I never said it. I wish I had.”"


I could not however resist adding a subtitle to my blog. I must say my Rum consumption is down but that can change.


Anyhow I've contacted my brother and he is up for some serious gaming, so I should have something to share from the holidays.


And a hearty welcome to Tim (the Enchanter?) of Fidus et Audax (sorry to include you in the post about bloggery). He is a fellow 1/72nder and is a quite good painter.


Off to finish some chores and teach my last class of the year.
Posted by Sean at 5:13 PM 2 comments:

Well, despite not really posting much I have made it to 1500 views. So here is an image of a 1500 piece jigsaw puzzle of the map of Middle Earth. I think this would drive one insane faster than painting 2mm figures.

Unfortunately, what with the Holidays and all, gaming has been zero. For some reason I have been husbanding my posts (or post ideas) and then not committing them them to the blog. Bad blogmanship. Or is that bloggering?

So my immediate plan is to take some Two Hour Wargames stuff and try to press my brother into service. My folks still have all my old Army Men so they can be pressed into service like the old days, German paratroopers for Orcs etc.

I have a lot of notes for a Talomir campaign and am planning to do a combined RRtK (Rally Round the King)/ WHAA (Warrior Heroes: Armies & Adventures) campaign following the exploits of a dispossessed (wouldn't you know there were five s' in that) Mirholme (read Viking) noble. Most of this is not really my idea but following the lead of Ruaridh over at Talomir Tales.

Also plenty of reading to do on all those THW titles I purchased.

Oh yeah, I'm also coming up on 6 months since I started this thing and so would be eligible to list to Table Top Gaming News Blog Network. Which is of course where I first got sucked into reading blogs. Actually that isn't wholly true. I think the one that started it all for me was An Hour of Wolves & Shattered Shields.
Posted by Sean at 3:47 AM 4 comments:

So the first casualty of my attention deficit was my “now reading” list. I have now updated it with what I am currently reading (Fiasco by Thomas Ricks).

In the interim I read, or rather skimmed How to Build Realistic Model Railroad Scenery and another book in the series about modeling cities.

I then also read the Dark Horse edition of Conan: Free Companions

and started reading a used copy of Conan: The Ultimate Guide to the World's Most Savage Barbarian by Roy Thomas.

The railroad modeling books are good, but you can get a lot of this info on youtube I think. So definitely a good library borrow.

Free Companions was a fun read, covering the story starting at the end of Conan's run as a mercenary captain in the service of Kjoth to the destruction of his Zaporazian (sp?) Cossack band just before the story where he ends up on the island in the Vilayet Sea (the name of that story is not coming to me right now.

The Roy Thomas book has lots of cool art and is thematically arranged, sort of like an encyclopedia. Fun stuff.

I bought the Ricks book awhile back and I guess it is fitting to read it now as the US prepares to pull out of Iraq.
Posted by Sean at 5:34 PM 2 comments:

In an effort to avoid household chores and external Christmas lighting I thought I'd post about a site that I can't say enough about.

That site is Atlas of the Flanaess by Anna B Meyer. These maps are simply stunning and she has really put a lot of work into them. They seem to show the continent after the Greyhawk Wars, something that completely passed me by when it came out.

They come complete with heraldry and fairly detailed settlements, roads and borders. You can also check her group out on facebook.

Here is a low res image of her latest release: