You have only a few hours left to get in on this here.

In celebration of reaching 500 followers they're giving away vouchers for some cool stuff.

Head on over and enter for your chance to win.
Posted by Sean at 6:01 PM 2 comments:

Email ThisBlogThis!Share to TwitterShare to FacebookShare to Pinterest
Labels: giveaway

After reading about the Dragon Bait miniatures Indiegogo campaign for their Krakatoans on Blue's blog here, I decided to take the plunge and order some. I also ordered a few of the quirky little characters they have on offer.

What's cool about this project is that it has flexible funding. You will get what you paid for, even if it doesn't hit the target, which I think is a fairly modest one. Also check out their website here. Many figures to choose from, some of which are sculpted by Kev Adams and Tim Prow.

Also, don't forget to back the Diehard Miniatures Kickstarter. I have a link to the right. C'mon, papa needs a Son of Slomm.
Posted by Sean at 4:41 PM 4 comments:

The Region 10 USATF Cross Country meet in Albuquerque had me away from the painting table this Saturday, so no painting for me.

After last weeks performance at the Arizona State Championships, we thought our runners would be able to make the National championships. Unfortunately both our runners came in 40 to 40 seconds slower than that race, coming in 33rd and 46th respectively out of fields of around 65 each. Unfortunately only the top 30 qualify for Nationals. So next time. I think the difference in altitude may have played a factor. Phoenix is only around 1000 ft, while Albuquerque is around 5300 ft. My son said the course felt longer.

I'll leave you with a couple of pictures from the Petroglyph National Monument at Boca Negra Canyon. 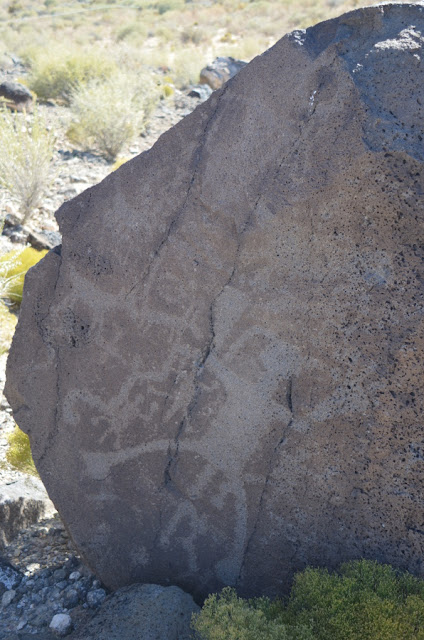 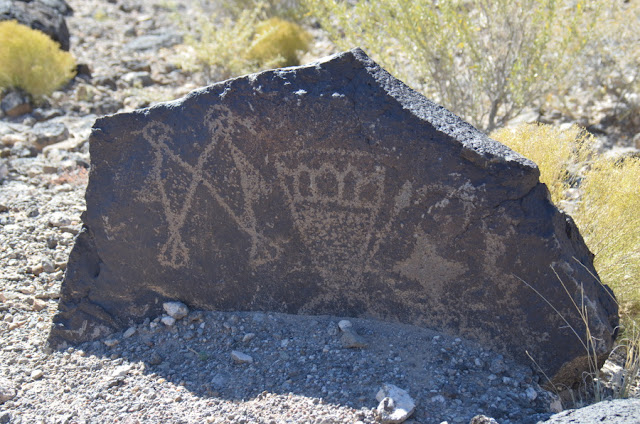 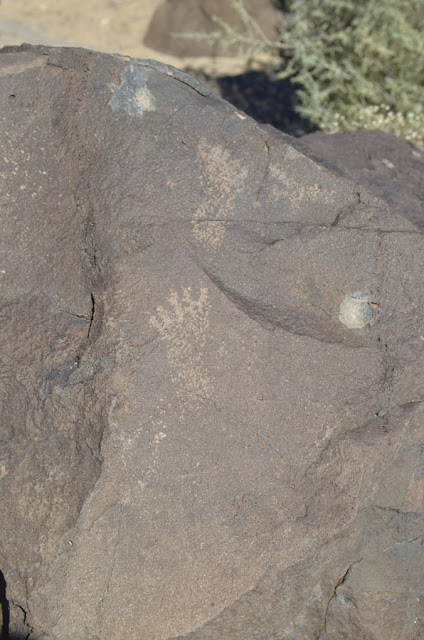 Hopefully I'll have those Skaven painted for you next week, and that pesky banner.
Posted by Sean at 7:28 PM 4 comments:

Just a quick link to the challenge here.

It's tough for people like me who have trouble formulating and then sticking to a plan, but it forces you to get a lot done.

Even if you don't participate it can be a lot of fun to see the fortnight challenge entries. There are some creative folks out there, both in figure painting and interpretation of the theme. ;)

Brushes at the ready.

Of Rat Ogres and misplaced banners

I'm giving you a WIP so that I don't cry and give up the hobby all together. Well perhaps I'm being a tad melodramatic. 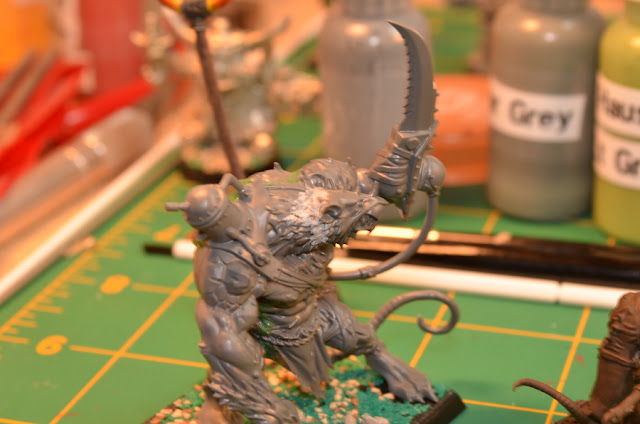 "Old Sword Hand" showing the Tamiya putty on his neck. I did a little filing on the top of his head. 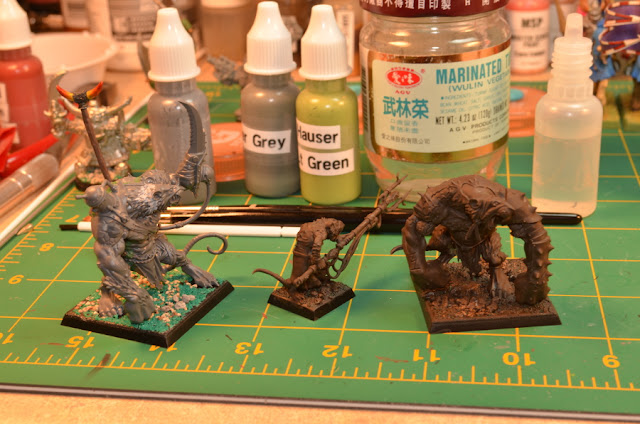 Minder and Knuckles were undercoated with a brush using Raw Umber. I normally use Burnt Umber but needed to resuscitate the Raw Umber and try to use it up before the whole 4oz. craft bottle goes bad. Of course later I mistakenly grabbed the Burnt Umber and base coated Sword Hand and did touch ups on Minder and Knuckles. I thought the color difference was wet versus dry. Doh!

I'll probably just leave it as I'm probably going to do a black ink wash anyway.

Oh and I seem to have misplaced Makari's banner. What a pain in the ass!

Keep your brushes pointy.
Posted by Sean at 6:07 PM 6 comments:

It's getting to be a habit that i don't have any painting to show you. Just getting busy and not managing my time well. 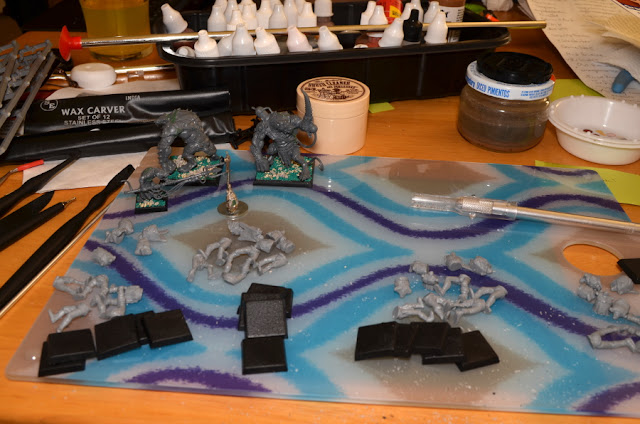 I've set up shop on the dining room table, where my son does his homework, so I can be there to remind him that he's still working when his mind wanders off. It's exhausting. 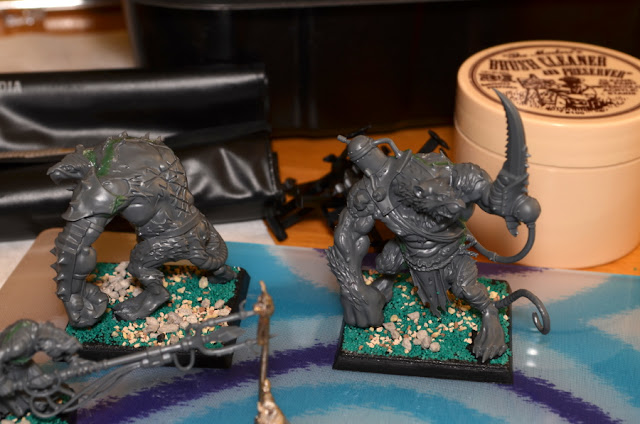 I did manage to put some basing grit down for the three skaven figures. I'm not as happy with my Green Stuff gap filling, but I realized that old sword hand needs the join between head and body filled. I got several suggestions on putties to try instead of Green Stuff. 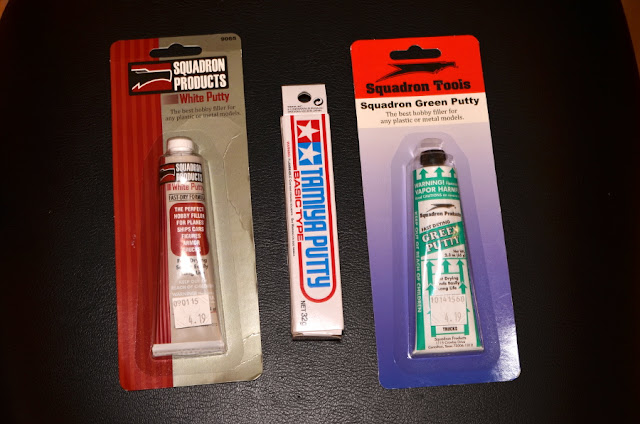 I was mostly recommended Milliput, but it doesn't seem to be available in any of the shops. 24 Cigarettes recommended Tamiya putty and I bought the Squadron putties because I was there and they were there. I'll let you know how it goes. 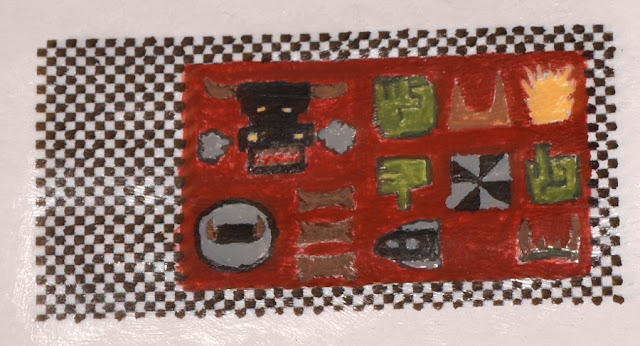 Evils of close up photography aside, the banner is shaping up. After painting in the black checks I haven't had the fortitude to paint this one. It needs a lot of touching up.

Of course it's not going to get any easier around here. My son crushed his previous race times in the State Championships and ran a 13:11 3K, coming in 7th in his age group. We're off to Albequerque next weekend for the Regional meet and I think he qualifies for Nationals with his time. Being our first season I'm not sure how it works.

Hope your having a good, and safe weekend.
Posted by Sean at 4:12 PM 2 comments:

Vermember and gearing up for Curt's challenge.

Not a whole lot of hobby actually occurring as I horde more lead and plastic. I realized I'm running out of time to finish a Skaven figure for Vermember and a little bird told me to look out for an announcement about Curt's painting challenge on the 20th.

So I realized I need to get serious about prepping more figures. 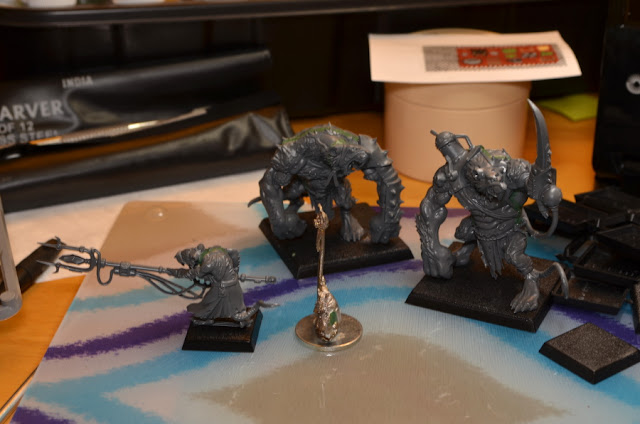 While I do have a few of the old Plastic Regiments Skaven, I acquired an Isle of Blood box not long after Age of Sigmar came out. So above are the Rat Ogres and packmaster alongside a 20mm Splintered Light Rat man that had a void in his shield that needed filling. The plastic models have a lot of nice detail, but the sprue attachments didn't cut as clean as I would like and were a tad difficult to clean up on some surfaces.

They were all two part, so I had to glue them together. It's not clear to me if they were meant to be snap fit, but they were hard to test fit and then pull apart to glue. They also were a bear to fit tightly and I had to green stuff the gaps.

I used Vaseline to keep the green stuff from sticking everywhere but the model. That works much better than water for me. Spit as non stick, yuck. I also had terrible timing. I started gap filling at 10AM and had to be somewhere at 11AM. I tried freezing my ball of green stuff and found it was still usable at around 6PM when I had time to finish. I didn't use it all up so refroze that. I'll check on it later this afternoon after my errands.

I'll try to do some posts about the Kickstarter loot that's rolling in, and maybe about the insane amount of stuff I've been dealing for on Facebook.
Posted by Sean at 10:32 AM 8 comments:

I could have posted the progress on this guy yesterday, as he was finished except for varnish, but we bought the wife a new car and that ate up most of the day. 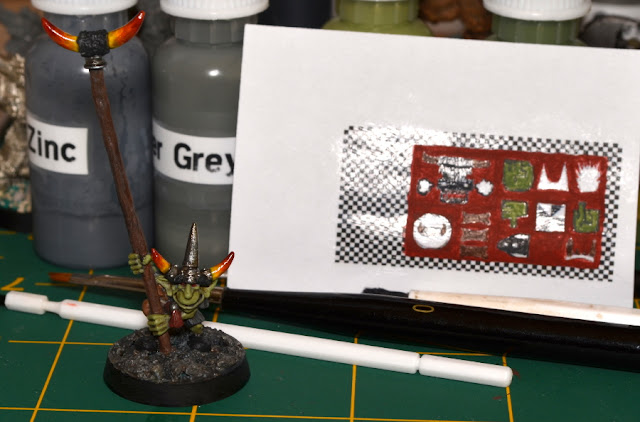 Sorry for the glare, too close with the flash etc. The decision to use gloss on the horns looks like a bad one with the flash. I'm sure in regular light it will look better. In the background is my interpretation of the Goff warbanner from 'Ere We Go! I'm doing it as more of a flag than a banner that hangs from a cross bar.

I kept his uniform subdued as I didn't want it to distract from the banner. I also wanted to try blending from yellow to red on the horns. I sort of made a pigs ear of it but I know what to look out for next time. I went with light up to dark, as per my natural world research from the black orc, not realizing that the old pictures of Ghazaghkull et al from 1st Ed 40K were red to yellow. Ah well.

I'll post better pictures in the next day or two. I have to replace my daughter's bike tires and take my son to track practice.

Thanks for looking. Oh and I'll talk more about the banner and Ork glyph's when I update.
Posted by Sean at 2:08 PM 8 comments:

Shapeways - Have you thought about buying from them?

At the end of September I was contacted by Pat Peverell from Shapeways about whether or not I'd be interested in blogging about the use of 3D printed models for the hobby and sent me links to their Miniatures and Model Train sections.

At the time I was rather busy and couldn't get to it. There was some mention in the initial email about sending me designs, along with more info, in the end I was only sent this info graphic of the process.

I was also given a link to their Tools page, for assisting in design of models if you are not versed in digital sculpting/ modelling. I only took a cursory look at that and played around with the Hero Forge for a couple of minutes before I got bored. I'm not really interested in making a custom miniature for my D&D Next character. It's a game I don't play.

Although most things I looked at in the above links were not my cup of tea, I did think there were some interesting options for those who game Naval or Air or Micro Armor. There were also a lot of things for people who use Model Railroad items for scenery and terrain. What caught my eye, however, was one shop in particular. Grim Dark Bits.

Why I liked this shop is it was making ships for Battle Fleet Gothic and some items for Epic 40K (Space Marine), both of which are no longer supported by Games Workshop. For some one, like me, who didn't pay attention to either of these games when they were initially released this might be an option for building up forces for these games. I haven't looked very hard, but ships and 6mm figures for these seem to be suffering from the same rise in prices on the internet that "Oldhammer" figures are experiencing.

The designer/ owner of the site himself says that he doesn't use the highest quality/detail prints for his fleets, as that seems to be pretty pricey. The reviews seem to suggest that the lower grades are good enough.

So my thoughts are, Shapeways looks like an interesting way to fill out pieces for smaller scale projects and gribblies for terrain.

I have yet to try it out though I suspect one or two resin bits I've purchased over the years have been casts of 3D printed models.

Do you have any experience with printed models in general or a Shapeways store in particular? What are your thoughts?
Posted by Sean at 6:30 AM 14 comments:


I also included a widget on the side to link to it and show how it's funding.

Lets see if we can bring this fantastic range to life.

Diehard Miniatures Kickstarter
Posted by Sean at 10:19 AM 2 comments: