Just a quick one for today. Sorry for not posting more. Jet lag is a bitch.


Just watch the video, or fast forward to the end. He gives a 5% discount code from Green Stuff World. The video is also interesting as he uses two different rollers to press patterns into insulation foam.

I've been meaning to get back to terrain building and buying some things from GSW.

I'll be back tomorrow with what I've painted this week.
Posted by Sean at 2:44 PM 2 comments:

Back from Cinque Terre

Just got back from a week in Italy to celebrate our 20th wedding Anniversary. So I thought you might enjoy a few shots from my cellphone. 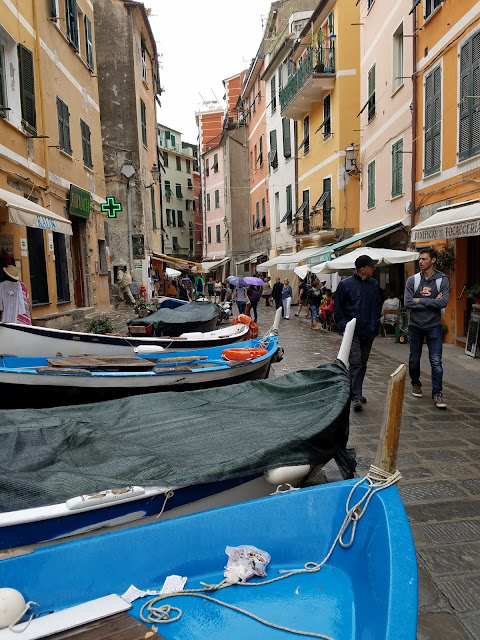 When we went to Vernazza the sea was so rough that they had brought all the boats in from the harbor. 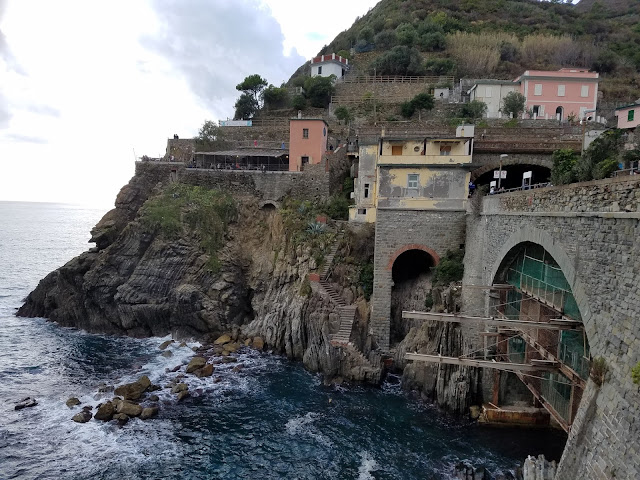 The next day we had a bike trip from Levanto to Corniglia, followed by a wine tasting on that terrace over the cliff in Riomaggiore. 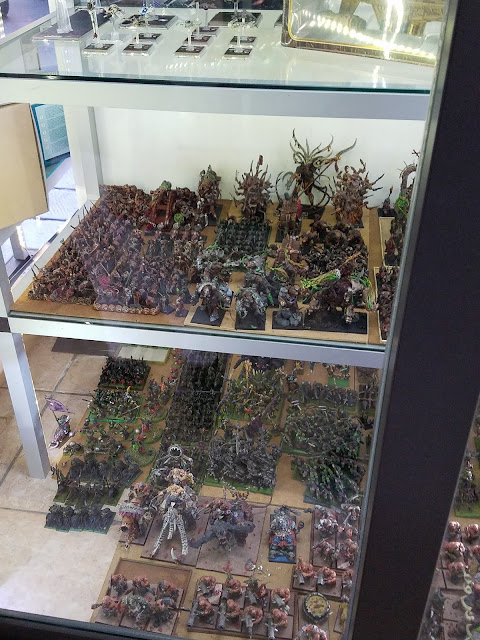 Lopez reminded me I should look for Oldhammer in Europe. This game store in La Spezia. They had mostly current GW offerings and a lot of Kromlech and a few Rackham models. I later also went to an actual GW store in Genoa, but that was just because I walked right by it on the way to dinner. 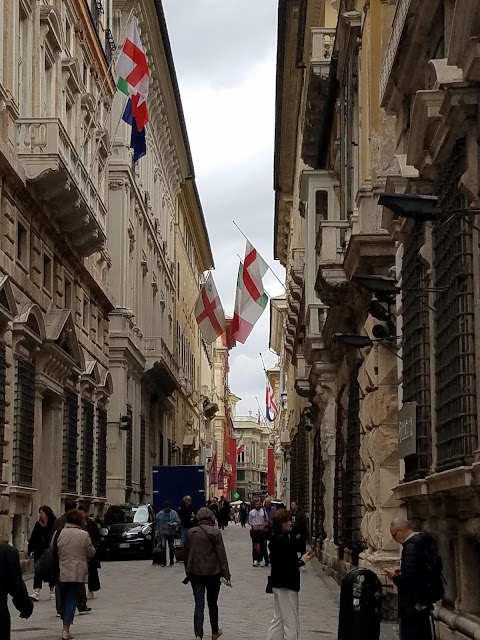 The Via Garibaldi in Genoa was interesting, there are many narrow side streets off of it. We happened to pick one that was lined with prostitutes in the middle of the afternoon, it was surreal. 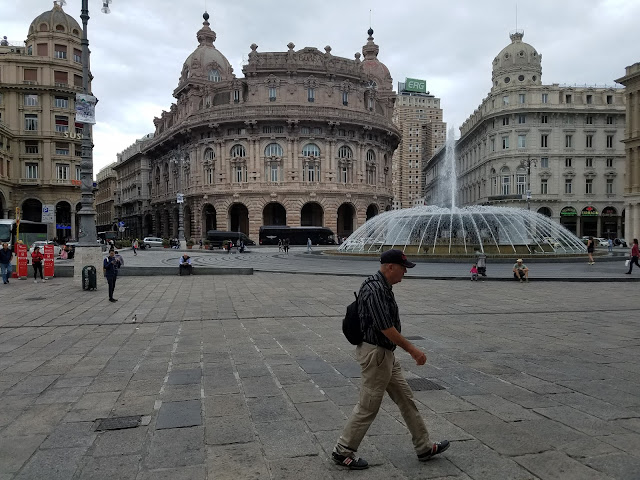 The Piazza de Ferrari in Genoa was interesting. 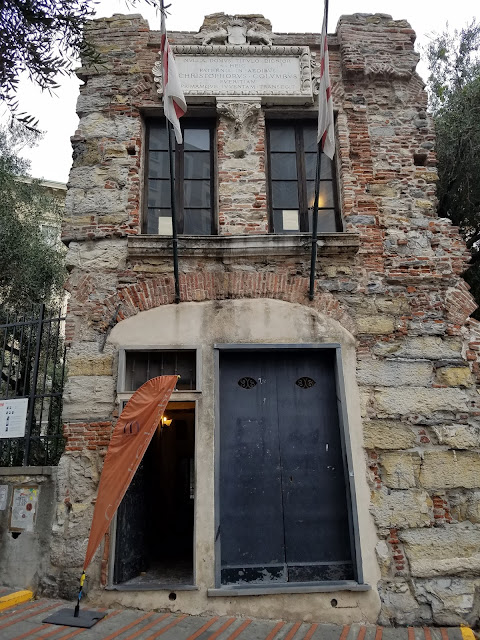 As was Christopher Columbus's house. It's tiny. 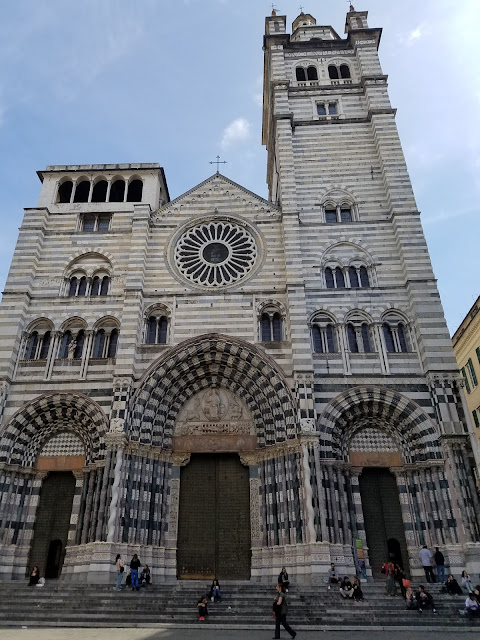 The Cathedral of San Lorenzo is another photogenic spot, but there's not a lot of room to get a picture. 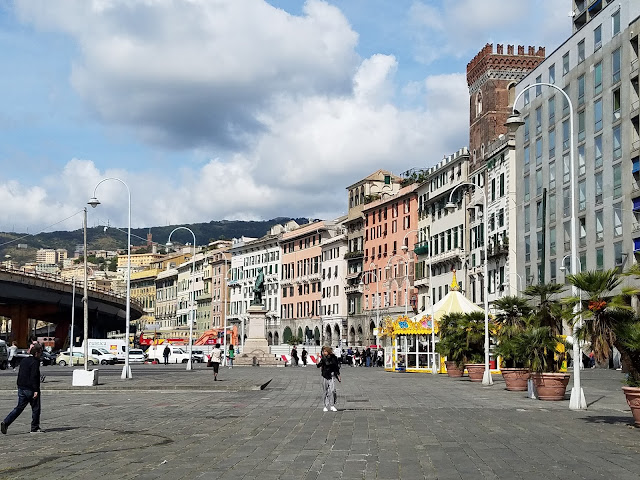 Square across from the docks in Genoa. 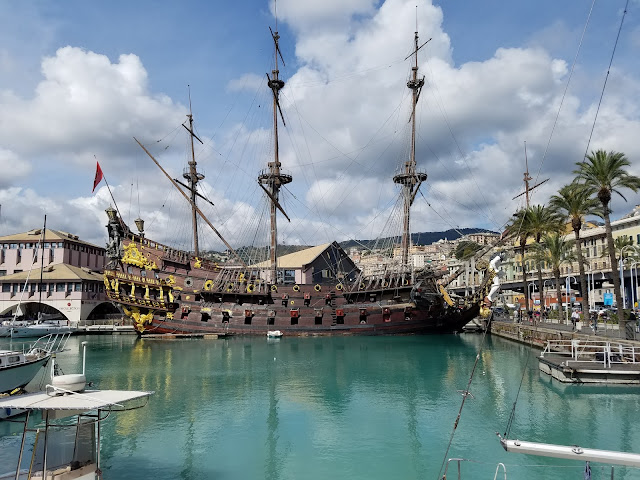 The Galleon Neptune, one pier over from the aquarium. I don't know what the deal with it was, but it was interesting to look at. We didn't feel like paying 6 euros each to board it. 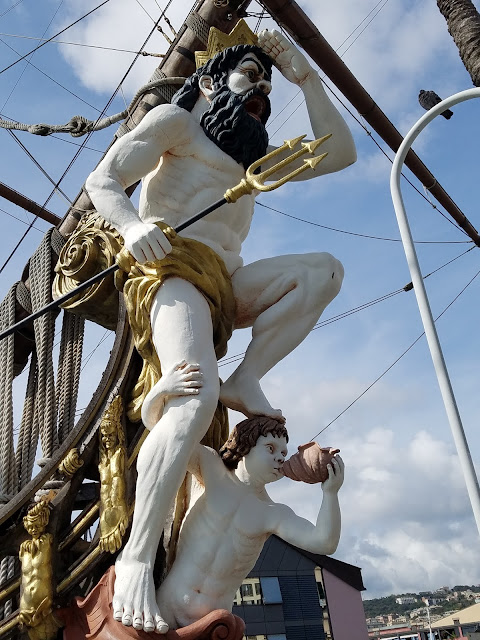 All in all a great trip. I highly recommend staying in La Spezia and day tripping by train into Cinque Terre. Super easy to do and La Spezia is an easy going smallish city. Genoa is a much larger city but you can see a lot by just walking around. In both cases we stayed at a Hotel that was about 10 minutes walk from the train station.

I hope to be back at my painting desk this week and getting myself organized for the upcoming things as we barrel towards the end of the year.

I'd also like to welcome Brett Besley and Mathia Gerner to the blog. As always, let me know if you have a hobby blog you would like me to link to.

Busy week this week as I had the in-laws in town for the holiday weekend and then spent Wednesday through Friday on Catalina with my son's 6th grade field trip.

We did snorkling, kayaking and marine science stuff. They kept us very busy. We spent about 8 hours at LAX as our flight home got delayed until midnight. It was very challenging wrangling all those kids in terminal for that length of time.

But on to the table. 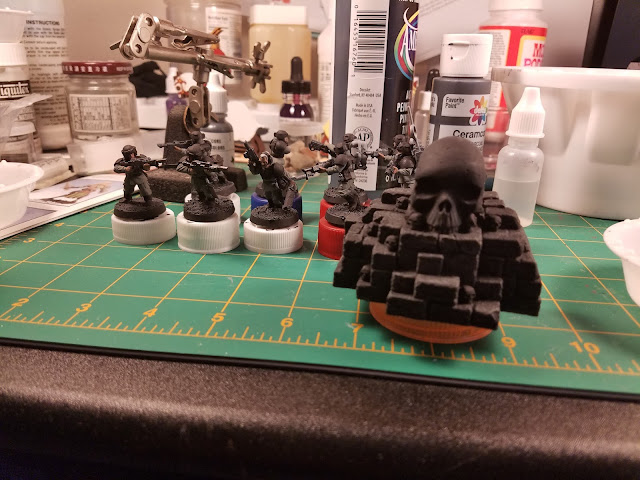 Nothing much has changed. I did drybrush a few shades of grey on the skull altar, but it needs more. The IG are pretty much the same as before. 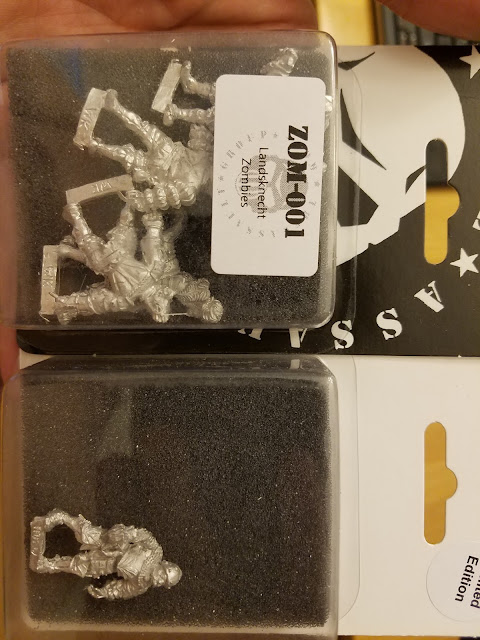 I received my Undead Landsknechts from The Assault Group Kickstarter, 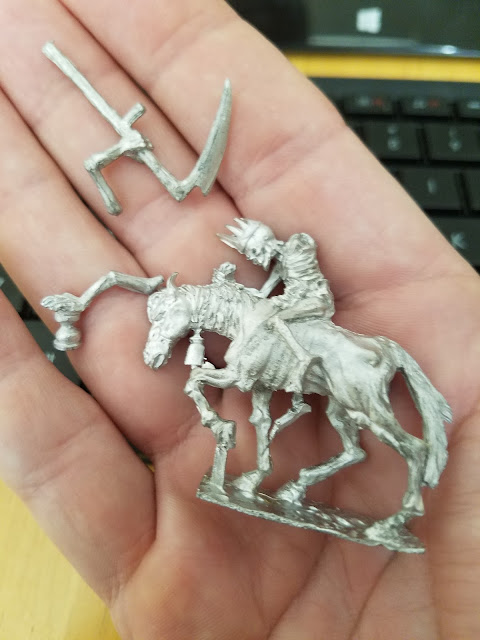 and my Triumph of Death skeletons from the Skull and Crown Kickstarter. So my plan now is to organize and prime all my undead for the upcoming Analogue Hobbies Painting Challenge. I think this year will be number 8. 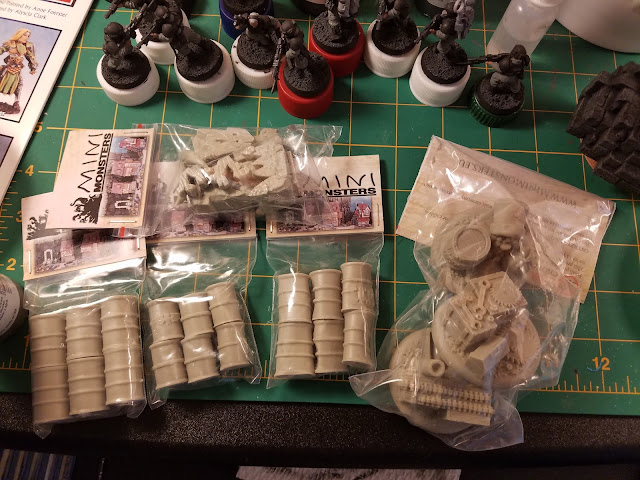 I also used my 20% off coupon from Mario to essentially get free shipping on these from Mini Monsters. Ork/Orc totem at top. Large barrels, small barrels, crushed barrels and objective markers. The prices and shipping are very reasonable and they have some cool stuff. I'm looking forward to painting these up.

Finally a welcome to new follower Dave Bone. I don't see a link to your blog, if you have one I'll link to it. Thanks for following.

My schedule will not permit much painting for the next few weeks so we'll see what happens with things.
Posted by Sean at 4:31 PM 10 comments:

The Ethos of Oldhammer

A discussion over on the Oldhammer in the New World Facebook group got me thinking again about what exactly Oldhammer is and why is there even an argument about it. Obviously there are many flavors of appreciation for the games and figures of the past, but let's revisit some commentary from the past on the subject. 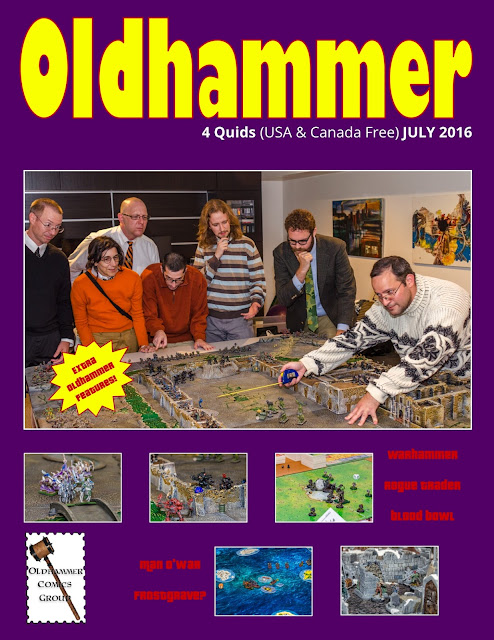 Now the source for most is Zhu's Oldhammer Contract and I think it succinctly gets at what Oldhammer should be about. Let me pull some quotes from this that highlight what I feel Oldhammer is.

Games should have a referee

"In Oldhammer Fantasy Battle there is a person who is in charge of the game. It's their job to check your armies are correct and everyone plays fairly. It's the Referee's job to remind everyone to take a Fear test when appropriate, and make the decisions on rulings where you've probably been used to 'dicing off'. The Referee never take sides, is totally impartial and his decision is final."

"The referee will probably set up the scenario, placing terrain and describing what the objectives of each army are, sometimes in secret. Sometimes it's just to wipe each other out, and sometimes its to capture and hold a specific location, or sometimes more complex - not all sides will have the same objectives," ... "neither knows what each others objective is, but the Referee throws them into this situation and the inevitable chaos that will ensue." ... "non-player forces are controlled by the Referee, often a threat to both sides, and their actions changing the goals of the scenario as the narrative progresses."

So to summarize, it is Oldhammer to have a referee who helps players muddle through the rules and adds friction to the game by introducing hidden objectives and random elements. This can also be achieved by agreeable players who can dice for such things without the assistance of a ref.

Don't be a slave to Army lists or manufacturer

"Go and burn your Army Books, you don't need them any more. We're going back to basics."

He goes on to say that you should use the points as described in the rules book to construct your forces however you like and not be constrained to Warhammer Old World Fluff. I think in the Oldhammer in the New World we have fallen around the convention of using the Warhammer Armies book as a basis, but no one has been overly fussed about it.

"You can use Old School Fantasy Battle to recreate epic battles from fantasy films and novels, from Moorcock to Tolkien, you're not tied to one particular gaming world, and if you want to just grab whatever minis you have and have a bash, that's good too." ... "you're not limited to the miniatures of one manufacturer."

So it's stated right there. YOU DON'T HAVE TO USE FIGURES FROM CITADEL FROM 1986 - 1992! Or whatever the arbitrary "not Oldhammer anymore" designation is. It's not expressly about the figures. Sorry collectors. That being said, just posting random figures of any old description is probably just going to start a flame war. I'm guilty of doing it on occasion, but I try to say how I'm going to use it in a totally Oldhammer way.

Is there a point to points?

"You do not need a 2000 point army to play the game properly." ... "Stop worrying about game balance" ... "As the Spartans will tell you, warfare has never been about perfectly matched armies squaring off at each other, and fantasy warfare even less so."

In the New World we have also established a convention of 1500pts for your army, but people always bring some cool and crazy stuff, so more often than not we just play with what people bring. Last year Tom Rabbits used 7 Giants in a battle against Airbornegrove's Chaos. It was epic. I am currently working on a Tzeentch force led by a Lord of Change as my general. Because why not? Oldhammer is not about being totally inflexible, it's about doing cool shit with cool models. Period!

That being said, if tournaments really float your boat, go for it. You will get push back in an Oldhammer group though.

So I hope that clears it up a little. Oldhammer is pretty subjective, but you can't throw out every single aspect of the aforementioned contract and still call it Oldhammer.

Feel free to disagree. Honestly I'd like to hear how you Oldhammer. Maybe we should have a feature in the Zine along the lines of "Ask an Oldhammerer" of "Dear Oldhammy".

Epic fail on the hobby front this week. I touched up the black metallics and flat black on the armor of the IG and then only primed the Dragon Forge resin terrain piece. 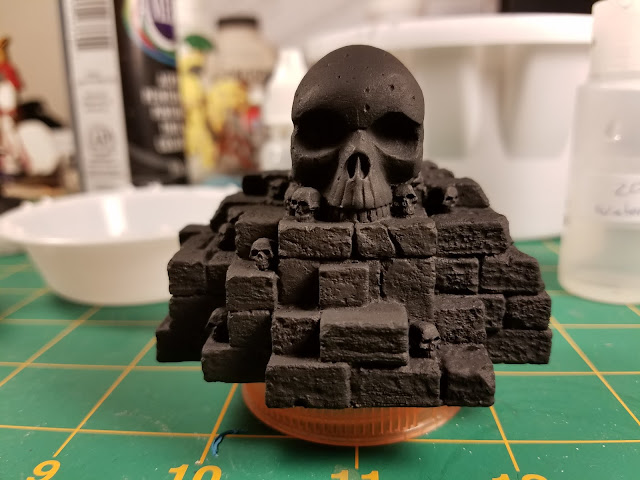 I've had a little trouble getting paint into all the nooks and crannies.

In addition to trying to clean up all my hobby junk for the impending visit of the in-laws, I have been fixing random plumbing issues and a hole in the staircase wall. 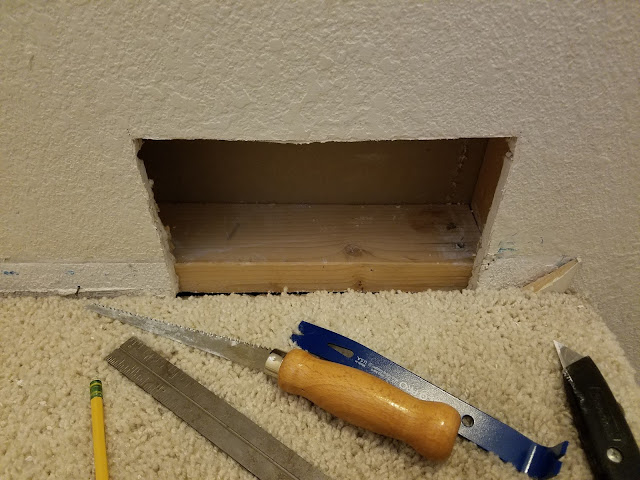 In order to get around all the breakage and tearing on the inside I ended up having to open a 10" by 6.5" hole all the way down to the footer. I had been putting this off for too long because I was trying to figure out a way to save the base moulding. I couldn't. The carpet is also a major annoyance. 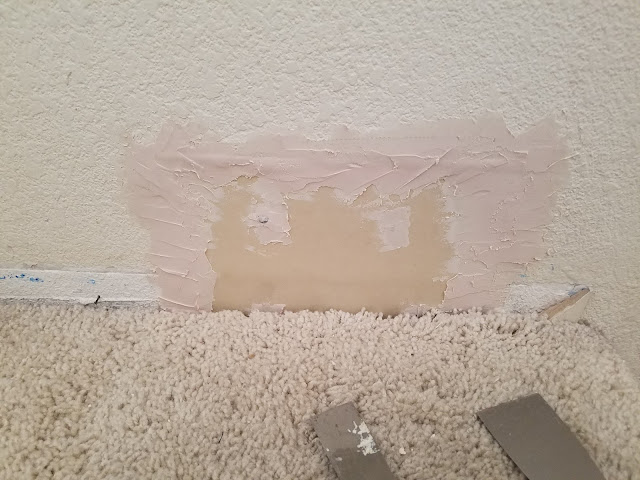 I've obscured what I did with patch compound. It's slightly pink but dries white. I have backed up the patch with a 12" strip of wood to give the patch pieces something to brace against. Two screws hold the wood to the existing drywall. Two more can be seen near the top middle securing the patch to the stip. I added too more down near the carpet into the footer to make that area more secure. I had to cut two pieces as my patch plaster board is half the thickness of what the builder used. 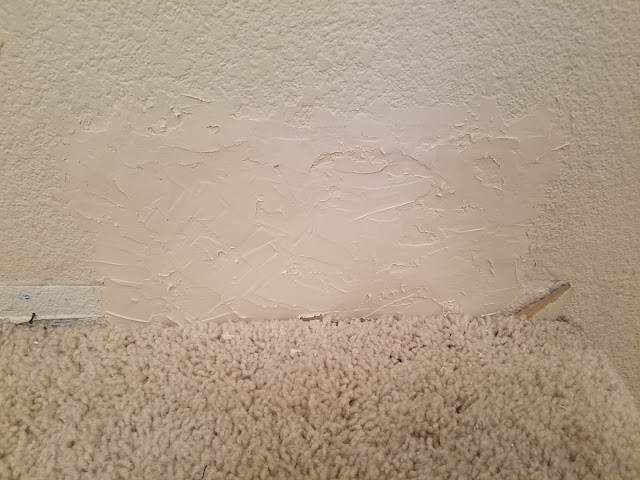 The patch this morning. Obviously it needs some sanding and perhaps a touch up of some of those voids near the top. Putty was applied at three different times over the course of yesterday. I'll eventually finish it off with some texture spray. I think mine is some version of knockdown, not straight orange peel texture.

Thanks for looking.
Posted by Sean at 8:10 AM 6 comments: