After a little correspondence with Ray I thought that I should perhaps give a little more info about my graphics editing software of choice, GIMP.

GIMP (GNU Image Manipulation Program) is an open source graphics package that is most like Adobe Photoshop. It is totally FREE and don't let anyone tell you otherwise.

It can be found on the web at http://www.gimp.org/ and there is an online help and some tutorials there.

The add-on or modification that I use is GPS (GIMP Paint Studio), all this gives you is a lay out like I have in my video here. It also gives you some brushes and presets. The presets I personally have never really explored.

In lieu of installing GPS you might be able to configure GIMP to give you the "Display Navigation" tab in a vanilla install by following the ideas in this tutorial video here.

And a search for "gimp setup tutorial" on google yielded this useful thread from gimptalk: http://www.gimptalk.com/index.php?/topic/13002-setting-up-gimp-for-artistic-work/

And rather than make big link list I'll just direct you to a google search with the term "gimp tutorials" here.

I've been using this program for a few years (possibly 5 or 6 I'm not sure in my old age) and for me it has been worth it. The learning curve is steep but free versus $699 for photoshop, the choice is easy for me. Also photoshop is fairly complicated as well.

Lastly you can use photoshop brushes in GIMP but not some of the other things. Look to deviantart and the internet for lots of brushes and textures.

Hope this helps those in need and it is hands down my favorite graphics software.
Posted by Sean at 8:36 AM 1 comment:

Or what would you do.

The other day while in town my brother and I went to two Comic Book/ Game stores. At the second I came across Conan Munchkin and the Original 1976 SPI version of Napoleon's Last Battles. (Boardgame Geek Link)

Now, apart from the difficulties of fitting it in the luggage and the ire it would engender in SWMBO, would you buy it for US$60?

The ebay sale link on BGG has the TSR version for $27US but they have trimmed the maps. I have no idea abut the condition of the one at the local store, I didn't open the box.

No clue if it is even still there, just one of those moments of wondering if I made the right choice in not snapping it up even though I don't really play or have much interest in Napoleonics.

I'm also too lazy to write up my rules analysis from my RRtK battle and I am running out of time for my 3.5 posts per week goal.
Posted by Sean at 9:14 AM 2 comments:

Those of you who follow this blog are already probably aware of or following Dalauppror but I thought that his post on his basing method was too good not to share.

What I like about the tutorials is that he clearly shows his color choices and even gives product numbers for the things that he is using. Also you can see a variance in the schools of thought on basing in the two, slightly different techniques he uses. The salient difference being, basing unpainted figures then priming the whole stand together versus basing painted miniatures using a paint and glue mixture.

My own personal basing attempts in the 90's were very amateurish. I think now I would fall into, or do fall into, the base then prime camp.

Also a welcome is in order to the author, Dalauppror the site is great and his painting style is fantastic. Thanks for following this humble blog.
Posted by Sean at 11:24 AM No comments:

Happy Birthday to me (the blog that is)

Well it was actually yesterday, but I was busy galavanting around the Arboretum at UC Davis and cursing my now 4 month old hip/ groin injury that doesn't seem to want to heal.

One of the things we did was pull out my old Traveller books. My brother has been holding them as I gave him all of my role playing stuff when I moved out of the house at 18.


It was a nice trip down memory lane, and now I know where I can go to get a resource for reinvigorating a sci fi campaign. Now only to buy 5150: Star army and maybe 5150: Star Navy when it comes out.

As far as the blog goes, not too bad for a blog with no real goals, but obviously one could do better. Look to The Angry Lurker, Don't Throw a One and Frontline Gamer if you want to see how it's done.

I'll be going more blog lists and trying a little more to cross promote in the coming year. My goals are still nebulous, and I'll try to define them more in my own mind. The one thing is to get on the TGN Blog network. In the words of Mike Tyson "I'm gonna make you love me!"

Next up will be some set up of the re-tool of Blod Orn and some more Nuts & Bolts about the upcoming Talomir campaign. I'll try to post the blow by blow here while making the posts on Talomir Tales more narrative.

Perhaps the goal should be to double my totals thus far, or rather get twice as much done in one year. So that would equate to roughly 180 more posts, 12,000 more views and 86 more followers. Something to shoot for.
Posted by Sean at 7:39 AM 4 comments:

Since I am traveling again I thought I'd try this app again while still at home, connected to my network.
So here are the two things I bought myself for fathers day.
Square shooters is an interesting dice game. I mainly bought it to see how they get the deck of cards on the dice. I thought it might be a nice solution when using a playing card activation mechanic or for characterization ala Tony Bath.
The Conn title is a Dark Horse publication, but a different series from the others I have read.
(Crosses fingers and hits submit.) 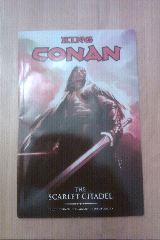 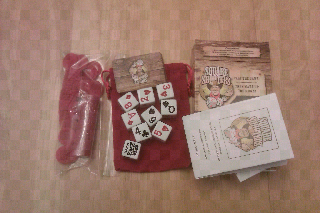 Well it worked but it looks like it would be better not to use it for AAR's. The pictures were automatically scaled down, even though I took them with my phone. You also don't seem to be able to place them in the text. Also I would need to remember to place the pictures backwards. I put the dice picture in first and it showed up second.

So over all it will work, but I'll try to use it only as a last resort.

Also stupid Auto complete put down Conn instead of Conan. >:[
Posted by Sean at 7:26 AM 1 comment:

Recently on the THW yahoo group Ruarigh Dale, of Taomir Tales, asked for any takers to assist in his ongoing RRtK campaign. Seeing as how I am constantly threatening to play this I jumped at the chance to join in the ongoing campaign.

I thought that it would be only fitting that I choose Mirholme (the Viking equivalent) but I do have figures to play Altengard, Tereken, or Capalan as well.

When he mentioned that one could also possibly dovetail a WHAA adventure into the campaign I became positively giddy. I think that my Blod Orn campaign would fit in nicely with the current events of Ruarigh's campaign, even if the years are off since he's been playing for awhile.

In his campaign Gunnar Broadaxe is attacking Olaf Squinteye in a civil war to establish dominance over all of Mirholme.

As we may recall, Hemming Wulfgarson had been exiled following intrigues around the succession to the throne of Mirholme. The posts on this can be found here. So it is not hard to see Gunnar as a supporter or distant relative of King Haakon and Olaf as the Grandson of the previous King. I'll just have to move the year from 986 to 990 or 991.

Anyway this looks like the kick in the rear I need to get myself gaming. I've already accepted the invite to post on Talomir Tales and can't wait for more info on my upcoming role in the campaign.
Posted by Sean at 6:42 AM 1 comment:

Yesterday was Flag Day here in the US, so it probably would have been more appropriate to post this yesterday. But I figured I'd put my jet lag insomnia to use and work on this today.

How I textured Ray's Boissleau Flag

I've actually been back for a week now and I think my internal clock is more messed up than I thought. For the second day in a row I've woken up at 1AM.

We went to Beijing for 12 days with a side trip by train to Luoyang. All in all it went pretty well, although my Chinese was too rusty for my tastes. I did manage to get us fed and where we needed to go so it wasn't that bad. We mostly took the Subway around Beijing, there were too many of us to fit in one cab so we stuck together for the most part.

I tried to blog from my phone but it didn't seem to work and I couldn't even access blogger at all to read blogs while in China. Some people I know have set up VPN's to get around the firewall, but this is the first time I've had any internet devices in China and I did not do my homework before setting out.

Here are a few pictures that my daughter took: