One of those year end posts that everybody loves. I'll try to keep it short and sweet.

Unfortunately I cannot go to Kublacon in 2019. We have a family trip that we postponed last year and it was rescheduled to conflict with the con, so guess what takes precedence. It's all good though.

Welcome to Dark Knight, thanks for following the blog. If you have a hobby blog, let me know and I'll add a link.

Thanks for looking and commenting. Happy New Year.
Posted by Sean at 12:11 PM 2 comments: 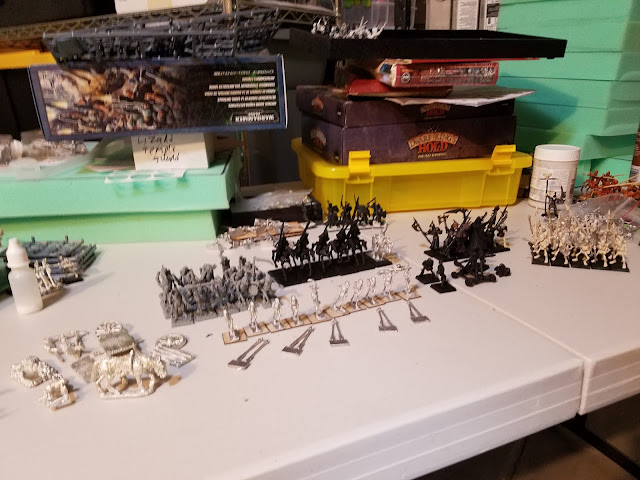 Here is the 1000 points arrayed. Nowhere near as far along as they should be. Oh well. 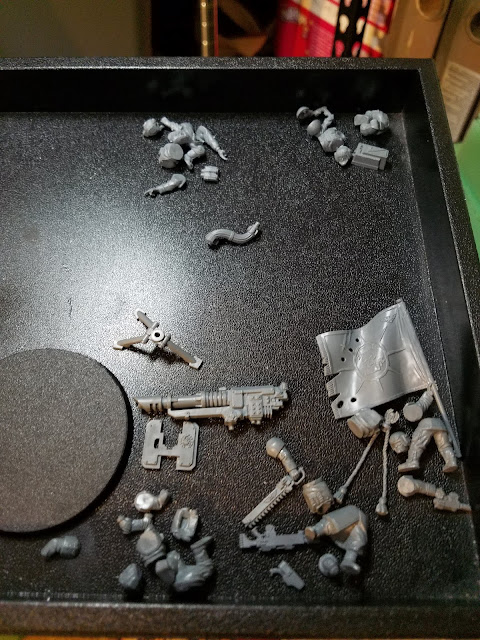 The Command section I'll be adding to my existing IG squad for the local campaign I've been invited to. I'm trying to ridge the gap between the compendium and 2nd Ed 40K IG lists with 2000 era figures. Above is the medic, Lieutenant, banner orderly and Lascannon team. This is the squad they will join. I painted them last year. I will swap out the Vox Caster for a guy with a grenade launcher.

Thanks for looking, happy painting and happy holidays.
Posted by Sean at 7:55 PM 2 comments:

Wow! It's been awhile since I've post a Table report. That was not the plan.

Here is the Army I'm assembling for the Old World Army Challenge. I of course over bought and so have way more than 1000 points here, but you get the idea. 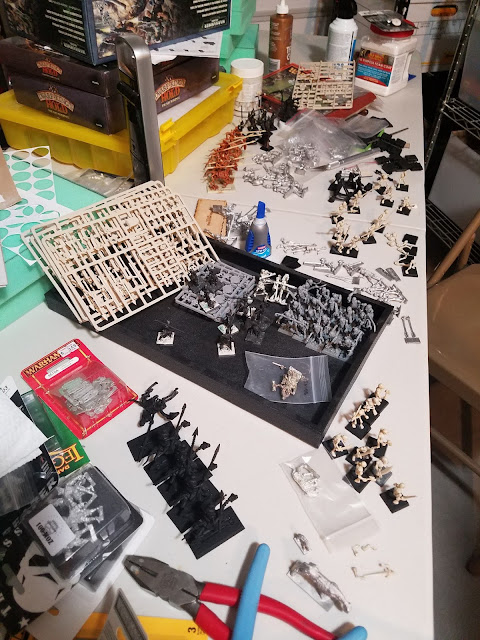 This is my setup in the garage. I'm trying to relocate my hobby stuff in there to stop taking over the whole house. It is now very cramped in there.

I plan on using a mixture of Games Workshop, Reaper, Mantic, Skull and Crown, and Upstream Games House miniatures in this army.

I'll post up a better look of the units in the coming weeks. As you can see I have a lot of assembly to do before January 1st and I need to write up my starting post for the OWAC.

Thanks for looking and commenting.
Posted by Sean at 7:40 AM 12 comments:

White Dwarf Guides for building and painting an Undead Army

As usual I am all over the place and having trouble finding the focus I need to get things done. I think last time I mentioned that I would share some resources I found in White Dwarf that deal specifically with putting together an Undead army. I found those in #'s 142, 211 and 226 (Thanks, Rochie!). So let's tuck in, shall we? Trying to give you a little more of the cover for reference.

The Official White Dwarf Guide to making a 1000pt Army

With people in full prep mode for OWAC 2 there can be a lot of angst when it comes to making your 1000 point army list. One tactic would be to just give points to what you want to paint and then any amount over the 200 points per month is just not considered.

For the last challenge, I attempted to make a strict, legal 1000 point force. 1016 I think. I ended up adding a lot of stuff right at the end that brought it up to around 1300 and some, War Altar and wizards mostly.

We've all heard that the Armies book, and its minimum troop requirements, were designed for 3000 point armies. It's also been kicking around for quite some time that you could just reduce the troop minimums by 1/3 or 2/3 for a 2000 or 1000 point army. Airbornegrove pointed out to me where you can find this in writing, White Dwarf 144. 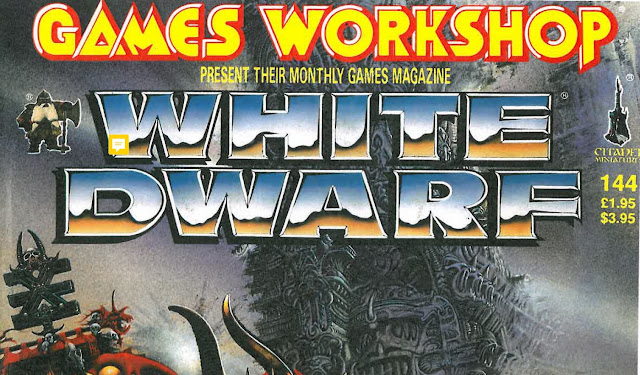 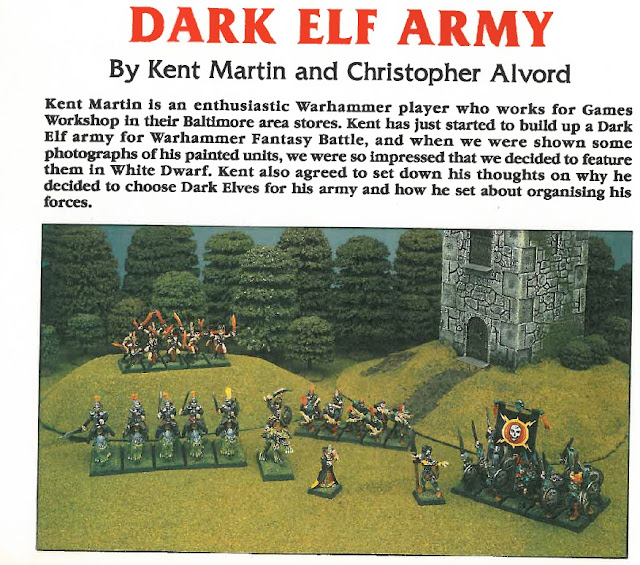 It's a pretty good article on a person's thinking for how they're going to start building an army, and I think what the intent of the OWAC really is, rather than being a straight up painting competition.

See, this guy thought so too. 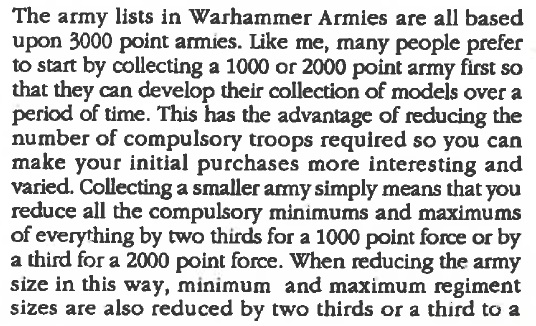 There it is in Black and White. reduce compulsory numbers by 2/3 for a 1000 point force.

But the minimum unit size is still 5 models. 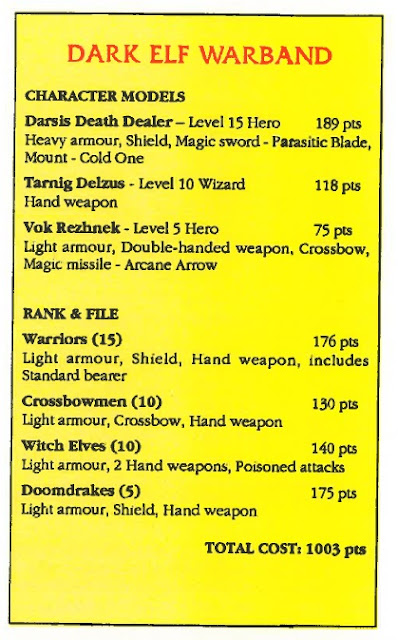 Anyway, thanks for looking and commenting. Next up we'll be talking about assembling and painting and Undead army.

So over on the Oldhammer forum they are having a Greatest Battle Report of 2018 contest.

If I had paid attention I might have put up one of my reports for consideration, but I don't do forums very much anymore.

Or you can go straight to the voting site. https://www.surveymonkey.co.uk/r/JWMDTZS

I voted for The Siege of Graveskul, of course. There are other fine reports on there as well.

I will say that I think the report needs to be the total package. Good visual representation is at least as important as a good story, otherwise we could all just write fiction and save all the time and effort we spend on collecting and painting. 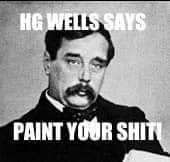